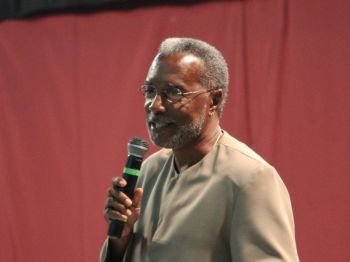 ZBVI 'Honestly Speaking' radio moderator, Claude Skelton-Cline has called for remnants of slavery, such as the names of people who were involved in slave trades, to be removed from the Virgin Islands history books and called out for the role they played in the oppression of people of African descent.

"We must remove them from the history books of our curriculum as heroes and sheroes when they were full participants in the subjugation, in the oppression, in the terrorisation of a people simply by their skin colour," he said on the July 7, 2020, edition of his show on ZBVI 780am.

"Things like the Sir Francis Drake Channel, a known slave trader, a man who terrorised this country, territories across South America, terrorised across the Caribbean, and we hold him up as a hero and he's not a hero," he said.

Skelton-Cline's comments echo those made by another radio host, Cromwell Smith aka 'Edju Enka' in January 2020, on the same radio station.

“All the places that we have is named after these murderers and thieves," Smith told the listening audience on an episode on his Umoja show Thursday, January 9.

His comments came after his guest expressed displeasure over the names, “we talk about young people and what we expect from them… but look at our historical places in the BVI... Blackburn highway etc… these men were pirates, there’s nothing good about a pirate,” guest Ken Boynes uttered.

Skelton-Cline also called for the ending to Territory Day celebration in favour of a 'Virgin Islands Day'. "We are not a territory, we need to reject the names that have been ascribed to us as a corporate body and celebrate who we really are as Virgin Islanders."

He said names like Sir Francis Drake should be banished from VI's curriculums. "He is not the kind of name that should be spoken of, taught of, in our schools in any beneficent way. We must call these people out for who they are."
Add Comment