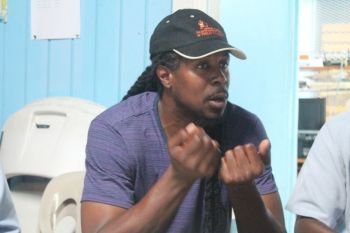 Time to decriminalise marijuana in the BVI - Karl M. Scatliffe

Former President of the BVI Taxi Association and Progressive Virgin Islands Movement (PVIM) Fourth District Candidate in the 2019 General Elections, Mr Karl M. Scatliffe, says it is time the territory follow international trends and decriminalise marijuana, however, there must be restrictions in place to prevent drug abuse from vulnerable groups.

Mr Scatliffe was at the time speaking on the Tuesday, October 15, 2019, edition of 'Honestly Speaking' with host Mr Claude O. Skelton-Cline, when the conversation turned to marijuana use in the territory.

"Growing up here... we were users when it comes to marijuana... back then I can tell you, it was like a hippie era, there was a lot of marijuana use," he told Mr Skelton-Cline and the listening audience.

However, he noted that today with youths, "because of a sporting perspective, I don't tolerate that... because you get tested on a regular basis," and as such, from a sports professional view he is against the use of the drugs with young adults and athletes.

"The other part of it like you said, was just a passing thought thing," he noted in agreeing with Mr Skelton-Cline that the territory was never high on the use of the drug, rather, as a gateway for trafficking.

"We weren't the type of persons to be hooked on that type of stuff... but the marijuana it was illegal... and we did it."

He however noted that in today's age, society is trying to find ways how the drug can be consumed and be accepted as the norm.

According to Mr Scatliffe, while many are being incarcerated for the use and possession of the drug in small amounts, that only leads to an overpopulation of the prison system.

"From the research that I've seen and the conversations and the stuff that I've seen... the marijuana, it's a natural something that works in different ways for different people so to decriminalise it, yes I would," he told Skelton-Cline and the listening audience.

"Right now in this day and age this is the direction that every country wants to go, why not us?" he question.

Mr Scatiffe noted, however, that with making the substance legal even for medicinal purposes, it is still a drug that can have adverse effects on youths and as such, they would need protection via laws governing the use.
Add Comment