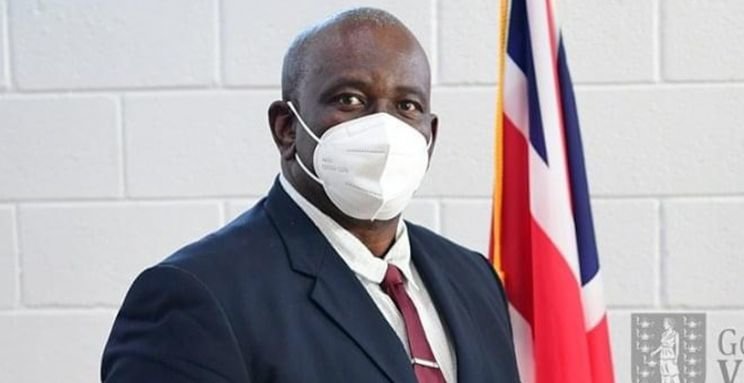 Officially, the BVI has recorded 47 cases of COVID-19, but health officials believe that there are over 1,400 undocumented cases across the Territory and are cautioning persons to be extremely careful.
Providing a breakdown of the cases in the Territory, Health Minister, Hon. Carvin Malone in a live update, shared that 38 cases are still active.

"We believe that we are seeing the tip of the iceberg and there are more persons possibility infected in the population who are asymptomatic and can readily spread the disease. Which means that we may have many undocumented cases of who are transmitting the virus. While we don’t exactly know how much spread is caused by our asymptomatic group, current estimates place our undocumented cases at approximately 1, 482 persons at a minimum," Hon. Malone stated.

He added, "And let us not forget that while many persons may have mild disease, some will be severely affected and may require the usage of one of our eight fully equipped ventilators. "

Taking the public through a sequence of events that led to the COVID-19 spike that saw the BVI move from 8 positive cases on May 28th to now 47 positive cases as of August 31, Hon. Malone shared that since Case #12 was discovered on August 17th the contact tracing efforts of health surveillance teams have resulted in the investigation of 219 primary and secondary contacts.

He stated that the BVI is experiencing small clusters of cases that are disbursed, but interlinked.

He stated that their primary and secondary contacts are further disbursed throughout other communities on the Eastern, Western and Central districts of the island and on Anegada.

"Our medical teams and public health professionals have emphasised that if we fail to take decisive actions the BVI will be heading towards an epidemic. The majority of cases, 70%, have been discovered through contact tracing, with 32% of all cases being asymptomatic," the Minister stated.

While bars and night clubs have been signalled out for the recent cases, the Minister shared that the two cases that are currently hospitalized did not contract COVID-19 in the nightclub or bar.

"There were the unfortunate primary contacts of persons who engaged in mass gathering events. Then there are others who unwittingly contracted it through household contact or work colleagues," the Minister stated.

He added, "While we encourage the requisite public health measures, there exists an unwelcomed level of unacceptable social behavior and suspected criminal activities that have contributed or may have allowed the outbreak to re-emerge, with substantial new infections and consequences."

Hon. Malone stated that in the absence of a strategy that would completely eradicate the virus from the Territory, officials have transitioned to the ‘Manage It’ Orange Alert phase of the pandemic response.

The main objective of this phase, he stated, is to minimise active transmission in the Territory as well as the negative physical, psychological, social and economic impacts.

"Let us not fool ourselves. A COVID-19 test is not a vaccine. Whether someone travelled intra-island or if you yourself travelled intra- island the risk of transmission one way or the other is real. The measures apply to everyone As we learn to live and work with COVID-19 we must take individual and collective action to keep ourselves, our families and our wider community safe," the Minister stated.
#COVID-19  #vaccine  #Covid
Add Comment