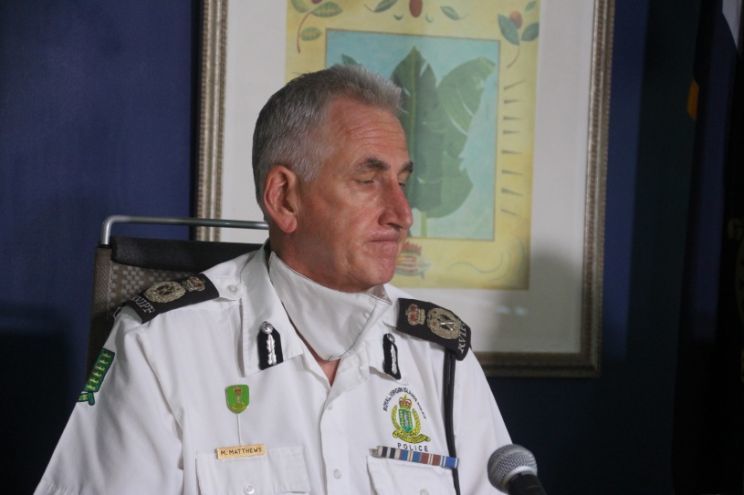 Commissioner of Police Michael Matthews, who is on his final leg in the post, has come under fire from members of the public for his statements concerning the recent daring murder in Fish Bay.
During a joint press conference late Thursday, March 18 when Matthews was asked questions from the press, he divulged that more people were coming forward to assist Police with the recent murder.

He was specifically asked what was being done for the psychological health of the driver that was behind the murder victim, Deverson Williams.

Commissioner Matthews replied: "The individual in the second vehicle escaped unharmed and has been helping the Police in relation to this matter. He is somebody that knew the victim and therefore was able to give a first-hand account of what he saw."

"The good news is that more people are coming forward, and we do have people who have been helping us since Tuesday to try and help us piece together those dreadful events," he added.

However, residents were not pleased by the Commissioner's statements, and some took to social media to register their disdain.

"This right here is the perfect example of why persons are afraid to come forward with information. You just put a target on that individual's back during the course of a live investigation, in which the crime is literally a couple of days old," stated former political candidate of the Progressives United Party, Dirk Walters via his Facebook page.

He added, "Why would you publicly pinpoint the person that's assisting you with gathering intel or providing you with info. There are already tons of videos on social media going around from the scene right after the killing, and it doesn't take a Rocket Scientist to figure these things out. This is terrible. We don't trust you."

Several others reacted to his comment, such as Deyanara Panther who said: "Exactly! So people will never help no matter what no one wants to get kill! Horrible!"

Raymo added, "The police had no rights releasing where they are getting their leads from. To blatantly say the driver of the car that was behind is working with the is wrong."

This is the second time in days that the top cop has been under fire for releasing what observers refer to as 'sensitive information;. He was recently chastised by Deputy Premier Dr. Natalio Wheatley for releasing information pertaining to a national crime plan that was currently before the National Security Council for review.

Commissioner Matthews attracted criticisms when he responded to Deputy Speaker of the House of Assembly and At Large Representative Hon. Neville Smith calls for a national plan on how the Royal Virgin Islands Police Force (RVIPF) intends to deal with the rising crime.
#Facebook
Add Comment