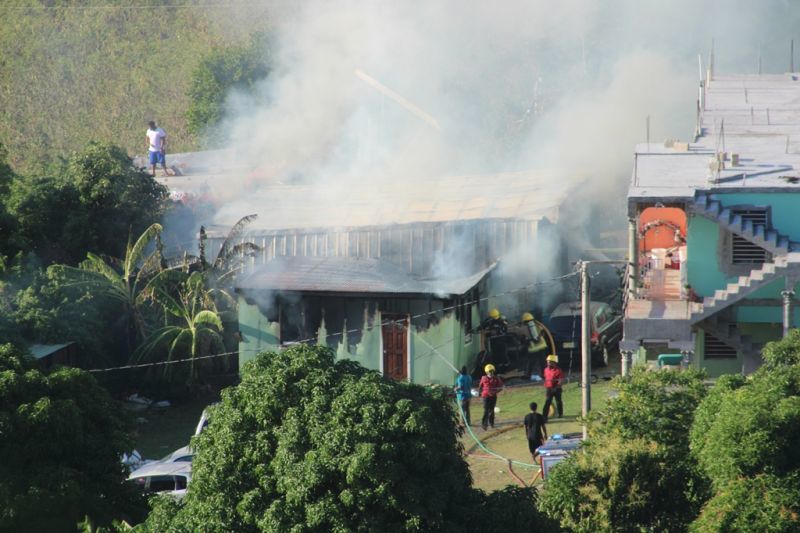 Bail has been denied for Virgin Islander, 30-year-old Alexander Jarvis aka 'Bope', for his alleged involvement in the fire that destroyed an auto repair garage and a dwelling home at Towers, on the main island of Tortola, on January 19, 2022.

The two complainants in this matter are Godfrey Gabriel who resides in Pockwood Pond and owns the garage and the second, Kareem Hall, who resided in the dwelling home that stood about three feet from the garage.

Jarvis, the accused, appeared virtually before Magistrate Khadeen Palmer on Wednesday, January 26, 2022 for his arraignment hearing.

The two counts of arson charges were only read for his information because the matter is indictable and will be dealt with at the high court before a judge and jury.

According to the court earlier this month, there was a verbal altercation between the accused and the garage owner, when the accused promised to “burn down the place” since Mr Gabriel was acting like a bad man.

On the day in question at about 3.30 pm, Mr Gabriel (VC) was working in his garage, the same compound where the accused resides.

The accused allegedly entered his residence and came outside with a towel in his hand and accused the VC of using his towel. The VC was adamant that he did not use the said towel; however, the accused allegedly shouted at him, “You taking me for a joke, I’m going to burn down your place.”

The accused then entered a part of the residence and he later emerged with a red gas bottle in his hand and began sprinkling liquid from the bottle on the garage and then used matches to start a fire.

Seeing the fire, the VC who was close by, doused the freshly-lit fire with water from a nearby drum.

The VC then removed some vehicles belonging to customers and he went to the West End Police Station to make a complaint. He was then informed via telephone that his garage was on fire.

When the VC returned he met his garage on fire. He then rushed inside to remove a cylinder of gas but was unable to salvage anything else.

Crown Counsel Kael London said the VC, Mr Gabriel, described his loss to be “substantial in the tune of tens of thousands of dollars.”

A person in the area reportedly saw when Jarvis lit the match and set the garage on fire, Mr London told the court.

Jarvis was later met and interviewed by officers of the West End Police Station and he denied the allegations about starting the fire or having an altercation with the complainant.

When he was charged he made no reply.

At the time of the fire, the accused’s father who is blind and an amputee suffering from diabetes was in the house and had to be rushed out due to the smoke.

The magistrate denied Jarvis bail despite his attorney Mrs Valerie Gordon arguing passionately that her client would be at risk if he is placed on remand at Her Majesty’s Prison, due to the COVID-19 outbreak there.

The magistrate said due to the strength of the Prosecution’s case and the seriousness of the offence, the accused is likely to abscond despite having ties here because he faces up to life in prison if found guilty.

“This time I will not make a bail offer,” she said, adding that Jarvis could also apply for bail at the Supreme Court.

She also ordered a mental health evaluation, as requested by Jarvis' father.

The matter was adjourned to February 24, 2022, for report, including a mental health report.