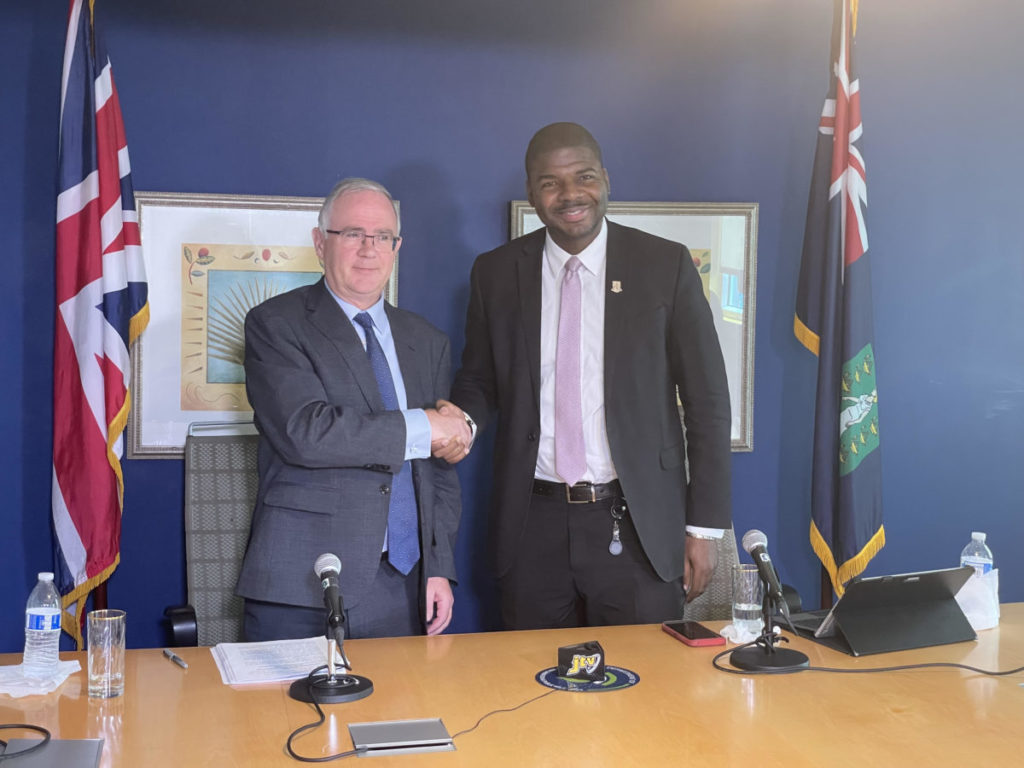 Governor John Rankin has just announced that the United Kingdom (UK) has decided not to impose a partial suspension of the BVI’s constitution and has accepted the National Unity Government’s proposal on how to implement the other recommendations outlined in the Commission of Inquiry (COI) report.

This means the BVI’s elected officials have been given the opportunity to continue governing through the House of Assembly without Britain imposing direct rule over the territory.

Since the publication of the COI report, Governor Rankin and the UK government has been having talks with Premier Dr Natalio Wheatley and his administration. And according to Rankin, all parties agreed that a fundamental shift in governance in the BVI is required.

As such such, he said the focus of the aforesaid talks rested on whether the Government of National Unity should lead the reforms or an interim Governor-led administration should be established.

“Last week, following discussions, the Government of National Unity submitted a final proposal to the UK Government outlining, with clear timelines, how they will deliver the COI recommendations but without the need for a temporary partial suspension of the Constitution,” Rankin said.

“I can inform you this morning that UK Ministers have agreed to the proposal submitted by the Government of National Unity. The Premier and Government of National Unity have shown the will and commitment to improve governance in the BVI and therefore it is right that elected officials here should have the opportunity to implement the COI recommendations,” the Governor continued.

Rankin said he was pleased the Government of National Unity has made its firm commitment to carry out far-reaching reforms, including going beyond the COI report, to fix the failings of governance and he welcomed the detailed plan the government has set out to implement the COI recommendations.

“I also recognise that the Premier has demonstrated his commitment by making a number of changes already. Many more difficult decisions will be required to make the deep and systemic changes necessary to improve governance in the BVI and much hard work will be required,” the Governor said.

Though the UK has opted not to do a temporary takeover, Governor Rankin said accepting the BVI government’s proposals came with certain conditions.

“I and the UK government want the Government of National Unity to succeed in making these changes and delivering the COI recommendations. But the UK government has a responsibility to the people of the BVI to make sure that happens. To ensure these commitments are kept, the proposal therefore contains several conditions surrounding implementation,” he added.

Governor Rankin said the proposal contains a set of strict delivery milestones that must be adhered to. These include regular public updates with each government ministry and their departments providing monthly delivery reports.

“I will formally assess progress every three months before sending a quarterly update to the Foreign Secretary. This will continue throughout the full period of COI implementation, which is estimated to be two years,” Rankin said.

“If the Government of National Unity, or any subsequent government, fails to deliver any of the milestones without reasonable justification, or I assess that progress is being frustrated in any way, the UK Government and I will take action to protect the interests of the people of the BVI,” he added.

The actions include continuing the option of temporarily suspending the House of Assembly and Cabinet, with a temporary Governor-led Interim Administration assisted by an Advisory Council, to drive forward the implementation of any outstanding recommendations.

“The UK government has put in place the framework to do this through an Order in Council. This is the procedural order put before the Privy Council of the UK which is required to make changes to the Constitution of the BVI. This will allow the Foreign Secretary to swiftly provide me with the powers needed to take corrective action if progress against the milestones is unsatisfactory,” Rankin said.

“If the government of the BVI delivers on the commitments and promises they have made, then the Order in Council will be kept in reserve and will not need to be used. In the meantime, I will continue to work constructively in partnership with the Premier and his Government in what I believe is a fair and balanced approach,” the Governor continued.

The Governor said he welcomed the Premier’s commitment to take the measures needed to implement change. He also thanked the people of the territory for their calm and measured response during recent turbulent and challenging times.

“I know that most people of the BVI are honest, hard-working, and caring. The reputation of the British Virgin Islands sits on the shoulders of these individuals, and not on the small minority who wish to profit at their expense,” Governor Rankin said.