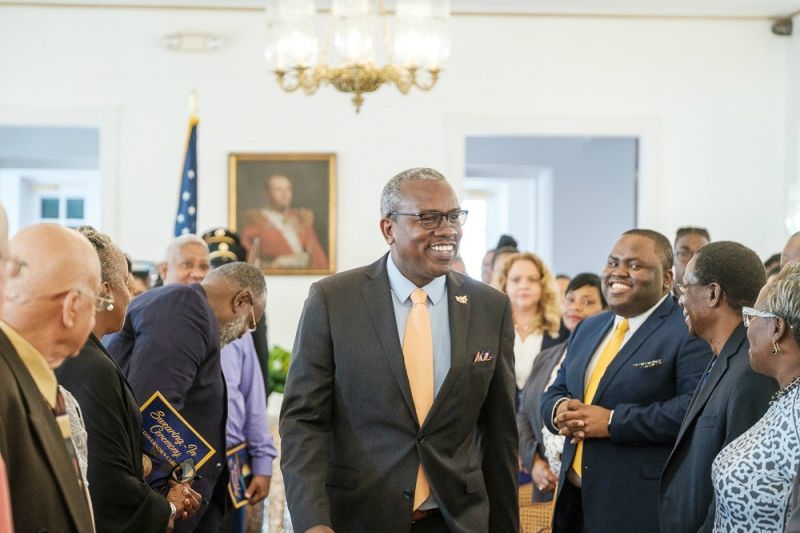 A casual conversation between Governor Albert A. Bryan Jr and Premier of the [British] Virgin Islands Dr the Honourable Natalio D. Wheatley (R7) regarding the upcoming US Virgin Islands (USVI) elections made for an awkward start to a press event on the Ninth Inter-Virgin Islands Council Meeting.

Both men and their territories' counterparts were waiting for the virtual press briefing to begin on Thursday afternoon while engaging in light conversation about the gubernatorial race scheduled for November 8, 2022. They were not, however, aware that their mics were hot.

“I don’t know why it should be a hard election, if we lose, it ain’t for trying,” Governor Bryan remarked, as others are heard chuckling at the statement, with one person commenting, “You know you got that in the bag."

The conversation not meant for public ears

In the almost two-minute-long conversation, Mr Bryan admitted that he thought his biggest competitor was Senator Kurt A. Vialet, who along with Senator Janelle K. Sarauw are running as candidates for the gubernatorial seats.

Mr Bryan said of the three other pairs running against him and Lieutenant Governor Tregenza A. Roach, Vialet and Sarauw were the only two who stood a chance.

“Only one?” a voice questioned, to which the governor responded, “The other two - the other dude is a felon,” he said referring to candidate, Ronald Pickard who had been convicted, along with two other police officers in 2001 of violating the civil rights of over a dozen people while serving as police officers on St Croix. Mr Pickard was sentenced to nine years and nine months in prison after a jury found him guilty on seven counts including assault with a deadly weapon, brandishing a handgun, civil rights violations and oppression.

“No, seriously, he’s been to jail for kidnapping. He was police, he kidnapped this stripper and went to jail and then the other guy, he does just run every year for the hell of it, you know,” Mr. Bryan continued.

Mr Bryan continued on to say that he didn’t think that Mr Vialet and Ms Sarauw were anywhere near winning in St Thomas, remarking “they ain’t even in the arena” but said that the race on St. Croix should be closer.

The men were continuing to speak about the St Croix vote when they were seemingly made aware that the mics were on and recording their conversation. The original recording was subsequently removed from the USVI Government House Facebook Page.

In the audio, Mr Bryan also said that his team had a plan with everything that the people wanted, a lot of which “should have happened already” but was not possible due to the Covid-19 pandemic and other delays.

“But is a landslide of shit happening. The timing work out!”