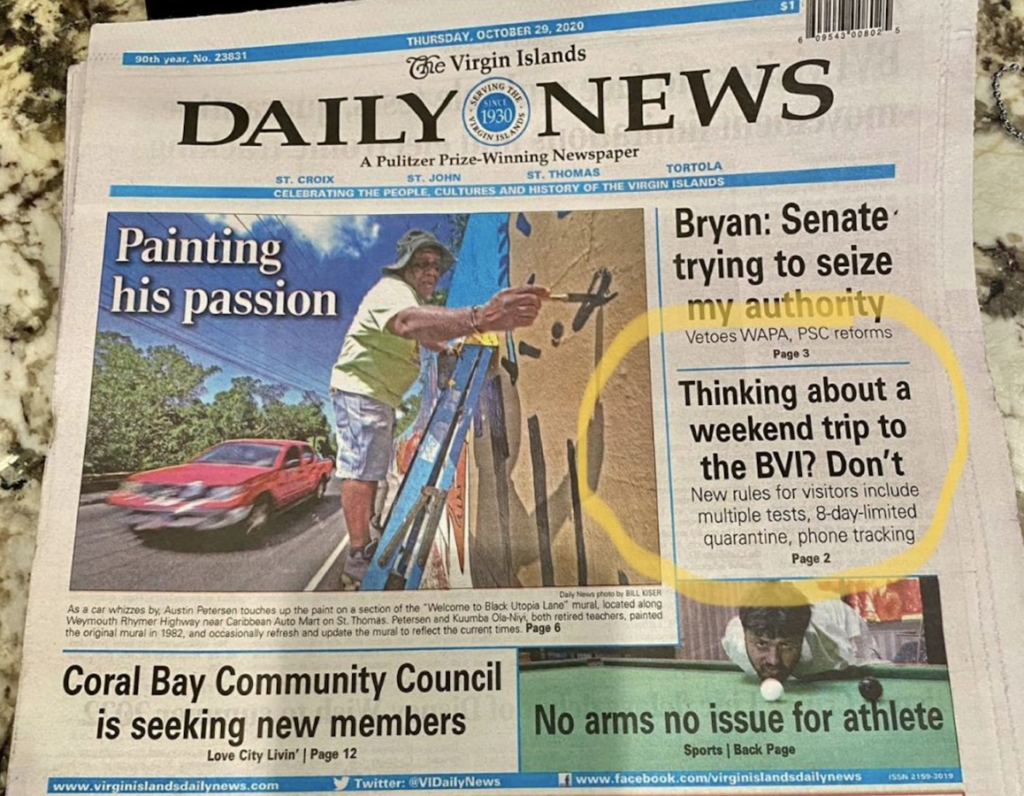 A headline in the USVI-based newspaper, Virgin Islands Daily News which seemingly criticises the BVI’s new COVID-19 protocols for the tourism industry has been making its rounds on social media.
The headline published on October 29, 2020 reads: “Thinking about a weekend trip to the BVI? Don’t.” It appears on the front page of the Daily News publication, a widely circulated print outlet in the USVI.

Our newsroom hasn’t yet ascertained the full contents of the article but Health Minister Carvin Malone has responded to the headline saying the newspaper has a right to “print stories as they see it without interference”.

Minister Malone, however, defended the BVI’s reopening protocols, saying the territory must open in a responsible manner.

“Businesses in BVI must reopen without being forced to close again like they are doing both regionally and globally. We are working with our health experts to find the right mix of protocols. We cannot make these up on our own. The eighth-day test is being reviewed by the health experts, not the politicians. The four days quarantine is a MUST if we are to be responsible at any level,” the minister said in a message sent to a local Whatsapp chat group.

He continued: “The world is spiking! This is a reality, not a scare tactic. Numerous jurisdictions are closing while we are seeking to open in a responsible manner. Let us all work together and do our part.”

On Facebook, the headline has angered many BVI-islanders who say it reflects badly on the USVI.

The critics say such a headline should never have been published by a USVI entity, seeing that territory has an economy similar to the BVI and since both territories have a good diplomatic relationship.

The BVI’s COVID-19 protocols which were announced earlier this week have not been accepted by many residents who believe they are too stringent and will deter visitors from visiting the territory when it reopens on December 1.

Some businesses reported a high number of cancellations from would-be tourists immediately after the protocols were announced.
#COVID-19  #Covid  #Facebook
Add Comment