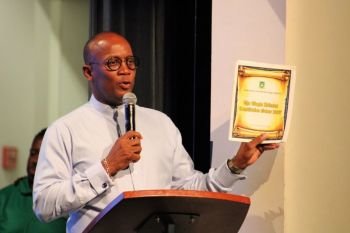 VI must be completely independent by August 1, 2027 - Skelton-Cline

Pastor and social commentator, Mr Claude O. Skelton-Cline said by 2027, the Virgin Islands should be out of the cusps of the United Kingdom (UK) and on the path of self-determination.

"I am a strong advocate of an independent and self-determined path, I believe we ought to set a time, a date in place when we can achieve that," Skelton-Cline said on the Thursday, July 8, 2020, edition of his show, Honestly Speaking, on ZBVI 780 AM.

"I certainly have declared out there [that] by August 1st of 2027, I believe and I am working towards us becoming an independent country," he said.

Over the course of his popular radio show, the man of the cloth has been highly critical of the UK's relationship with the Territory, including calling for the removal of remnants from colonial rule, such as the Governor and that office.

Following the killing of George P. Floyd in the US, he had told his listening audience that the UK, through the Governor, had placed its knees on the collective necks of Virgin Islanders in a move of oppression.

"I hope that this is the last year, that we are celebrating what has been termed as Territory Day, and this government, in particular, will move to change the name of that celebration from Territory Day to Virgin Islands Day."

The Virgin Islands Government has expressed disappointment that the UK has failed to assist the VI in a more tangible way in its greatest time of need, including after the destructive hurricanes of 2017 and amidst the global coronavirus pandemic.
#Coronavirus
Add Comment