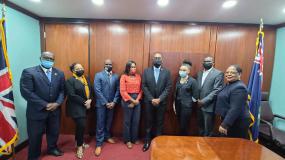 In a Government Information Services release, it was announced that the Virgin Islands Youth Parliament (VIYP) now has its full cohort of members following the administering of the Oath of Affirmation to three youth parliamentarians who were absent at the official launch in October.

Speaker of the House of Assembly Honourable Julian Willock said that under the revised structure of the Virgin Islands Youth Parliament, its members will have an opportunity to understand in theory and practice the important principles of governance.

He said, “I am very excited that the entire cohort has now been sworn in and now we are ready to go full steam ahead, for they are fired up and ready to go.”

The Oath of Affirmation was administered by the Clerk of the House, Ms. Phyllis Evans, paving the way for these additional designees to join their other fellow youth parliamentarians and to begin conducting sessions where they can debate topics recommended by the management committee of the VIYP where all the skills learnt in their training can be put on display.

The ceremony was witnessed by Speaker of the House of Assembly Honourable Julian Willock; Junior Minister for Trade and Economic Development and Territorial Member Honourable Shereen D. Flax-Charles and Minister for Transportation, Works and Untilities and Member for the 5th District Honourable Kye M. Rymer.