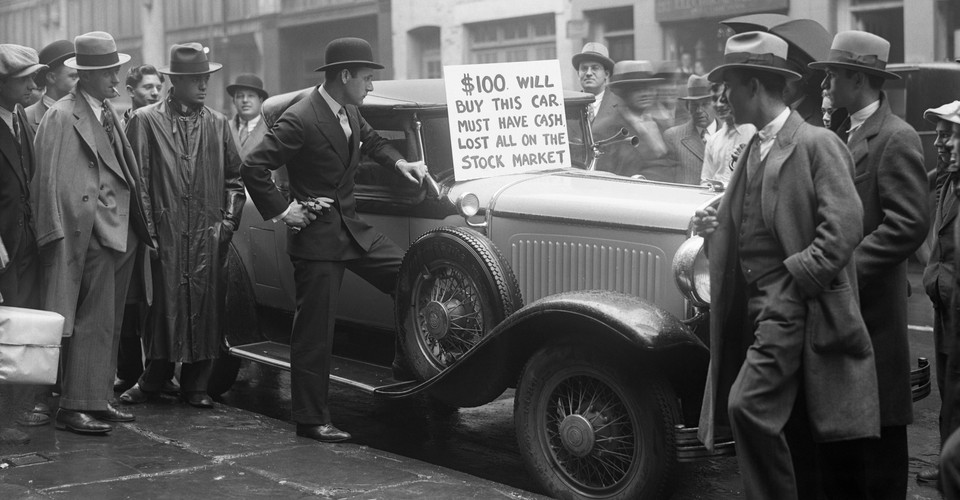 We Can’t Tell How Bad Things Really Are

Just as in 1929, a lack of accurate and timely data is exacting an enormous economic toll.
Stocks had been dropping nervously for weeks. Black Thursday-October 24, 1929-wasn’t as bad as the Black Monday or Black Tuesday that followed. And it wasn’t the beginning of the downturn that became the Great Crash. But something petrifying happened that day, around 10 a.m. Before that hour, prices were firm. Trading volume, though, was extremely heavy. So heavy that the stock ticker, which depended on the manual input of information and could print no more than 268 characters a minute, couldn’t keep up.

his had happened before. The average number of shares trading hands on the New York Stock Exchange had doubled and doubled again over the previous decade. And for a year now, traffic jams periodically had overwhelmed the Trans-Lux ticker system. “The neck of the bottle through which the day’s story of the market must flow … has become too narrow,” Collier’s noted in 1928. “When the tape falls behind for ten minutes or half an hour the Exchange and its doings drop, as it were, behind a cloud. As a result the humble ticker-which everyone has taken for granted up to now-has suddenly become the big problem of the stock market.”

But these earlier holdups had happened in a rising market. So the experience was like a brief power outage. Unsettling, yes. A sign that something needed fixing. And a fix was expected soon, no later than 1930.

On that nervous Thursday, though, the outage came on a dark cliffside drive. Traders on the floor of the New York Stock Exchange-suddenly unsure of the value of their holdings-instinctively pulled back. The ticker fell 15 minutes behind. “Prices fell farther and faster, and the ticker lagged more and more,” John Kenneth Galbraith wrote in The Great Crash: 1929. “By eleven-thirty the market had surrendered to blind, relentless fear.” By then the lag was 48 minutes. At 1 p.m., the machine was quoting prices 92 minutes old-leaving people to their worst imaginings. When a workman was seen high on a building outside the exchange, a crowd assumed he was about to jump.

Inside the exchange, the panic was checked when the banker Thomas Whitney strode onto the floor and loudly purchased 10,000 shares of steel. Shares rebounded furiously in the afternoon-but, tragically, the lagging ticker failed to carry news of the recovery elsewhere. In Chicago, the Tribune reported, “thousands … threw themselves before the fire of brokers’ clerks demanding margins” based on information that, by day’s end, was four hours, eight-and-a-half minutes old.

If the tale of the lagging tape has a lesson, it’s that negative information gets crises rolling, but lack of information creates free-fall panic.

We’re living through this right now. In the absence of data, the calculative machinery in our prefrontal lobes has nothing to doirrational biases don’t even get a chance to weigh ininviting our older, animal brain to either freak out or fill the void with whatever junk it can find. Rumor. Invention. Tweets. Bats. Maybe a map showing 250 COVID-19 cases in the state. New cases, or total? Unclear. Out of how many tested? It doesn’t say. Incomplete information only adds to our sense of not knowing.

“Fear of the unknown (FOTU) will be defined herein as, ‘an individual’s propensity to experience fear caused by the perceived absence of information at any level of consciousness or point of processing,’” a paper by the Regina University psychologist Nicholas Carleton begins, which proposes that FOTU is not only a fear but the fear on which all the others rest. There’s certainly evidence to support the notion. People prefer a definite electric shock now to a possible one later, studies have shown. They’re more likely to choose medical treatments for which the odds of survival are at least known. And marketers prey on FOTU all the time. A comedian friend of mine once had a bit about shopping in the dairy aisle and spotting a bottle of “cow-dung free” milk.

The joke makes a serious point: Once we’re aware of things we don’t know, we start to wonder about things we might be unaware of not knowing. “In a void, no one could say why a thing once set in motion should stop anywhere; for why should it stop here rather than here?” Aristotle wrote 23 centuries ago (originating the phrase “Nature abhors a vacuum”). If the market is sliding faster than the ticker can record, why shouldn’t stock prices fall to zero? “How many other planes are in the sky?” we wondered in the morning hours of 9/11.

Those were moments of maximum uncertainty-which, hopefully, is where we are right now with the coronavirus. The delay in providing test kits has been our lagging stock ticker, leaving us unable to determine just how bad the outbreak really is. If and when tests are made available in number, health officials will not only have reliable counts of COVID-19 cases; they’ll have meaningful denominators by which to divide them. Governors can weigh the long-term health consequences of mass unemployment against the immediate costs of the coronavirus. Stocks will regain denominators in their price-to-earnings ratios. And society can begin to draw a line under the crisis.

That’s what never happened in 1929. “The singular feature of the great crash of 1929 was that the worst continued to worsen,” Galbraith wrote in his classic account. Black Monday, the 28th: “Once again a late ticker left everyone in ignorance of what was happening, save that it was bad.” Black Tuesday, the 29th: “Once again, of course, the ticker lagged,” prices fell vertically, and the last chance for organized retreat was gone.

The story of the lagging ticker has been lost to our collective memory. The University of Washington professor Joseph Janes speculates it’s because the history was written by economists, who tended to seek economic causes: lax monetary policy, excessive purchases on margin, and the like. Janes is an information scientist, and so assembled a podcast on the ticker as “the second domino” in the crash.

“There is a chunk of this, as in 1929, that is very explicitly an information problem,” he told me the other day from his home in King County, Washington (one of the first jurisdictions to lock down during the pandemic). “Some of it is understandable because this is an emerging virus. But when I hear officials say ‘We don’t know,’ that tells me they don’t know the denominator of the statistics they’re citing. And without knowing these critical pieces of information, we’re operating in the dark.”
#COVID-19  #Covid  #Coronavirus
Add Comment