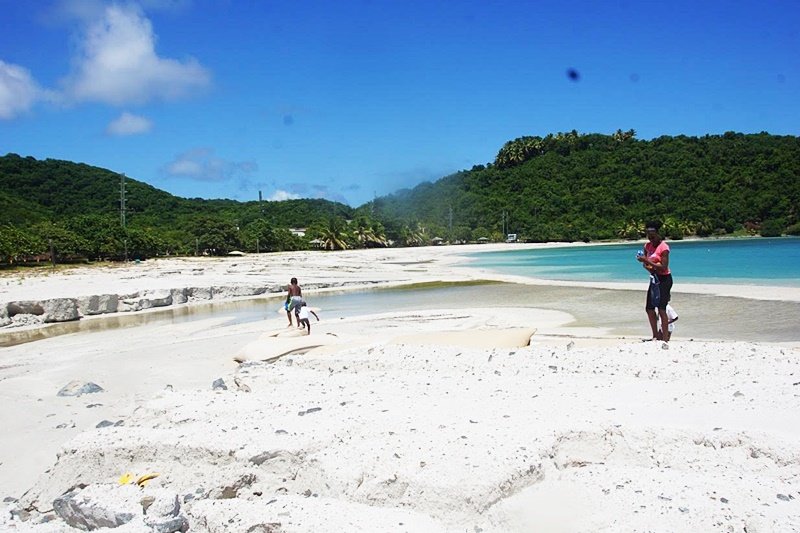 ‘We don’t feel safe at some local beaches’. WE residents back the need for beach policy in BVI

Members of the West End community voiced their concerns on the current state of beaches in the British Virgin Islands and various beach activities that are harming the environment.

Those sentiments were expressed at a community meeting held at the Lenora Delville Primary School on October 7 to discuss the government’s proposed beach policy.

During the meeting, President of the North Side Beautification Committee Daphne Soutt fielded a number of questions and suggestions to Minister of Natural Resources, Vincent Wheatley.

Fear on beaches in BVI

She said that the sense of security on local beaches is now a thing of the past as beachgoers now have a major fear of being attacked by an animal or being asked to vacate a beach.

“Sometimes you’re in the beach and you see the dogs and you’re scared because you don’t know if the dog is going to come and attack you or come for your children,” Stoutt said.

Noting instances when persons were asked to leave certain beaches by property owners, Stoutt questioned whether persons can go to any local beach as they please.

In response, Minister Wheatley said no one can legally prevent anyone else from visiting any beach in the BVI.

“All beaches are public but we still have to be mindful that we are a popular tourist destination. The policy tries to address this and create that balance where investors feel comfortable having you on the beach and we feel comfortable using the beach.”

Stoutt also addressed the need for something to be done about the amount of garbage which is seen on some beaches.

She believes a system should be put in place for vendors who fail to properly dispose of their waste.

“When people apply for a permit to go on the beach, they should leave a deposit and somebody needs to go and inspect that beach when they’re finished. If the beach is in the condition that you get it, you would get your deposit back,” Stoutt said.

Limited space to swim on some beaches

The West End resident raised a concern about the availability of space for persons to swim at some beaches. She said space has become an issue because of watercraft that dock too close to the shorelines.

“If you go to Jost Van Dyke on a Sunday you can scarcely get into the sea because of the boats. There should be a line where the boats have to stay beyond. It’s too much. It is really too much,” she said.

Vending permits on beaches to be assessed

She also questioned the Deputy Premier on how many permits are being issued for vending on the beach at Smuggler’s Cove in West End.

She said: “We were at Smuggler’s Cove planting one day and the next day there was a beach bar put up. They broke and damaged all the trees we put in and they leave the garbage on the beach.”

Meanwhile, another West End resident Dyllan Penn agreed with the suggestion by the minister to get all the beaches properly organised and defined. He said once each beach is properly defined, it will effectively allow the Town & Country Planning Department to be better able to determine the type of permits which are issued to a vendor for a particular beach.

Following the meeting, Minister Wheatley said once all the information from public consultations is collated and assessed, a revised policy will be brought back to the public within the next two months.