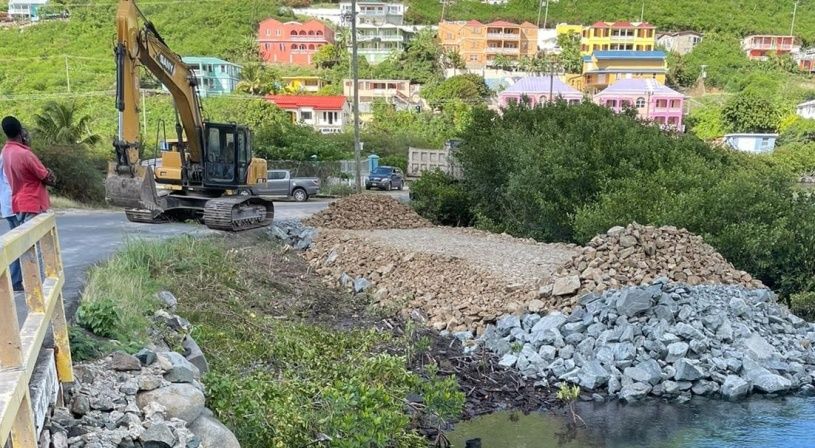 We Promised And We Are Doing It

Preliminary works commenced on the long-promised new bridge at Frenchman's Cay yesterday, February 23.
"The public has been advised that works to initiate the construction of a bypass road to allow residents and businesses to access Frenchman’s Cay have begun. Commuters are therefore asked to adhere to all traffic signs and proceed with caution. Works to replace the bridge will commence in March after the bypass road is complete. Any inconvenience caused is regretted," a statement from Government indicated.

Premier and Minister of Finance, Hon. Andrew Fahie took to social media to underscore that the Government is delivering on yet another project which has been in the works for several years.

"The new Frenchman's Cay Bridge has been too long overdue. Your Government promised that we would build the new bridge and we are doing it, just as we have promised to deal with so many long outstanding problems that have been affecting our people for years," Premier Fahie stated.

“I want to deal with things straight up,” the Premier stated on Tuesday, February 8, during the Virgin Islands Party (VIP) Let’s Talk radio show.

He added, “I heard a radio show carelessly said say that the contractor that is building the Frenchman’s Cay bridge for $300,000 is building the Premier’s home and they just left it out there.”

Quality Construction operated by Roy Garroway, known as ‘Yellow’, was awarded the bridge contract for $315,753.

“I am here to say that an independent process was used for the bidding process for the bridge in Frenchman’s Cay; nothing to do with any elected official. It went through a tender process, a bidding process. The contractor won that without any input of political interference,” Premier Fahie stated.

The Premier said it was quite irresponsible, but it is the season when you will see people try to distort your character and reputation.

As for his home, the Premier stated that he has a contract with the bank and the contractor with regards to how the drawdown is being made.