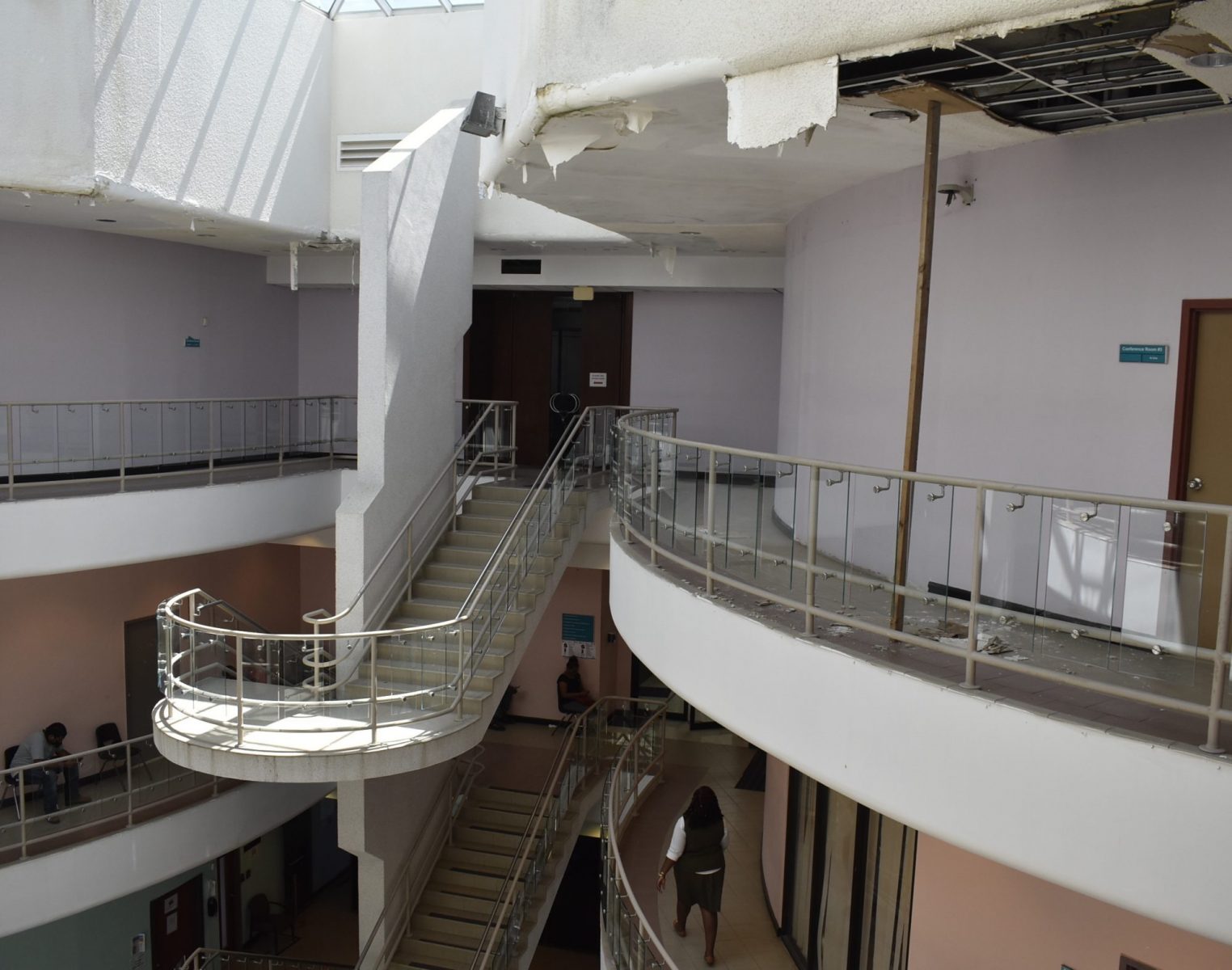 As repairs on the Ralph T. O’Neal Administration Complex continue, much of the western atrium has been demolished while contractors focus on ensuring the building is watertight, and tender documents have been issued for new parking areas, a better drainage system, and the replacement of the exterior metal doors on the eastern side of the complex, according to Transportation, Works and Utilities Minister Kye Rymer.

Although the demolition of the building’s western atrium has been halted to allow for the temporary relocation of employees in the Inland Revenue and Treasury departments, most of the other office space in this section has been demolished, Mr. Rymer told the House of Assembly on March 10.

Demolition will resume once all employees have been relocated, the minister explained, though he did not provide a date for the move.

Progress also has been made on the effort to make the complex watertight, according to Mr. Rymer.

The company Professional Roofing has installed a water-resistant membrane on the complex’s roof; Wallan Glass Suppliers has replaced the building’s skylights; and DesignBVI Limited has been contracted to replace all the exterior glass windows and doors, he explained.

“Once DesignBVI Limited has completed this component of the project, we will see a significant transformation to the exterior of the building,” Mr. Rymer said, without specifying when DesignBVI will begin its work or how long it is expected to last.

The ministry is also working with OBMI Limited to finalise designs to repair the building’s exterior cladding — a protective layer shielding the exterior from the elements — which has been gashed and damaged in several areas, Mr. Rymer added.

He expects to issue a tender by the second quarter for this year of the “repair and reinstallation of the stucco,” he added. “The current focus of my ministry along with OBMI is to finalise the exterior works to ensure the building is fully watertight and resilient before engaging the interior components of the works,” Mr. Rymer said.

Mr. Rymer’s ministry also has published tender documents for other projects, including the construction of a basement parking facility in the west atrium; the replacement of the exterior metal doors on the east atrium; and improved drainage in both east and west atriums, he said. “This tender will go towards increased drainage within the compound, water infiltration prevention and enhancing the services of the administration complex,” Mr. Rymer said.

Many of the recently completed projects had been in the works for more than a year.

During an HOA meeting in February 2020, Mr. Rymer said that Professional Roofing was 98 percent finished with the installation of the waterproof membrane, that leases had been signed for temporary office space, and that relocations would soon commence.

At the time, the minister also said that the first batch of metal frames for the new skylight was due to arrive in the territory shortly after his speech, and Wallan Glass was set to begin installation shortly after its arrival.

Then, on May 15, 2020, Mr. Rymer announced in the HOA the nearly $1,050,000 contract with OBMI Limited “to provide architectural and engineering designs, construction supervision and construction management,” which he said “marks the official commencement of the renovation and repairs works” to the complex.

However, this announcement came more than a year after a contract was initially inked with the firm, Mr. Rymer added.

The original contract was for more than $2.7 million, but through “continued discussions,” the parties agreed to a substantial reduction, resulting in a savings of about $1.6 million, the minister explained.

At that same meeting, Mr. Rymer said that Professional Roofing’s repairs were “substantially complete” and the replacement of the skylights through Wallan Glass Suppliers was approximately 50 percent completed.