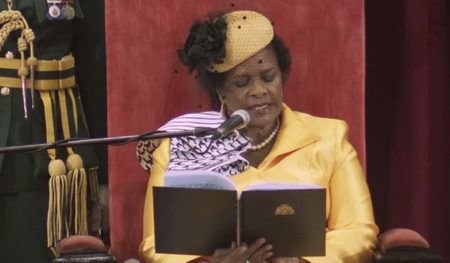 Governor-General Dame Sandra Mason, gave the update on SEptember 15, 2020, at the opening of a new parliamentary session in Bridgetown.

She invoked the famous quote of the nation’s first prime minister, Errol Barrow, who had cautioned against ‘loitering on colonial premises”.

“Having attained independence over half a century ago, our country can be in no doubt about its capacity for self-governance,” said Queen ELizabeth’s representative, whose role is mostly ceremonial.

“The time has come to fully leave our colonial past behind. Barbadians want a Barbadian Head of State. This is the ultimate statement of confidence in who we are and what we are capable of achieving,” she said.

Dame Sandra said the administration of Prime Minister Mia Mottley, will take the “next logical step” to make Barbados into a republic in time for the country’s 55th anniversary of independence in November 2021.

The governor general is duty-bound to deliver the speech prepared by the political administration.

In 1998, a Barbados constitutional review commission recommended republican status and in 2015, then Prime Minister, Freundel Stuart said his administration would have implemented the recommendation.

Most Caribbean Community (CARICOM) states maintained formal links with the British monarchy after gaining their independence.

If Barbados goes through with its plans, it will join Trinidad and Tobago and Guyana as members of CARICOM’s ‘Big Four’ to sever ties with the monarchy.

Various administrations of Jamaica, the fourth member, have repeatedly said they would make Jamaica into a republic but no steps have been taken do so.

Prime Minister Andrew Holness, who was last week sworn in for a second consecutive term, had committed to putting the issue, along with other major constitutional reform proposals, to citizens in a ‘grand referendum.’

The Queen is Head of State for nine CARICOM member states: