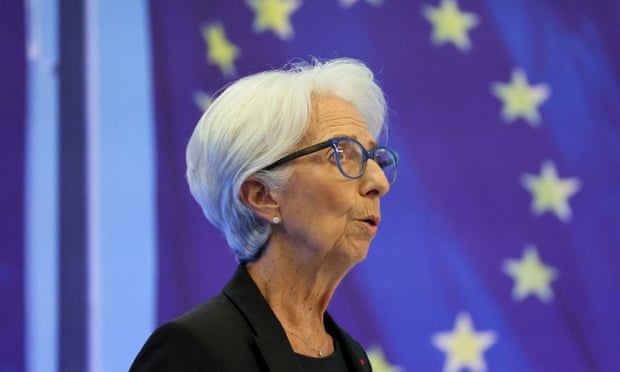 Increasing interest rates in Europe could push up the UK’s Brexit divorce bill by £5bn, the government’s Treasury office has said.

Simon Clarke, the chief secretary to the Treasury, made clear in a written statement that rising interest rates affecting EU pension obligations were the driving force behind the new divorce bill estimates.

The Brexit divorce bill includes the working out of long-term guarantees on certain lending and spending by EU institutions while the UK was still a member of the bloc.

Originally the government estimated the bill covering spending commitments would be between £35bn and £39bn. This included loans guaranteed by the European Investment Bank for infrastructure and other projects signed off during the UK’s membership.

No finite settlement was agreed as the bill takes account of performance of loans. The Treasury’s latest estimate put the figure at £42.5bn, up from £37.3bn a year ago.

In a written ministerial statement, Clarke said the rise was primarily down to the UK’s obligations for EU pensions.

“The primary drivers are the latest discount rates and inflation assumptions, which are centrally set by the government for valuing long-term liabilities,” he added. “However, given this is a multi-decade liability, the variables used in this forecast will continue to fluctuate up and down.”

Up until the end of last year, the UK says it has paid £5.8bn to the EU as part of the agreement.

A Treasury spokesperson added: “The unprecedented recent rise in inflation and changes in discount rates have increased our pensions liability, which is the biggest reason for the increased estimate.

“The true cost of the settlement is confirmed when payments are made, based on the value at the time. The Treasury continues to monitor and verify these payments in line with the negotiated agreement.”

The European Commission had calculated the divorce bill higher than the UK had at £41bn, at the time of the three-party withdrawal agreement which also included pacts on Northern Ireland and EU citizens’ rights.

The shadow of the withdrawal agreement continues to be cast on EU-UK relations with prime ministerial hopeful Liz Truss threatening to tear up the Brexit trade arrangements for Northern Ireland.

In turn the EU has delayed ratification of the UK’s associate membership of the flagship £80bn Horizon Europe science research programme, causing the loss of funding for some academic projects already greenlit by the European Research Council.

On Thursday 24 groups including the Royal Society, the Russell Group of universities and Cancer Research UK called on the two candidates battling to become the UK’s prime minister, Truss and Rishi Sunak, to commit to keeping the UK’s leading place in research, development and innovation (RDI).

In a letter to the candidates, they urged them to make membership of Horizon Europe a priority and to commit to spending 3% of GDP on RDI.