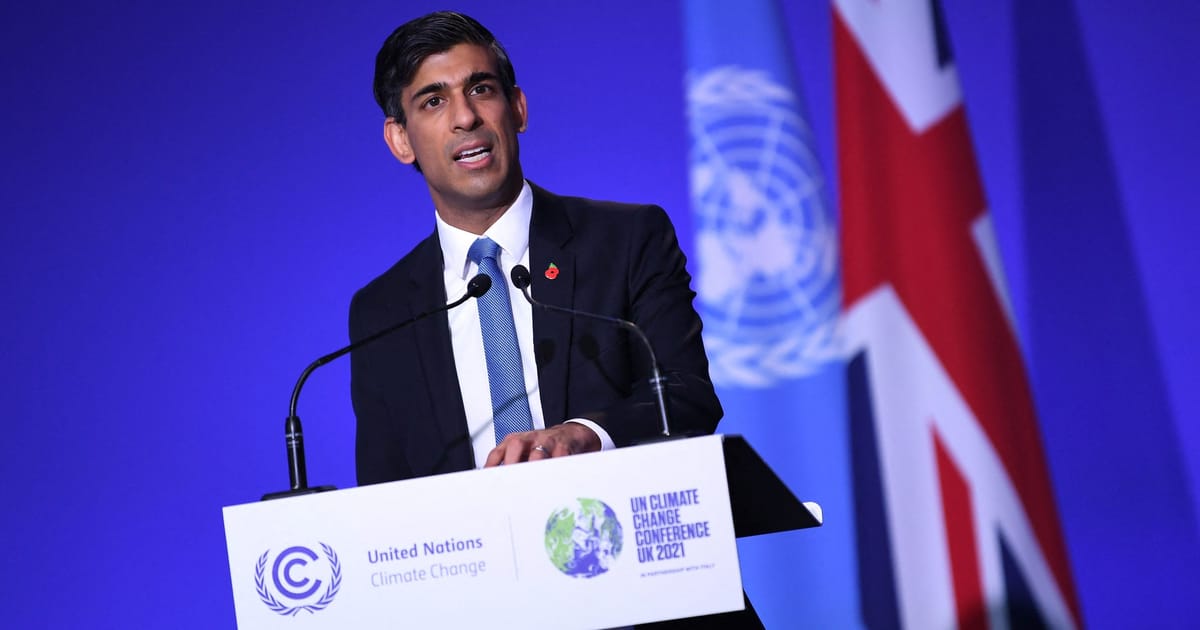 UK fails to pay climate finance funds on time, as new prime minister takes over amid turmoil in London.

Britain has failed to pay out more than $300 million it promised to two key climate funds, leaving it facing further international embarrassment in the final days of its stint as the world's official climate action leader.

The missing payments, which were pledged to help poor countries cope with climate change, raised eyebrows in Egypt, which takes over the presidency of U.N. climate talks from the U.K. when the COP27 summit opens on November 6.

“We know that everybody is facing challenges when it comes to finance, but at least deliver on what was pledged,” said Mohamed Nasr, a senior Egyptian diplomat. “And the expectation is that you will have another round of pledges” at COP27.

Britain's new Prime Minister Rishi Sunak won’t attend the next edition of the U.N. climate talks in Sharm El-Sheikh, focusing on “pressing domestic commitments” instead. Sunak's office indicated on Monday that he could change his mind, with no final decision having been made.

“Is it essentially squandering that huge investment in U.K. soft power by not following it up?” asked Nick Mabey, the head of the E3G think tank and an independent adviser to the COP26 presidency. "Sunak's number one job is rebuilding U.K. reputation in the world, because we are a laughing stock … The climate is probably the most high-profile role we have. So it's a bad move, not going to COP."

Sunak’s predecessor-but-one Boris Johnson apparently agrees. The Observer reported over the weekend that he planned to go to Egypt. It could be argued that Johnson sees COP26 as a key part of his prime ministerial legacy — albeit one he failed to mention in his valedictory speech on leaving office. It would also draw a strong distinction between his priorities and Sunak’s.

The stay-at-home leader joins King Charles on the bench, after the climate-conscious monarch was reportedly told not to go by Sunak’s predecessor Liz Truss. (She, to complete the circle, was going to attend, before she quit.) Then on Friday, Environment Secretary Thérèse Coffey said the king's attendance was "up to him," only for the prime minister's office to say, finally, that the king was definitely not going to Egypt.

Sharma told the Sunday Times he was “pretty disappointed” by Sunak’s decision. “I think it does send a signal — if the prime minister was to go — about our renewed commitment on this issue,” he said.

The COP26 climate talks in Scotland last year were billed as a coming out party for post-Brexit Global Britain and the conference was seen as a moderate success. It helped to rekindle support for efforts at the highest levels of international leadership. Back when Boris Johnson was prime minister, the U.K. set itself some of the world's toughest climate goals.

But Labour leader Keir Starmer said: "Britain showing up to work with world leaders is an opportunity to grasp. Not an event to shun." Shadow Climate Secretary Ed Miliband said it was a "massive failure of leadership."

In further bad news for Britain's COP26 legacy this past week, the U.N. delivered its scorecard on a U.K.-brokered deal, under which countries agreed to come up with improved climate plans before COP27.

Major emitters like China failed to heed the demand for new targets that would significantly lower global temperatures. Just 26, mostly small, countries have acquiesced, shaving a tiny fraction off projections for emissions in 2030.

The U.K.'s failure to make its climate finance payments will be acutely embarrassing for British diplomats preparing to head to Egypt.

The U.K. missed its September deadline for a promised $288 million to the Green Climate Fund (GCF), the fund confirmed to POLITICO. A $20.6 million pledge to the Adaptation Fund is also still to be paid.

Both funds provide cash for climate projects in the developing world. Board notes from a recent GCF meeting said three projects had been put on hold due to a “lower volume of contributions from contributors than was anticipated.”

Successive hits to the U.K. balance sheet have seen the country cut its overseas aid budget from 0.7 percent of GDP to 0.5 percent. The London government also diverted climate finance cash to buy weapons for Ukraine, a minister said in June.

A spokesperson for the U.K. Foreign, Commonwealth and Development Office did not confirm whether or not the missing pledges had been used for Ukraine. British officials plan to update the GCF board on the U.K.'s payment schedule as soon as possible.

The churn at the top level of government as successive ministers and prime ministers cycled through in recent weeks has made decision-making difficult. FCO officials held talks with the Treasury about the payments under previous administrations, another U.K. official said, but new ministers are now in post and the show must begin all over again.