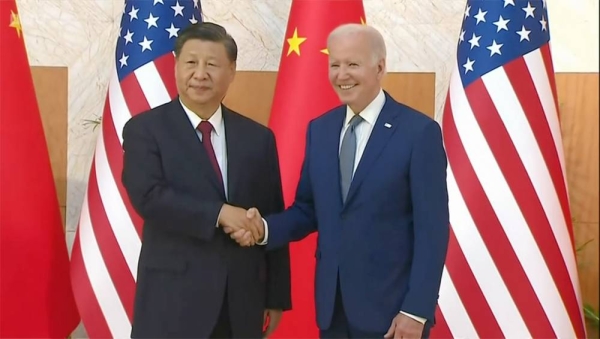 COP27: US, China agree to resume cooperation on climate issues

It’s day 9 of COP27 and we’re firmly in the second half of the UN climate conference. Negotiations are still slow but there was a glimmer of hope Wednesday as the US and China agreed to resume cooperation on climate issues.
Draft texts are also going around, giving clues to what might be in the final deal at the end of the week.

US President Joe Biden and Chinese leader Xi Jinping agreed to resume cooperation on climate change. It has offered a much needed boost to negotiations at COP27.

The two leaders of the world’s biggest carbon emitting countries met at the G20 summit in Indonesia. They indicated that they would “empower key senior officials” on areas of cooperation including climate change.

Heading into the last week of the UN climate conference, progress has been slow.

Spain’s climate minister Teresa Ribera said she was hopeful that the agreement would energize negotiations in Egypt. “The two biggest emitters need to be cooperative and ambitious,” she told Reuters.

On Tuesday, the world’s population reached 8 billion people. At the same time, the planet is getting hotter.

But experts say that the two aren’t as linked as you might think. The problem is consumption rather than overpopulation.

A small number of people are causing far more than their fair share of emissions.

Kenya, for example, has 55 million people — about 95 times more than the population of Wyoming in the United States. But Wyoming emits 3.7 times the amount of carbon dioxide as Kenya.

Africa as a whole has 16.7 percent of the world’s population but historically emits only three percent of global carbon pollution.

The United States, however, has 4.5 percent of the planet’s people but since 1959 has put out 21.5 percent of heat-trapping carbon dioxide, according to data from the Global Carbon Project.

“The question is not about population but rather about consumption patterns,” said climate scientist Bill Hare of Climate Analytics. “So it’s best to look at the major northern emitters to begin with.”

The European Union, meanwhile, has updated its climate pledges with plans to cut emissions by 57 percent by 2030.

“Don’t let anybody tell you, here or outside, that the EU is backtracking.”

The pledge is part of the ‘Fit for 55’ package which aims to make the bloc carbon neutral by the middle of the century.

Other measures include carbon sinks and increased investment in electric cars. As of 2035, all new cars in the EU will be required to be zero-emission — effectively banning petrol and diesel vehicles.

But campaigners insist that the EU could do more. CAN Europe analyzed whether existing pledges will keep us below the Paris Agreement target of 1.5 degrees Celsius of global warming.

It concluded that the EU emissions reduction target should be raised to 65 percent to avoid devastating temperature rises.

“The focus for many leaders is about making deals for fossil fuel lobbyists, surviving the next election cycle and grabbing as much short-term profit as possible,” Nakate said at an event on the sidelines of the UN climate talks.

She warned that COP27 was being infiltrated by oil and gas representatives who have turned it into “a sales and marketing conference for more pollution and more destruction.”

Last week they released an analysis that showed 636 oil and gas lobbyists were registered to attend COP27.

“Those perpetuating the world’s fossil fuel addiction should not be allowed through the doors of a climate conference.”

And, Tuesday night, Ukraine’s Environment Minister Ruslan Strilets spoke at a COP27 side event, where he laid out the environmental impact of Russia’s invasion.

Since the start of the war in February, Ukraine claims to have gathered evidence of more than 2,200 cases of environmental damage, costing a total of €37.8 billion. It is collecting evidence of environmental crimes with which to sue Russia and is launching a platform to evaluate damages caused by military action.

“The main challenge and we understand it, is that it will be very difficult for us to file (law)suits for every environmental damage,” Strilets said.

He also added that the war has directly led to 33 million tons of greenhouse gases being emitted. Rebuilding the country could cause a further 49 million tons of emissions.

“We call upon each and everyone to join the struggle of the life of human civilization. Not only Ukraine, but the whole world should demand responsibility from Russia.”
#Joe Biden
Add Comment