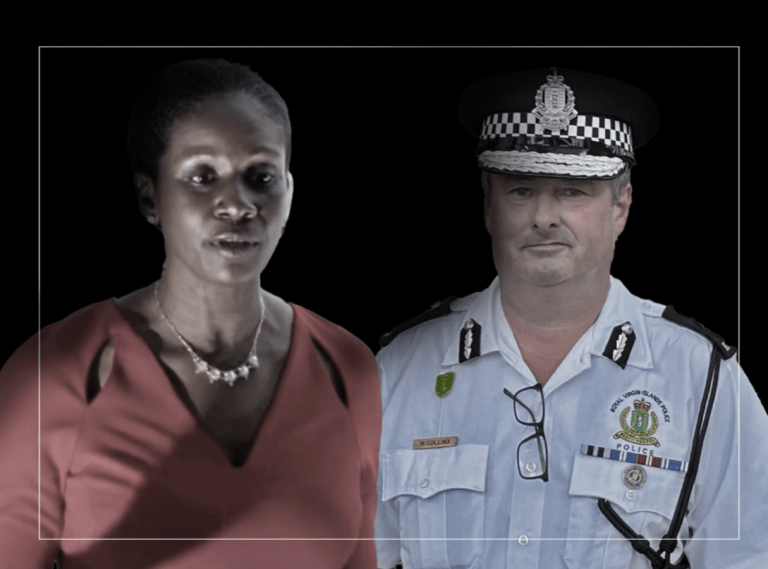 The public continues to debate the similarities between the actions of ‘rogue’ public officer Najan Christopher and Police Commissioner Mark Collins who recently faced backlash for approving a negative and graphically violent video about the BVI.
Christopher is the former Director of the International Affairs Secretariat who was recently arrested and charged after reportedly sending a diplomatic note to the United States (US) courts earlier this year, reportedly in an attempt to free disgraced former Premier, Andrew Fahie.

Some sections of the public have expressed that her arrest was unfair especially since Police Commissioner Collins faced no consequences for his alleged role in a viral video that portrayed the BVI as a crime-infested place.

But speaking at a press conference yesterday, Governor John Rankin stated that there is no suitable comparison between the actions of the two public officers.

“I’m not going to comment on the particular circumstances of Ms Christopher which you understand is now before the courts. But otherwise, I think the comparison you’ve made between the two is not an apt comparison,” Governor Rankin said in response to a question from a member of the media.

Governor Rankin said it should be noted that Commissioner Collins’ actions were examined and cleared by the National Security Council (NSC). He said the Commissioner apologised and the NSC determined that the senior cop’s actions were not malicious.

“The Council also acknowledged and agreed that the material and general content of the video was already in wide circulation in the public domain…There was absolutely no criminal offence committed by the Commissioner of Police — breach of trust or otherwise,” the Governor explained.

Najan Christopher was arrested and charged on October 10 for breach of trust by a public officer and false assumption of authority.

But some sections of the public say she was only doing her job when she dispatched the letter to assist former Premier Fahie.