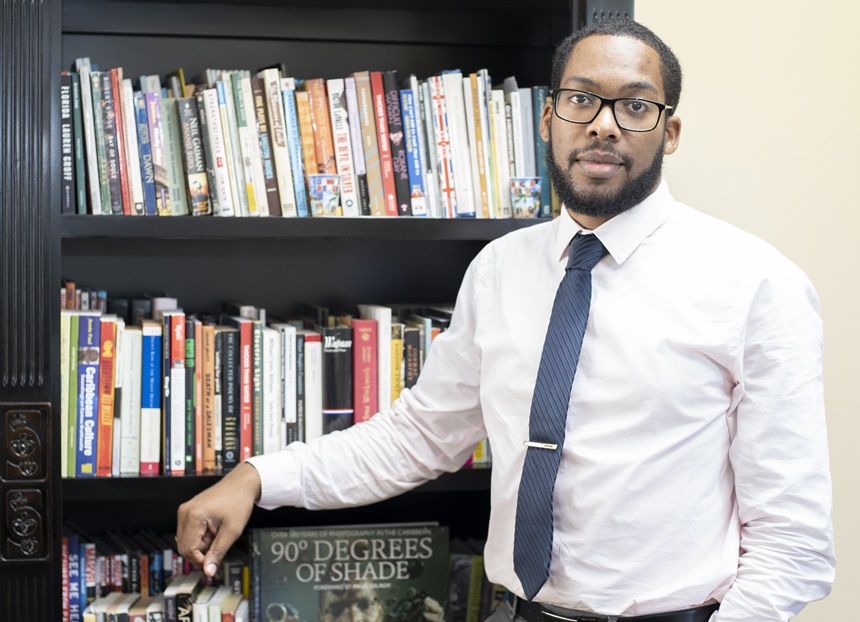 Local award-winning poet Dr Richard Georges has been appointed as the territory’s first ever Poet Laureate, a position which he promises to use to further develop literary arts in the British Virgin Islands (BVI).

This was revealed during a specially held ceremony on Friday to officially award Dr Georges the territory’s highest literary award.

Speaking during the ceremony, Dr Georges said: “While this is a great personal milestone, I believe what is more important is what portends for the undreamt future, that we are beginning to acknowledge the position and importance of the arts in the development of the society. It must be stated that the role of a poet laureate is not a symbolic one, that it questions not so much the merit of the individual who receives the award, but more so their capability in fulfilling the functions that are before them.”

He added: “Without attempting to answer that question I can only pledge my fidelity to the territory and my dedication to doing all that I can to develop poets and promote poetry within our borders.”

Dr Georges, who is also the President of the H Lavity Stoutt Community College, urged the government and the Department of Culture to continue to put the necessary mechanisms in place to propel literary arts in the BVI.

He also briefly outlined some of the goals he intends to achieve during his three-year tenure.

“I also admonish you to continue to develop and invest in artists through commissions of art, literature, murals, statues. To work towards the creation of a national museum and gallery, with significant art work to be exhibited to residents and tourists and to encourage and facilitate the production of plays and films to be performed and screened right here in this auditorium,” Dr Georges stated.

“I pledge to conduct and facilitate workshops for residents in poetry, fiction and nonfiction, by collaborating with notable writers throughout the Caribbean diaspora. I will work towards establishing publication opportunities for emerging BVI writers, both with Moko, the online magazine for Caribbean art and literature, as well as other journals and magazines,” he explained.

Much more than just an accomplishment

Meanwhile, Minister for Education & Culture, Dr Natalio Wheatley said the award is a recognition of the central role that culture plays in shaping the identity and the destiny of the BVI people.

He said it is fitting Dr Georges, who is an internationally acclaimed poet, is the first recipient of the award after significantly contributing to literary arts in the territory for. years.

“In the Virgin Islands we are not yet aware of the adulation that is pouring out across the globe for the work of Richard Georges. I sat in a conference in St. Croix where students from the United States and across the Caribbean were discussing, studying and writing about Dr. Georges work and so the saying goes, a king has no honour in his own home,” the Education Minister stated.

“Dr Georges work is being published by international presses, his first two books of poetry was shortlisted for prestigious international awards and with his third book, ‘Epiphaneia’, he won the most prestigious literary award by a Virgin Islander, the Bocas prize, beating literary legend and the author of one of my favourite books ‘Breath, Eyes, Memory’ Edwidge Danticat,” he added.