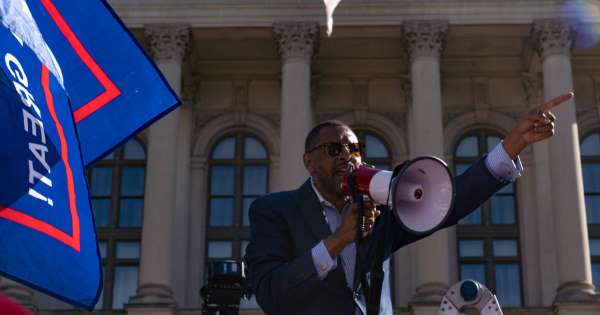 Georgia state Representative Vernon Jones announced at a Wednesday protest in support of President Donald Trump that he is officially joining the Republican Party, saying that he has been fighting "demon Democrats." "Donald Trump has just begun. I'm a part of his team. And we're going to take back this country," the former Democrat said.
Jones made the remarks during a pro-Trump demonstration organized by Women for America First at The Ellipse in Washington, D.C., ahead of Congress counting the electoral votes later in the day. Jones, who was elected as a Democrat, endorsed Trump last April. He said then that he did not plan to leave the Democratic Party, but he became a vocal supporter of the president.

Jones then thanked Mike Lindell, the CEO of My Pillow and a prominent Trump supporter, for influencing his decision. The former Democratic politician said Lindell had given him courage through all his "trials and tribulations fighting those demon Democrats."

"I want to make clear about one thing. Donald Trump has just begun. I'm a part of his team. And we're going to take back this country," he said.

Newsweek reached out to Georgia's Republican and Democratic parties for comment but did not immediately receive a response.

Thousands of Trump supporters have converged on Washington, D.C., to protest in support of the president on Wednesday. Congress will formally count the electoral votes to certify President-elect Joe Biden's win in the Electoral College. At least 13 Republican senators and more than 100 House Republicans plan to object to Biden's win in several battleground states, but these efforts are widely expected to fail.

In order for an objection to succeed, both the Senate and the House must separately agree to approve it. The House is narrowly controlled by Democrats and there appears to be more than enough Republicans planning to vote against any objections alongside their Democratic colleagues.

Trump and his loyalist supporters continue to claim that Biden won the election through widespread voter fraud. They have not provided evidence to support this extraordinary allegation. More than 50 legal challenges filed by the president and his supporters have failed in state and federal courts, with several judges appointed by Trump and other Republicans pointing out in their rulings that lawyers have not provided evidence.

When Jones endorsed Trump last April, he initially announced he would resign from the Georgia State House. He later changed his mind and continued to serve out his term. Jones did not seek reelection and Democrat state Representative-elect Rhonda Taylor will take his seat when she is sworn in on January 11.
#Donald Trump  #Joe Biden
Add Comment