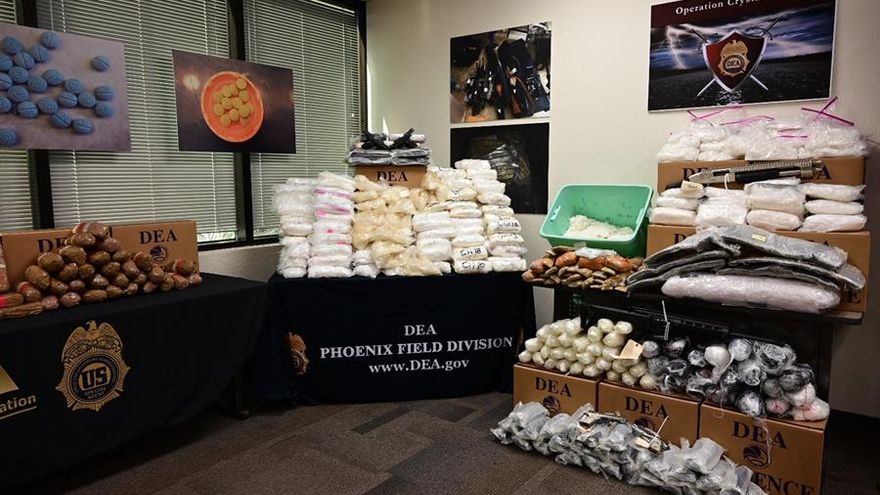 "Hard blow" to Mexican cartels in the US with more than 1,800 arrested

The Attorney General of the United States, William Barr, and Timothy J. Shea, acting director of the Drug Enforcement Administration (DEA), announced this Thursday the result of an operation that dealt a "severe blow" to the main drug distribution centers of the Mexican cartels in US, with the arrest of 1,840 individuals and the seizure of more than 28,560 pounds (12,955 kilos) of methamphetamine.
Officials announced the results of the first six months of the "Cristal Shield" operation, which has also resulted in the seizure of 284 firearms and $43.3 million from drug trafficking.

The main targets of the operation were the Sinaloa Cartel and the Jalisco Nueva Generación Cartel.

Methamphetamine is a brutal drug linked to violent crime and responsible for too many overdose deaths, Barr said during a news conference in Phoenix where the raid was announced.

According to the federal government, these cities seized 75% of the total methamphetamine confiscated by the DEA in 2019.

This problem will not be solved until this problem is solved in Mexico as well, Barr said, and assured that he is working closely with the Mexican government, including the possible extradition of cartel leaders to be prosecuted in the United States.

The main objective of "Cristal Shield" was to focus on the methamphetamine distribution centers in the United States.

Officials said they were pleased with the results despite the COVID-19 pandemic, which affected the implementation of this operation.

Barr indicated that one of the tools that drug traffickers are using is the use of applications such as WhatsApp to carry out their operations.

As part of the operation in Arizona alone, 3,900 pounds (1,769 kilos) of methamphetamine were seized, equivalent to 8.8 million doses.

In the months leading up to the launch of 'Crystal Shield,' communities across the country saw an increase in methamphetamine use, Shea said at the news conference.

He added that despite the pandemic, drug trafficking operations have not stopped.
#William Barr  #COVID-19  #Covid
Add Comment