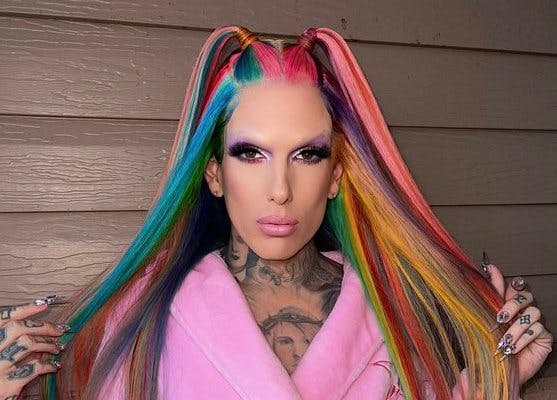 The Youtuber posted a video Thursday denying the allegations that he and Kanye have been having an affair amid the rapper's divorce from Kim Kardashian.

Less than a week since the news of Kim Kardashian's divorce from Kanye West, rumors that the rapper has been secretly having an affair with beauty Youtuber Jeffree Star have set the internet ablaze. However, on Thursday, the make-up artist uploaded a new video denying the accusations, saying, "I'm single. I'm not sleeping with anyone. This is so weird."

In the vlog, viewers see Star logging onto Twitter after waking up to texts and calls asking for comment on the situation. After laughing at some of the tweets about the rumor, he goes on to say, "I like very tall men. Me and Kanye have never hung out and this whole thing is really funny."

The rumor of their affair stems from a recent TikTok by influencer Ava Louise. Following the Kimye divorce headlines, the internet personality made a video claiming that "Kanye's been hooking up with a very famous beauty guru—a male beauty guru. A lot of people in the scene have known for a while." She also claimed that her source was "legit." Many users were quick to guess Star in the comment section.

While Star does mention that the rumor originated on TikTok, he admits, "If Kris Jenner orchestrated this whole thing, happy New Year sweetie girl, but no, Jeffree Star is single and I have never slept with Kanye."

Nevertheless, in the video, he goes on to break down why people would think it's him. His friend points out the most obvious connection: they both are now residents of Wyoming. The Youtuber also recalls mentioning the Yeezy mogul in his 2009 song, "Bitch, Please!" However, he says, "It was very like Eminem. I mentioned like 50 celebrities."