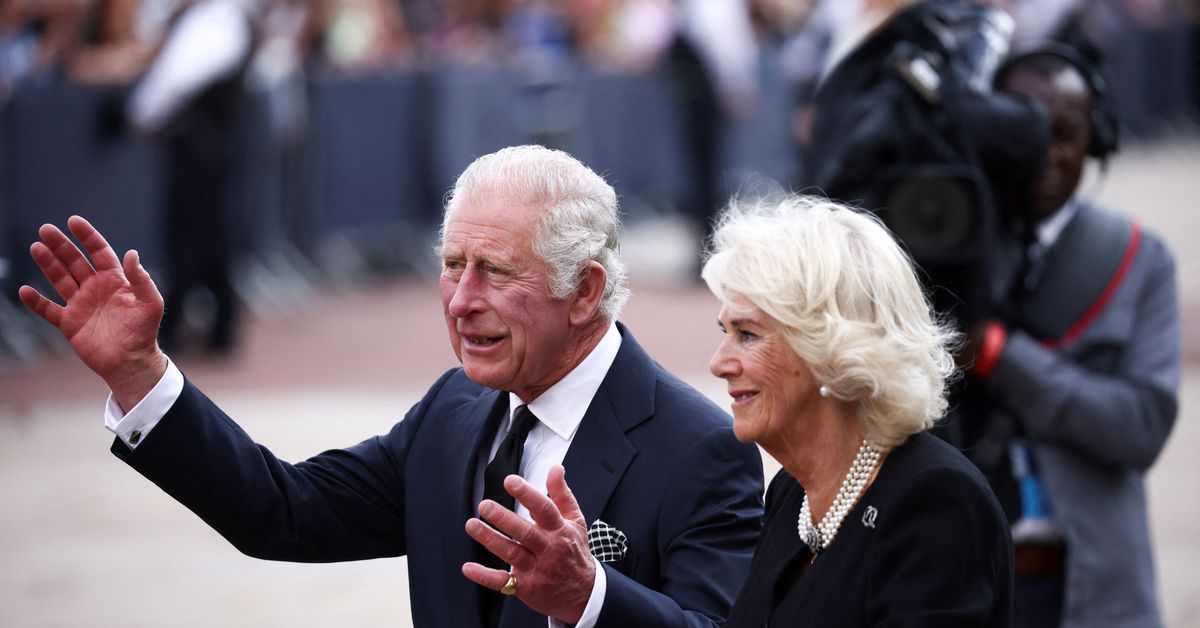 Britain's King Charles paid a heartfelt tribute on Friday to his late "darling mama" Queen Elizabeth, and vowed to serve as monarch with "loyalty, respect and love" as she had done for more than seven decades.

In his first address to the nation, Charles paid tribute to his mother for her devotion to her family and to those she reigned over, saying her loss brought great sadness and a "sense of loss, beyond measure".

Elizabeth, Britain's longest-reigning monarch and a towering presence on the world stage for 70 years, died on Thursday at her home in Scotland aged 96, drawing an outpouring of tributes from at home and around the globe. read more

Her death - which meant he became king and head of state of the United Kingdom and 14 other realms including Australia, Canada, Jamaica, New Zealand and Papua New Guinea - was "the moment I've been dreading", Charles earlier told Prime Minister Liz Truss. read more

"Queen Elizabeth was a life well lived; a promise with destiny kept and she is mourned most deeply in her passing," Charles said in his address, which he delivered from Buckingham Palace with a photograph of her displayed next to him.

"That promise of lifelong service I renew to you all today."

He and other members of the royal family had rushed to be at the queen's side at her Scottish home, Balmoral Castle, when news of her ailing health emerged.

He returned to Buckingham Palace in London on Friday where he was greeted with cheers, applause and a crowd singing "God Save The King". read more

In his televised message, the 73-year-old Charles reflected on his mother's promise she made in 1947, aged 21, to devote her life to the service of her peoples, a vow he pledged to emulate "throughout the remaining time God grants me".

"That was more than a promise: it was a profound personal commitment which defined her whole life. She made sacrifices for duty," he said.

"Wherever you may live in the United Kingdom, or in the Realms and territories across the world, and whatever may be your background or beliefs, I shall endeavour to serve you with loyalty, respect and love, as I have throughout my life."

Charles said he had made his eldest son William the new Prince of Wales, the title that had been his for decades and one traditionally held by the heir to the throne. William's wife Kate becomes Princess of Wales, a role last held by the late Princess Diana.

He also expressed his love for younger son Prince Harry and his wife Meghan, whose exit from their royal roles two years ago caused deep ructions within the family and provoked a major crisis in the monarchy.On Saturday, Charles will be officially proclaimed king at a meeting of the Accession Council held at St James's Palace followed by proclamations across the nation in a show of traditional British pomp and ceremony.

Britain has declared a period of mourning until the state funeral for Elizabeth, which will be held in a little over a week's time.

Dignitaries from around the world are expected, including U.S. President Joe Biden, who said Friday he would attend.

An online book of condolence has been opened, while thousands gathered at royal palaces to pay their respects to the woman once described by her grandson Harry as "the nation's grandmother", with some shedding tears as they laid flowers.

Joy Hounsome, 86, said she had impulsively kissed Charles's hand as she offered sympathy for his loss.

"He didn't flinch," she laughed. "He said thank you very much."

There were gun salutes at London's Hyde Park and at the Tower of London, and the bells tolled at Westminster Abbey and St Paul's, as did the Sebastopol Bell at Windsor Castle, captured during the 19th Century Crimean War.

Regular business in parliament was replaced with a special session for lawmakers to pay tribute to the queen. Parliament will also convene on Saturday, something it rarely does, to approve a message of condolence to the king.

"Since last night's shocking news, we have witnessed the most heartfelt outpouring of grief at the loss of her late majesty, the queen," Truss told lawmakers.

"She was the rock on which modern Britain was built," said Truss, who Elizabeth appointed just on Tuesday in her last public duty - the 15th premier of her long reign.

Bereft of its symbol of continuity and resilience, Britain begins its new era with a new king and new prime minister in grave economic crisis and following years of political division.

Long-running industrial action sparked by surging inflation was cancelled during the period of mourning. The Bank of England said it would delay its monthly meeting to set interest rates by one week.

The queen had been suffering from what Buckingham Palace had called "episodic mobility problems" since the end of last year, forcing her to withdraw from nearly all her public engagements. Her husband of 73 years, Prince Philip, died in April last year.

Condolences poured in from around the world. From the Sydney Harbour Bridge to the European Commission in Brussels and United Nations headquarters in New York flags were flown at half-mast.

"To you, she was your queen. To us, she was the queen. To us all she (will) be with us forever," French President Emmanuel Macron said.

Elizabeth, who was also the world's oldest and longest-serving head of state, came to the throne following the death of her father King George VI on Feb. 6, 1952, when she was just 25 and oversaw a seismic change in the social, political and economic structure of her nation.

She won praise for guiding the monarchy into the 21st Century and modernising it in the process, despite intense media scrutiny and the often highly public travails of her family.

Charles, who polls indicate is less popular than his mother, now has the task of securing the institution's future. The king has been known during his long years as heir for his campaigning over the environment and other issues, which has sometimes led to criticism for meddling. He said his life would now change.

"It will no longer be possible for me to give so much of my time and energies to the charities and issues for which I care so deeply. But I know this important work will go on in the trusted hands of others," he said.

He concluded his address with a message directed to his late mother.

"To my darling mama, as you begin your last great journey to join my dear late papa, I want simply to say this: thank you," Charles said.

"Thank you for your love and devotion to our family and to the family of nations you have served so diligently all these years. May 'flights of Angels sing thee to thy rest'."