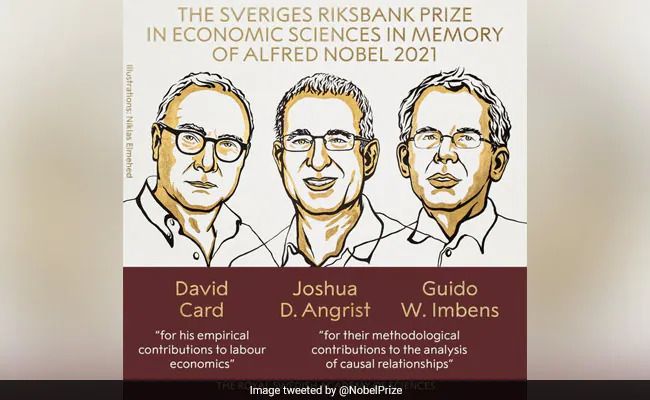 Nobel Economics Prize: The work of David Card, Joshua Angrist and Guido Imbens, who were awarded the Nobel Prize in Economics on Monday, is based on "natural experiments", an innovative method of empirical research developed in the 1990s.

The work of David Card, Joshua Angrist and Guido Imbens, who were awarded the Nobel Prize in Economics on Monday, is based on "natural experiments", an innovative method of empirical research developed in the 1990s.

In some ways they are similar to clinical trials, in which researchers evaluate the effectiveness of new drugs by separating test and control groups at random.

"We are replicating something that could be done in a laboratory," says Julien Pinter, a researcher at the University of Minho in Portugal and an economist at BSI Economics.

But doing something in the controlled conditions of a laboratory and doing it out in the world are two very different things.

Natural experiments differ from therapeutic trials in that -- unlike scientists in the lab -- economists do not control the parameters of the experiment.

The scope of these studies is vast: in the cases of the Nobel winners, they covered education, the labour market and immigration.

For example, Canadian David Card and his American colleague, the late Alan Krueger, who died in 2019, studied the relationship between the minimum wage and employment in the early 1990s.

They compared the labour markets on both sides of the border between the US states of New Jersey, where the minimum wage had been increased, and Pennsylvania, where it had not.

Their research showed that, in that context, the minimum wage increase had no downward effect on the number of employees.

That finding went against the prevailing theory at the time, which assumed that an increase in the minimum wage would destroy jobs as it would make it more expensive for companies to do business.

Card also studied the relationship between immigration and the labour market using another case study: the 1980 settlement of tens of thousands of Cubans in Miami, Florida, who had been allowed to leave the island by President Fidel Castro.

The economist's work showed that this wave of new arrivals did not have a negative impact on employment.

Also collaborating with the late Alan Krueger, American-Israeli Joshua Angrist looked at the link between education and income.

He compared the time spent in the education system by people born in the same year according to their month of birth.

Those born at the beginning of the year -- who therefore had the opportunity to leave school a little earlier -- had on average a shorter education than those born later in the year.

They also had lower wages.

This allowed Angrist to determine that higher levels of education generally led to higher wages.

Dutch-American Guido Imbens subsequently worked with Angrist to refine the interpretation of those results.