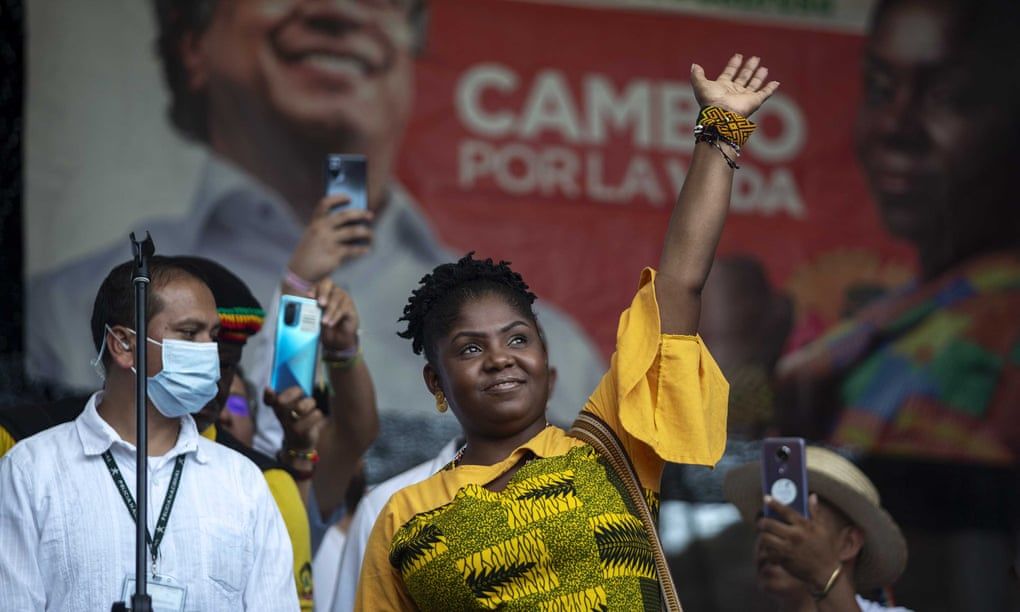 ‘She represents me’: the black woman making political history in Colombia

Mayra Fernanda Mejía, a black single mother and rural activist, never really felt that Colombia’s politicians cared about people like her – until now.

She has been threatened with violence for speaking out against the armed groups that plague her community, and each election season she has witnessed light-skinned candidates pass through the war-torn province of Cauca offering food handouts and empty promises of development.

But on Sunday she will cast her vote for Francia Márquez, who is hoping to become the South American country’s first black female vice-president, on the ticket of the leftist presidential frontrunner, Gustavo Petro.

Mejía is convinced that Márquez’s victory would usher in a new, more equitable chapter in a deeply unequal country. 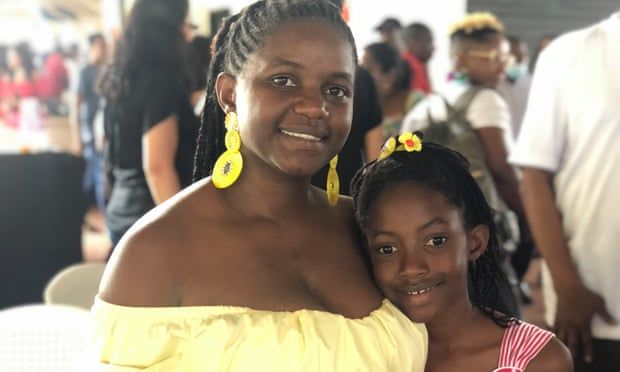 Mayra Mejía with her daughter, who travelled with her to see Márquez speak.

Afro-Colombians make up nearly 10% of Colombia’s population of 50 million, descending from enslaved people people brought from Africa to work on sugar cane plantations, goldmines and the large estates of landowning Spanish colonists. Only Brazil in South America has a larger population of Afro-descendants, and like there, in Colombia they are vastly underrepresented in business and politics.

If elected, Márquez would join Costa Rica’s Epsy Campbell Barr as one of only two black female vice-presidents in Latin America, and her route from domestic worker to vice-presidential candidate has been anything but typical.

The 40-year-old has been an activist since she was 13 years old, when her village was threatened by the construction of a dam. Since then, she has worked as an artisanal goldminer and cleaner, studied for a law degree, been forcibly displaced by local mafias and survived at least one assassination attempt.

In 2014, after illegal goldminers clearcut forests, diverted a river and dumped mercury into local water supplies, the single mother of two led a march of 80 women from the mountains of her home town on a 350-mile march to the capital, Bogotá. Four years later, Márquez was awarded the prestigious Goldman environmental prize.

“What sums her up best is her humility,” said Beatriz Cocino, 49, who has marched alongside Márquez in campaigns against goldminers. “Out in the countryside, it is us working the fields to feed the cities, but we’re totally forgotten.”

Cocino had travelled an hour from her village to Santander de Quilichao to hear the candidate speak at a recent campaign event.

“I’m so proud that Francia is here, representing us, because I’m proud to be a Black woman,” said Cocino. “Today it’s Francia, but tomorrow it could be any of us.”

Márquez was chosen as Petro’s running mate after winning more than 750,000 votes in a primary in March, beating a number of established career politicians. Both candidates belong to the leftist Historic Pact coalition, which features many anti-establishment politicians and political newcomers. Colombia has never had a leftwing president.

Petro, who as a youth was a member of the now defunct M-19 guerrilla group, has served as mayor of Bogotá, and came second in the last presidential election in 2018.

His main rival for the presidency is Federico Gutiérrez, the former mayor of Medellín, Colombia’s second city, who is widely viewed as a continuation of the rightwing status quo. If neither candidate takes more than 50% of votes on Sunday, the race will go to a runoff in June.

Also on the ballot will be Colombia’s fragile peace process with the leftist rebels of the Revolutionary Armed Forces of Colombia (Farc), who demobilised after a peace deal was signed in 2016, ending decades of vicious civil war against state forces and their paramilitary allies that killed over 260,000 people and displaced 7 million.

Petro and Márquez are viewed as fervent supporters of the deal, while Gutiérrez is thought to be a skeptic.

“Their vision of peace and commitment to it is consistent with the vision of a large part of the population that has been a victim of the armed conflict in Colombia,” Mejía said.

But political violence continues to dog the campaign – a particular worry in a country where four presidential candidates have been murdered since the 1980s. Hours after Márquez’s trip to Santander de Quilichao, a prominent local community leader and land rights activist, Édgar Quintero, was murdered by four gunmen. Days later, another Márquez supporter was murdered in southern Cauca. 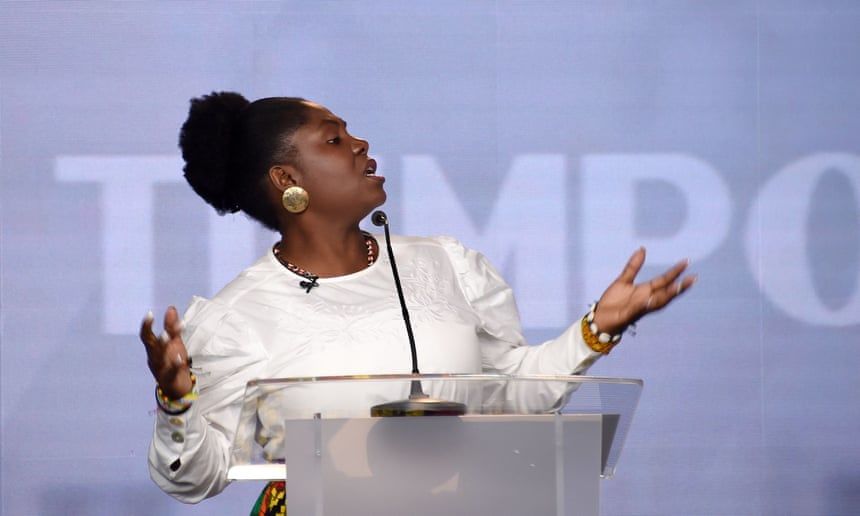 Francia Márquez speaks during a debate with other vice-presidential candidates in Bogotá in March.

As Márquez met other black female leaders from the region, supporters whooped and cheered, holding homemade signs aloft. “She represents me,” read one, held by a young girl. “For a life without violence,” read another.

On billboards and car windows across the country, posters portray Márquez with a clenched fist, reminiscent of the “HOPE” posters that circulated during Barack Obama’s campaign. The rapper Snoop Dogg has shared her story on social media.

But while her campaign has inspired rapturous pride and joy in her supporters, it has also brought implicit racism to the surface of public discourse.

Márquez has been mocked as “King Kong” on social media – even by a senator from her coalition. One rightwing commentator accused her of sowing “ignorance, hate and resentment” in what was widely seen as a racist dogwhistle. And at a recent campaign in Bogotá, a laser-pen was shone on her chest in what many saw as a thinly veiled threat of violence.

“Colombia is known as one of the most racist countries in Latin America for a reason,” Mejía said, her diction tinged with anger. “In Colombia they speak about Black women as being ‘pretty little black things’ and who do Colombia’s legislatures give priority to? White and mestizo people, not Black people.” 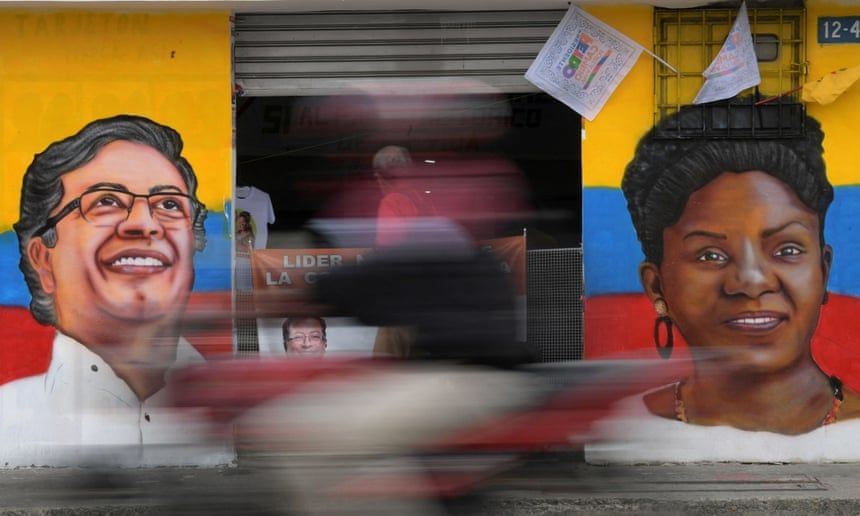 A mural in Cali depicts Gustavo Petro and Francia Márquez, the frontrunning presidential and vice-presidential ticket.

In front of a stage in the central plaza of Santander de Quilichao, venders hawked ice creams as the crowds gathered under a punishing sun.

Beneath the statue of Francisco de Paula Santander – a hero of independence and one of Colombia’s first presidents – a band of Nasa Indigenous musicians played panpipes and drums.

“I hope that one day I can be like her,” said Gabriela Castillo, a teenaged student, over the hubbub. “Everything she has achieved has been through effort, tears and truth.”

Mariela Carabali, 62, was similarly effusive. “Francia came from below and she will keep climbing.”

When Márquez appeared, flanked by campaign aides, local leaders and a bodyguard holding an iron shield, the cacophony was almost deafening.

Scanning the sea of bodies before her, she took a breath and her infectious smile broadened. “Good afternoon, Cauca,” she began. “Your daughter is here.”