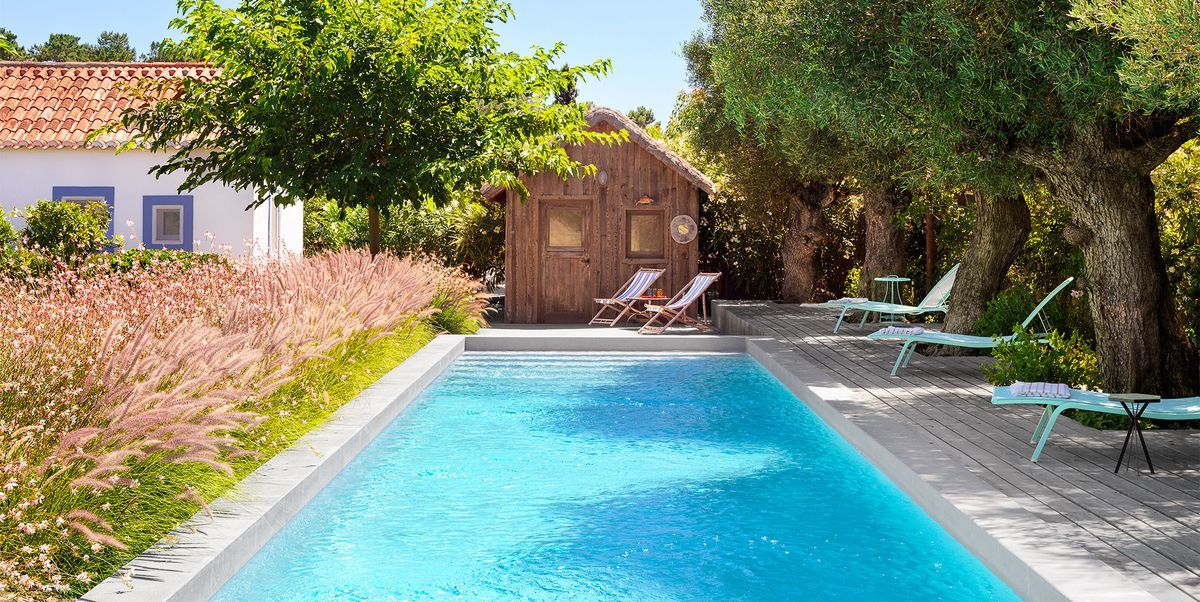 Only the best for designer Jacques Grange’s friends.

Florence Grinda is an enthusiastic collector, to say the least. “I adore buying things,” Grinda admits. She has a group of cockerel sculptures in her Paris apartment, and the kitchen of her chalet in Gstaad is filled with black ceramics from Vallauris. Meanwhile, her vacation home near Comporta in Portugal is stocked with rattan mirrors, midcentury Murano glass fish, and turquoise-colored vases from the Burgundy village of Accolay. “She’s quite insatiable,” says her longtime friend Jacques Grange, who oversaw the architectural design of her Portuguese getaway. “She’s like a child who wants all their toys.”

The pair have known each other for 50 years and counting. “Florence is charming, amusing, and not afraid of speaking her mind,” says Grange, who is far from alone in falling under her spell. Her list of friends over the years has included Brigitte Bardot, Andy Warhol, and Hubert de Givenchy. 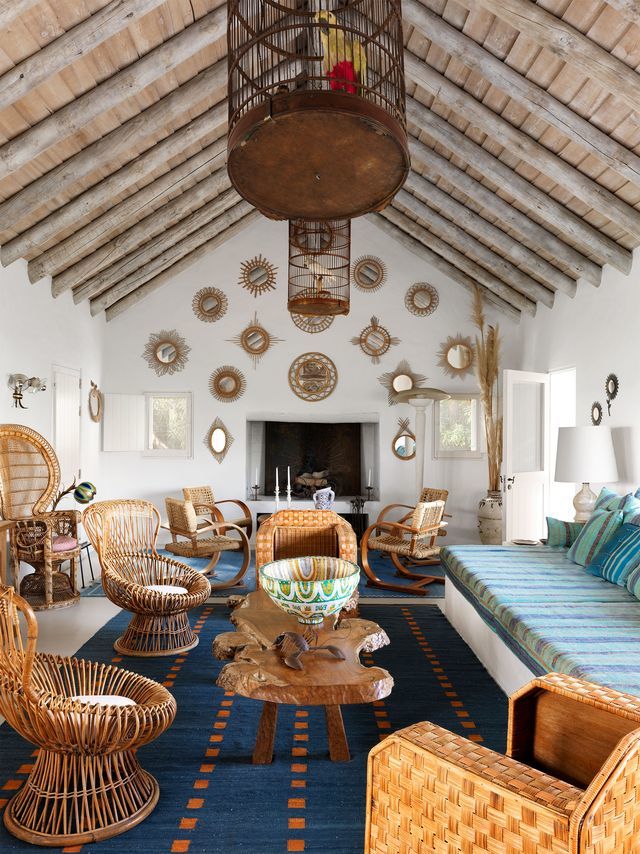 The sitting room houses some of Grinda’s flea-market finds. Vintage wicker chairs (left) are by Franco Albini, and the German rattan armchair (right) is from Galerie Vauclair. The carpet is from Didier Benichou, and the toy birds in cages are from the Stork-Club.

In recent times, the increasingly fashionable region around Comporta has drawn such celebrities as Madonna, Mick Jagger, and Harrison Ford. Christian Louboutin and Anselm Kiefer have bought houses there, but among the first of the jet set to put down roots in the area was Grange himself. He still remembers gazing out the window of a plane between Lisbon and Faro in the early 2000s and spying an immense beach with nobody on it. “What’s that?” he turned and asked his partner, antiques dealer Pierre Passebon. Grange found out on his return to Paris. “Oh, that’s my family’s property,” asserted one of his assistants at the time. She was the late Vera Iachia, a member of the Espirito Santo banking family, whose grandfather and great-uncle had bought more than 10,000 hectares of land near Comporta in the 1950s. Grange bought a property near the village of Carvalhal consisting of several huts tucked behind the dunes. Each structure is edged in indigo blue, a distinctive local architectural trait. 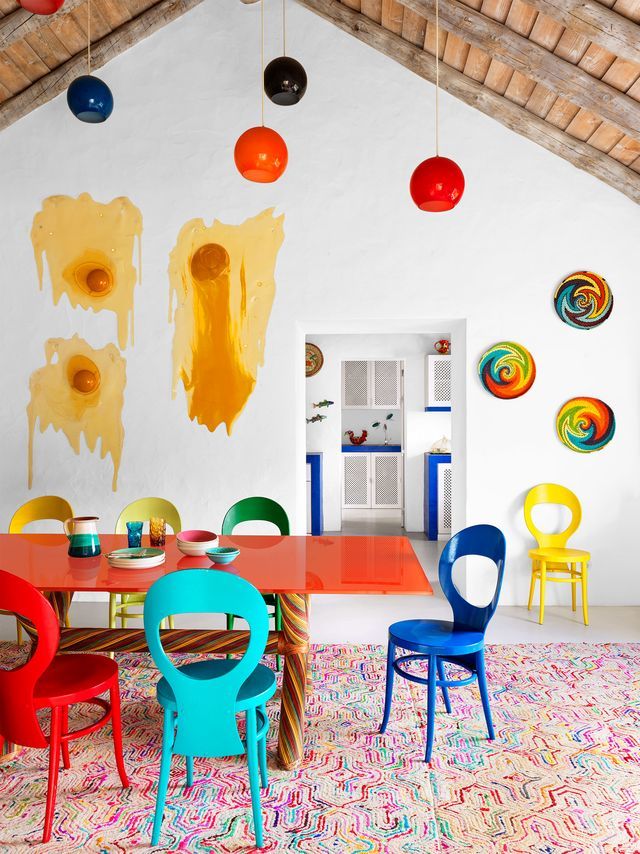 Repainted 1960s Baumann chairs add pops of color in the dining room. A vintage table is from Cleto Munari, the Rug Republic rugs (three sewn together) are from BHV, and the resin wall art (left) is by Jean-François Fourtou.

The setting of Grinda’s home is quite different, but no less spectacular. She acquired the land six years ago, largely for the view. It looks directly onto rice fields, part of the Sado nature reserve, renowned for its white storks that grow to nearly four feet. Grange designed three separate buildings arranged in a U to shelter the garden from winds that arrive from the north. The architecture is based on the region’s traditional cabanas but with much larger volumes. The two structures with terra-cotta--tiled roofs are home to the guest quarters and to an entertaining space with a kitchen and dining room. The third, with a sitting room and principal suite, is topped with straw. “I wanted to create variety,” says Grange, who worked with a local builder, Nuno Carvalho. “There’s something so poetic about straw houses.” 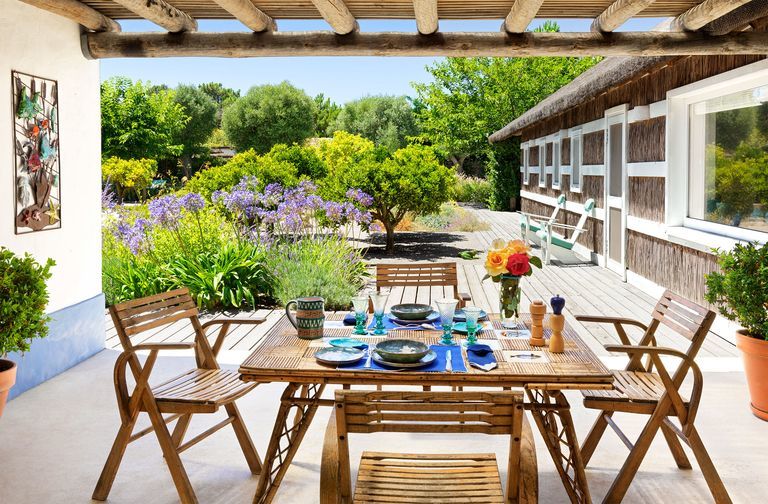 On the terrace, vintage chairs from a Paris flea market surround a custom bamboo table with tile inlays. The dishes are from Dominique Pérot, and the ceramic pitcher is from Robert Picault.

Grinda entrusted the garden design to another friend, the renowned French landscape architect Louis Benech, whose projects have included the renovation of the Tuileries in Paris. “I totally trust his taste,” she says. The scheme he devised includes lemon and orange trees arranged in squares, a flurry of blue flowers, and a lap pool now regularly used for AquaFit classes.

When it came to the interiors, Grange and Passebon helped to source a number of pieces. The large vase by Lisbon-based ceramist Bela Silva and the suspended birdcages in the sitting room were bought at Stork-Club, Grange and Passebon’s shop in Carvalhal. Much of the rest reflects Grinda’s own style, suffused with humor and fantasy. She loves rattan and color, and fearlessly combines pieces of diverse provenance. A number of items are signed, such as the Franco Albini armchairs and the credenza by the postwar French duo Guillerme et Chambron in the sitting room. Others are more lowbrow but no less chic. Fabrics were acquired from the Marché Saint-Pierre in Montmartre, known for its bargain-basement prices. A bust covered in brightly hued beads was brought back from South Africa, and the rug in the dining room is a patchwork of three identical ones from the BHV department store in Paris. 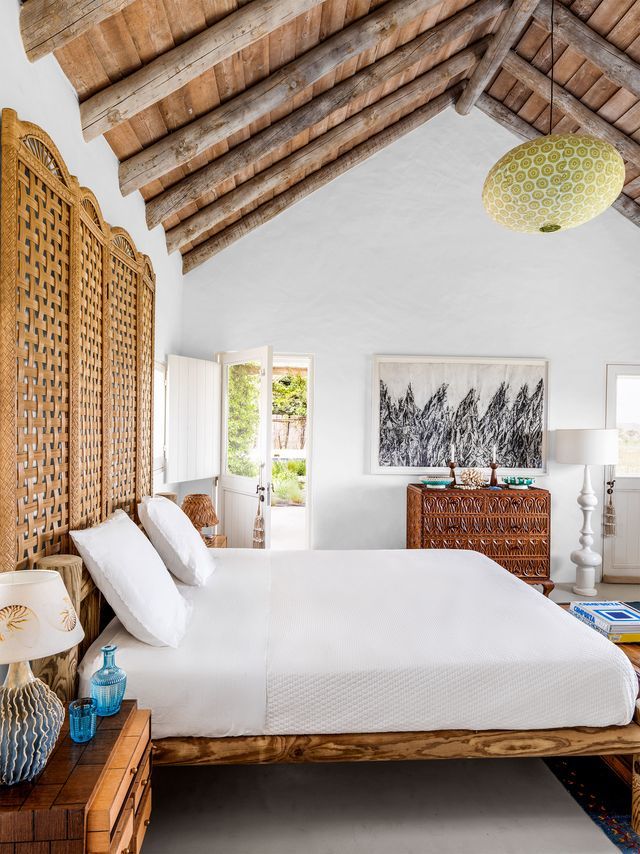 A pendant from Loja de Cá hangs from a soaring pine ceiling in the primary bedroom. The rattan screen and floor lamp are both from Paris flea markets; the vintage Mozambique mahogany cabinet is from Santa Maria Velharias. The artwork is by Ophélie Asch.

And while the Comporta region may no longer be the wild, undiscovered paradise of 20 years ago, for both Grange and Grinda it retains its charms. “The magic is still there,” he says. “I love the natural beauty,” adds Grinda, who spends six months a year there. “Whenever I’m here, I feel true happiness.” 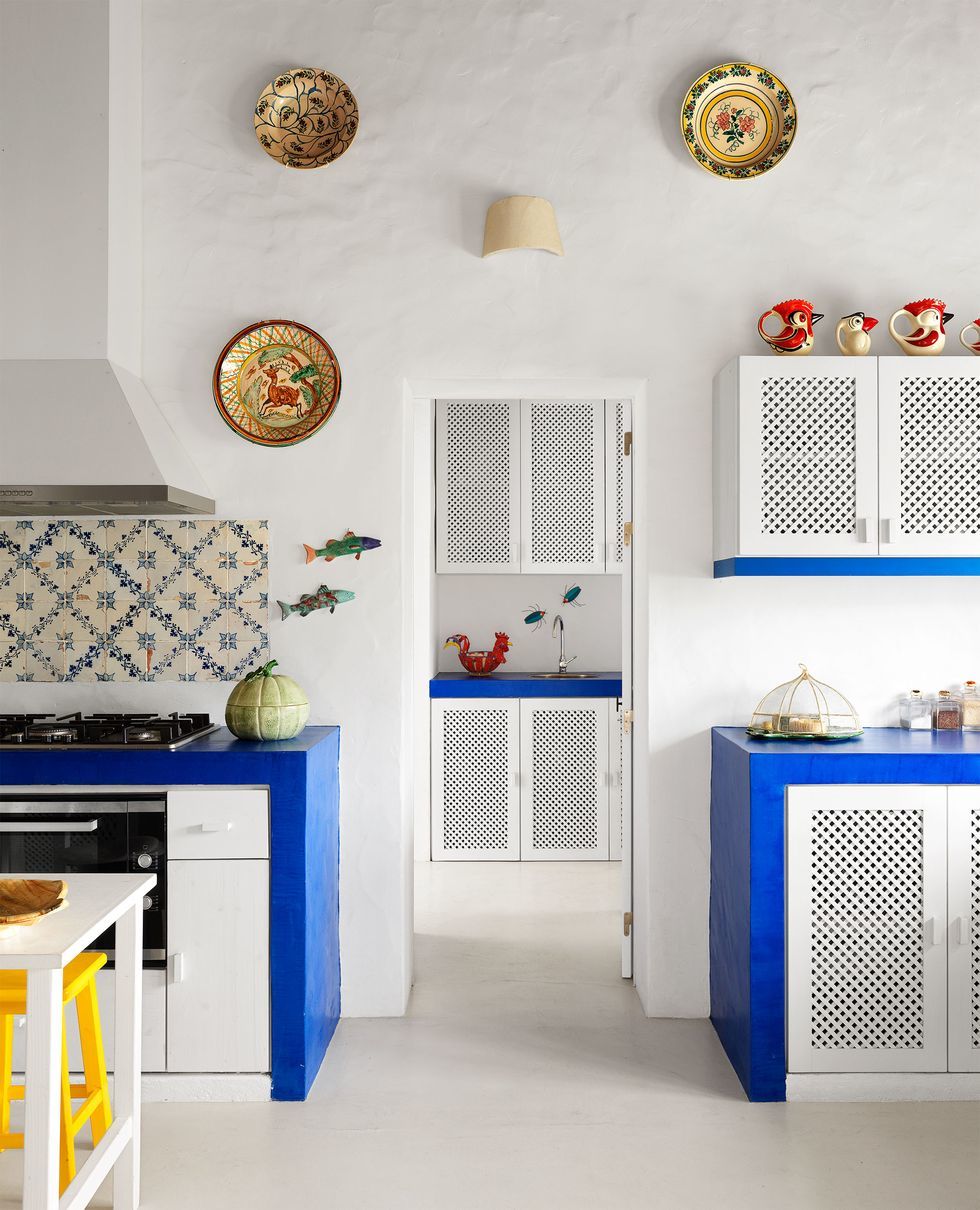 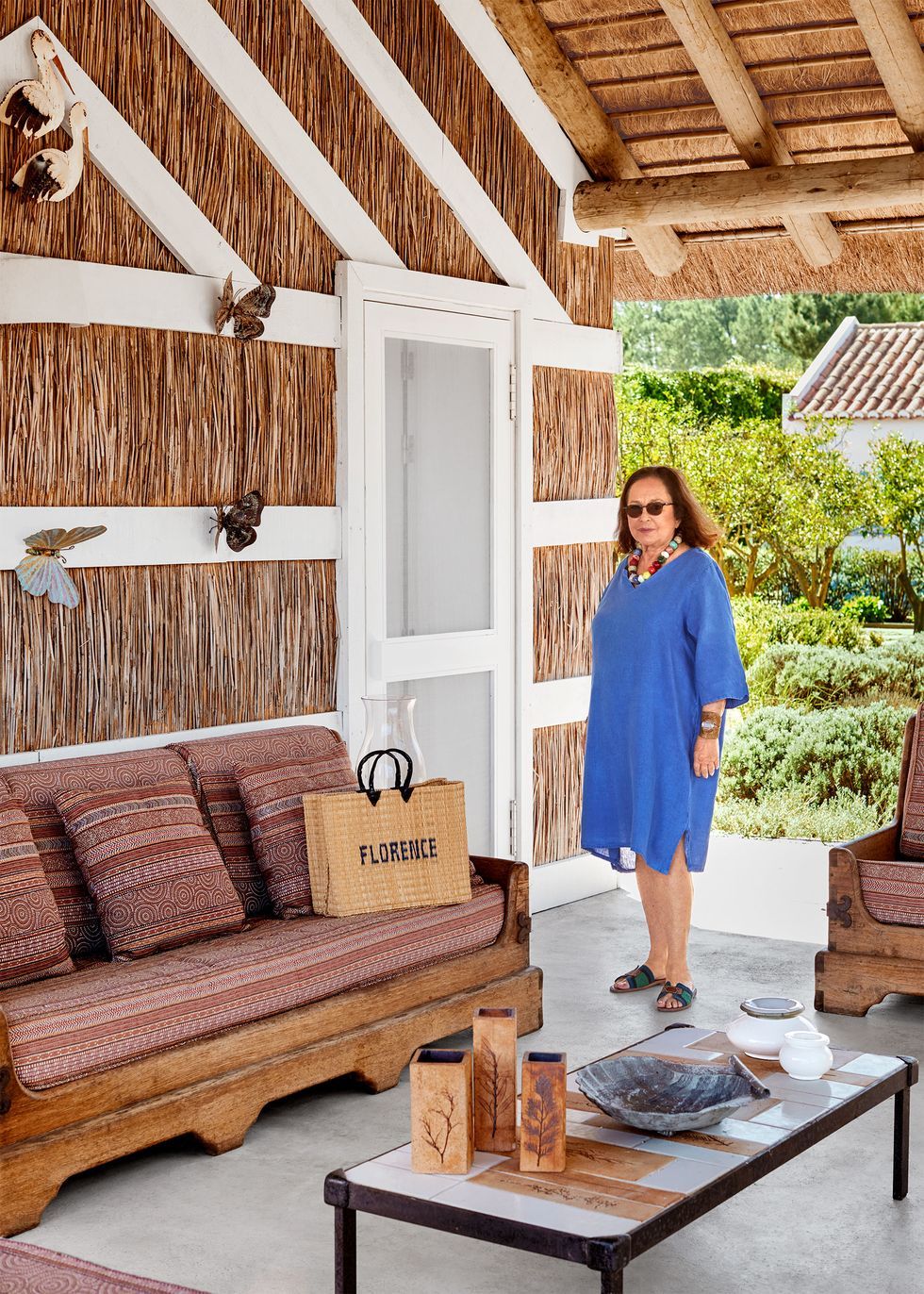 Outdoor living area : Grinda on the terrace outside her bedroom. 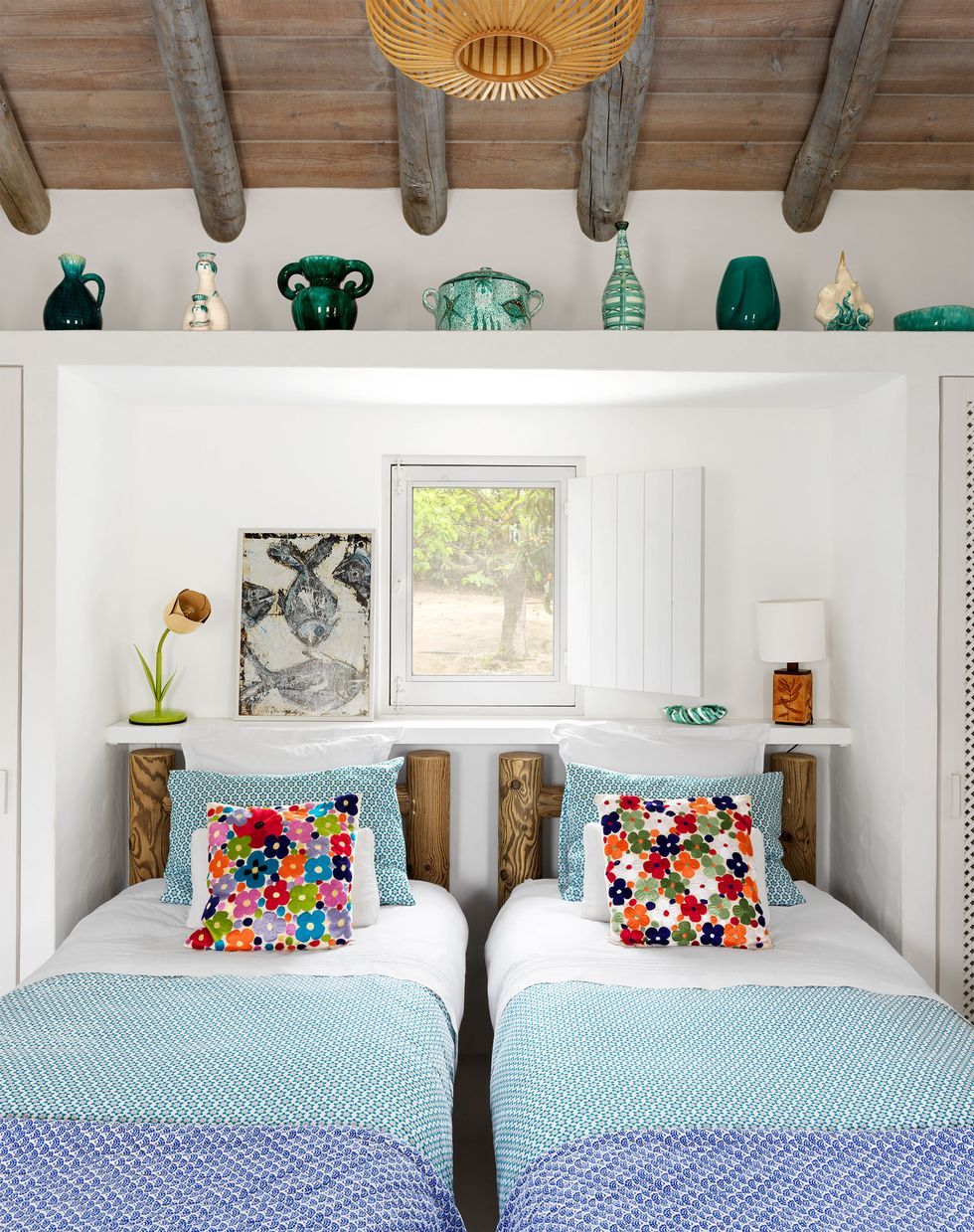 Guest room : Patterned blankets from Monoprix mix with floral cushions from Marrakech. The artwork is by José Canudo. 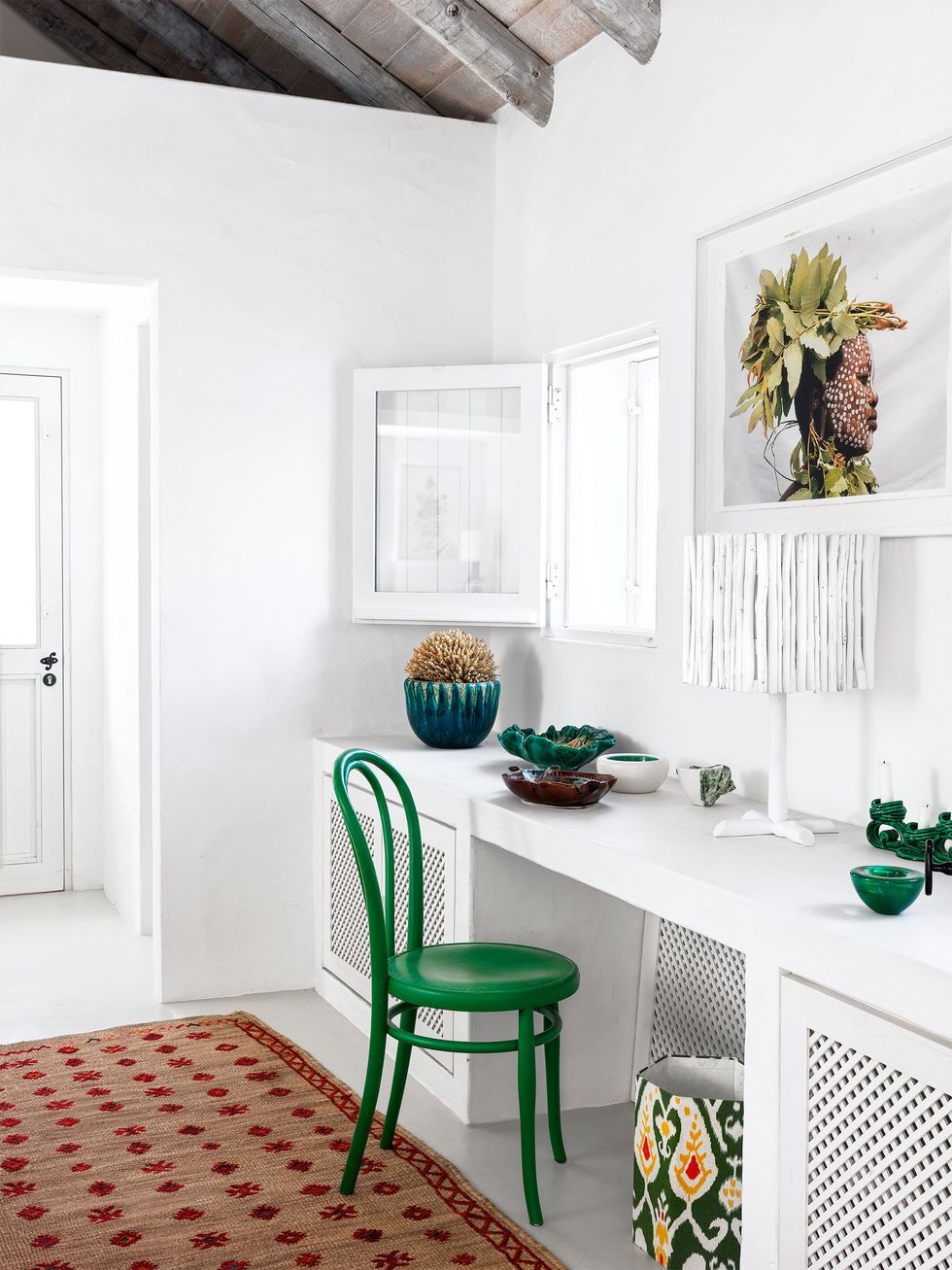 Guest bedroom : Grinda’s flea-market finds fill the guest bedroom. The desk and storage are custom painted concrete, the Thonet chair is painted green, and the rug is Moroccan. The photograph is by Jean-Michel Voge. 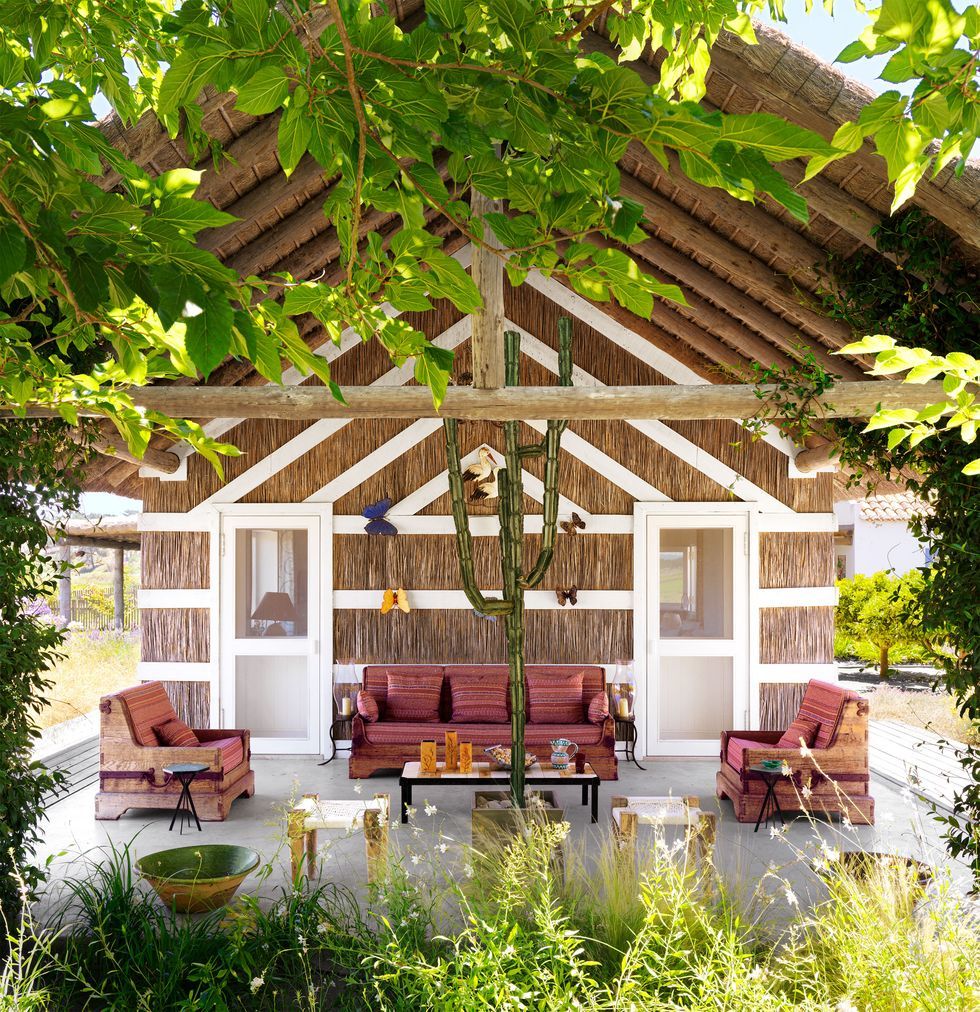 Terrace living area : The 1970s French oak and wrought-iron chairs and sofa are from Barracuda Interiors in Lisbon. The vintage table is from Roger Capron.