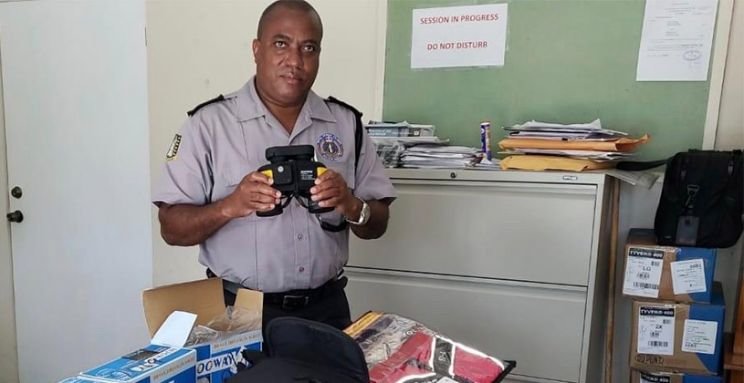 The Joint Task Force will be receiving a donation of critical maritime security equipment today from the Governor’s Office in support of its work to protect the Territory’s borders.
The first package arrived in the Territory and contains maritime binoculars and life preservers. This will be shortly followed by shipments that contain state of the art night-vision goggles and GPS devices.

Governor Augustus Jaspert said this support means that more law enforcement officers will be able to conduct marine patrols, where they will be equipped with the latest technology to spot and deter illegal entries into BVI. This will help protect against the spread of COVID-19 and safeguard public health.

“The Joint Task Force has been working extremely hard to patrol our extensive land and sea borders. This new equipment will help extend their efforts and capabilities even more. It is imperative that we do everything we can to protect the integrity of our borders and the safety of the people of BVI,” the Governor stated.

He said, “It is much-needed equipment that will provide for the safety of officers and enhance the ability of the team to do the job more effectively especially in the COVID-19 era of protecting our borders and communities.”

The maritime security equipment will be transferred to the Royal Virgin Islands Police Force (RVIPF) and the Customs Marine Team after the Joint Task Force no longer requires it.

In addition, the United Kingdom has also funded essential equipment for the RVIPF’s main sea vessel, St Ursula, to get it back on the water and kitted out with high-specification navigation equipment.

The Governor said that this will increase both agencies’ long-term capacity to tackle criminal activity at sea.

The Joint Task Force is a collaboration between officers of the Immigration Department, Her Majesty’s Customs, and the Royal Virgin Islands Police Force. This task force was developed in response to COVID-19 to maintain the security and integrity of the Territory’s borders and to provide effective enforcement of curfew requirements while giving visible reassurance to communities.
#COVID-19  #Covid
Add Comment