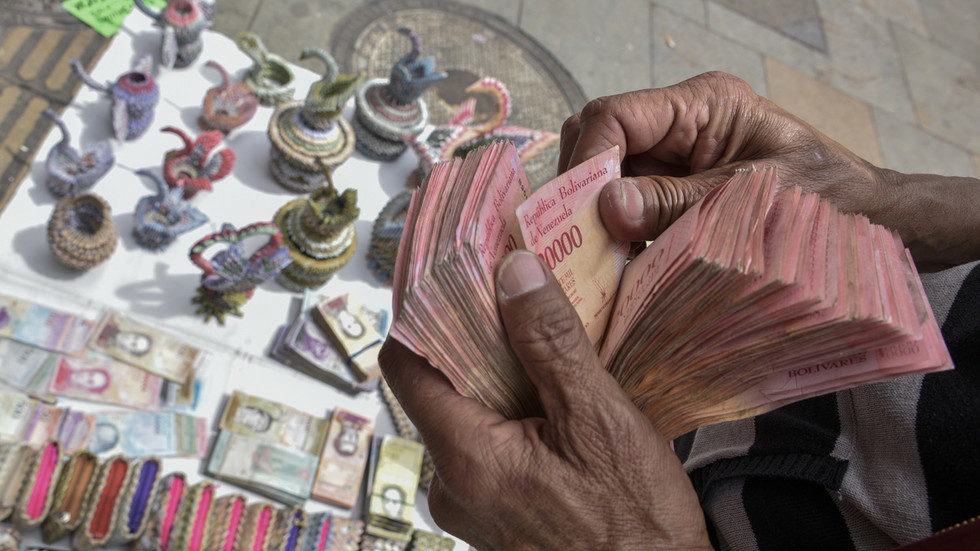 Venezuela to issue 1-million-bolivar bill, but it’s worth only 50 cents amid raging hyperinflation

Venezuela is set to have a new highest valued banknote of one million bolivars as soon as next week. But as the sanctions-hit country is facing enormous inflation, the bill is only worth around 50 cents.

The nation’s central bank announced on Friday that it will introduce three new banknotes worth 200,000, 500,000, and one million bolivars. The new bills are set to come into circulation on March 8.

The regulator said the banknotes are meant to “complement and optimize the current denominations, to meet the requirements of the national economy.” But even if you put all three banknotes together, they are worth less than one US dollar at the current official rate. As of Friday, one US dollar was being exchanged for around 1.889 million bolivars, meaning that 1 million bolivars is worth around 52 cents.

The economy of the Bolivarian Republic has been under severe pressure in recent years, with the situation severely deteriorating after the US slapped the country with sanctions. The nation is suffering from hyperinflation, which reportedly hit 3,000 percent last year.

As the Venezuelan currency rapidly depreciates, it is being replaced by the US dollar, with goods mostly priced in the greenback. At the same time, Caracas-based consultancy Ecoanalitica estimates that two-thirds of transactions across the country are made in foreign currency. When the central bank revealed the new bills, Director and Partner at Ecoanalitica, economist Asdrubal Oliveros, said the banknote is good for nothing more than public transport – one of the few services reliant on the paper bolivar.

Oh ya 62 days ago
Sad because printing that bill costs more than it is worth. But toilet paper is a good thing. This will be coming to many countries in the world as central banks are flooding the world trying to keep the markets alive. Venezuela and Zimbabwe and Argentina are living proof you can not print your way out of debt
View all comments (1)Add comment