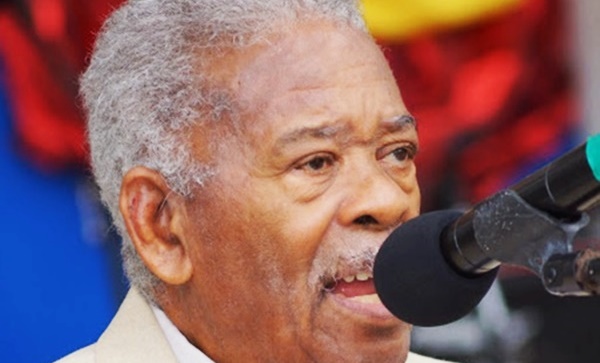 A legend, a true statesman, a strong and principled politician were some of the words used to describe the late former Premier, Honourable Ralph T O’Neal, OBE.

The former Premier passed away at about 2 pm at his McNamara residence on Tortola in the presence of family members on Monday, November 11.

Legislators from either side of the political divide have public paused to salute the British Virgin Islands’ longest-serving elected representative.

“A giant tree has fallen in the Virgin Islands forest. A man who can only be described as a legend. I count myself as very fortunate to even have had a conversation with this great man. As a leader, he had a steady hand on the tiller, navigating many treacherous waters during his tenure,” government legislator Vincent Wheatley said in a tribute on social media.

He further said the former Premier has left “a strong legacy” for present and future politicians to uphold.

“Rest easy, great leader! You have run your leg of the race well. Now rest in the comforting arms of the Creator! God speed,” Wheatley added.

“My heart is extremely heavy after shortly receiving news,” Penn said in a social media tribute. “A true statesman who served his people of the Ninth District and wider Virgin Islands with honour and distinction for over four decades. I remember him as a man with a great sense of humour, extremely knowledgeable and a great sense of love and patriotism towards these Virgin Islands and its people.”

Honour to have served together

Penn said he felt it an honour and privilege to have served with him in the House.

“He was someone always eager to share his knowledge and always did what was in the best interest of these Virgin Islands and its people, despite what direction the political winds were blowing,” he remarked.

“We remember Mr O’Neal as a great statesman, as well as the college’s staunchest champions in its three decades of existence. We join with the rest of the community in remembering this great son of the soil while offering comfort and solace to his loved ones.”