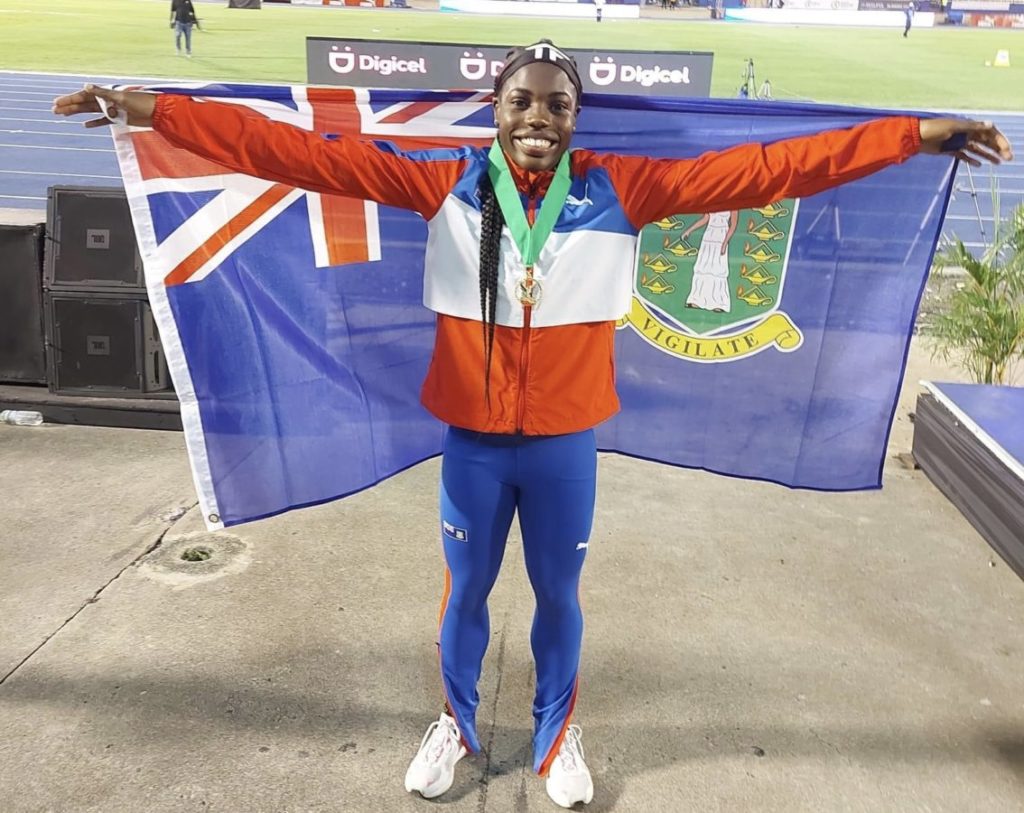 Emerging Virgin Islands track and field sensation, Adaejah Hodge is currently poised to return from the 49th staging of the CARIFTA Games with the Austin Sealy Award for most outstanding performance at the Games after she copped a second gold medal in the Girls Under-17 long jump.

The Atlanta-based Hodge leapt out to a winded aided 6.20 metres to capture the long jump before stepping on the track to ease through the girl’s U-17 200 semi-final in the fastest qualifying time of 23.74 seconds.

The 16-year-old is now the favourite to complete the U-17 sprint double on tomorrow’s final day of competition.

On Saturday, the first day of the Games, Hodge ran a swift 11.29 seconds in the Girls U-17 100 metre finals, just two-hundredths of a second outside of Jamaican Brianna Williams’ CARIFTA Record of 11.27 seconds set back in 2018.

Hodge, in an interview with SportsMax, noted she was gunning for Williams’ record as both sprinters shared the same birthday, and it would have been incredible if she was able to complete that feat. She also said she was pleased with her performance and that was the main aim of the championship.

Hodge also received plaudits from two-time Olympic 100-metre champion Shelly-Ann Fraser-Pryce. In an interview with SportsMax, Fraser-Pryce said she has been very impressed with Hodge’s showing at the Game. The Jamaican, widely considered the best female sprinter of her generation, said Virgin Islands athlete runs with a lot of confidence knowing she is way better than her other competitors, which is something that impresses her.

At the end of day two (Sunday, April 17) of the games, the BVI was second place on the standings with five medals. Savianna Joseph had set the tone for the BVI’s performance with a gold in the Girls Under-17 Shot Put. She registered a mark of 13.54 metres to win that event.

Jah’Kyla Morton, one of the territory’s emerging, talented young athletes also copped a bronze medal in the girl’s U-17 High Jump competition. She cleared a height of 1.60 metres to clip Trinidad and Tobago’s Gianna Paul for the bronze.

Meanwhile, A’Keela McMaster got in on the act with a silver medal in the girl’s Under-20 Heptathlon competition. She finished with a total point of 4,246, one point ahead of Trinidad and Tobago’s Gianna Paul and nearly 800 points behind Jamaican Shania Myers who won Gold.

The territory sits behind Jamaica who leads with 54 medals.