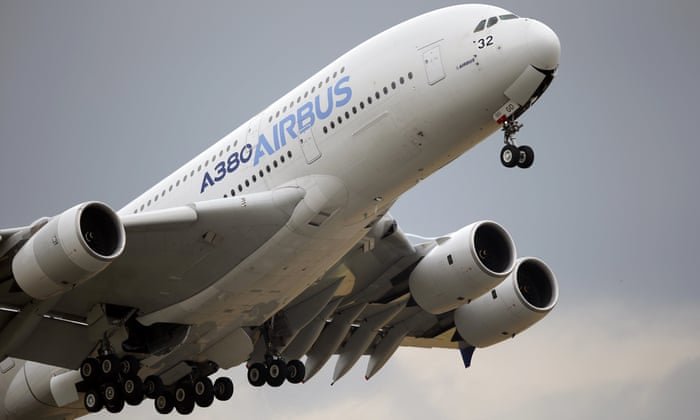 Business as usual: Airbus to pay record £3bn in fines for 'endemic' corruption

UK court sanctions fines after firm admits using agents across world to bribe officials to land high-value contracts
Airbus, Europe’s largest aerospace multinational, is to pay a record £3bn in penalties after admitting it had paid huge bribes on an “endemic” basis to land contracts in 20 countries.

Anti-corruption investigators hailed the result as the largest ever corporate fine for bribery in the world after judges declared that the corruption was “grave, pervasive and pernicious”.

The planemaker agreed to pay the penalties on Friday after reaching settlements with investigators in the UK, France and the US to end inquiries that started four years ago.

In the high court in London, Dame Victoria Sharp, the President of the Queen’s Bench Division, approved the settlement struck with the UK’s Serious Fraud Office (SFO).

She said: “The seriousness of the criminality in this case hardly needs to be spelled out. As is acknowledged on all sides, it was grave.”

She added that the scale of the wrongdoing demonstrated that bribery was “endemic in two core business areas within Airbus”.

Allison Clare, for the SFO, told the court the company had paid bribes in Malaysia, Sri Lanka, Indonesia, Taiwan and Ghana between 2011 and 2015.

Airbus, which admitted five counts of failing to prevent bribery, had used a network of secret agents to pay large-scale backhanders to officials in foreign countries to land high-value contracts.

This was run by a unit at its French headquarters, which its one-time chief executive Tom Enders reportedly called “bullshit castle”.

Hugo Keith, for Airbus, said the settlement will “draw a line under the investigation and the grave historical practices” exposed by prosecutors.

Airbus hopes the settlements, approved by courts in the three countries, will end turbulence within its management which had led to scores of senior executives being sacked. The firm is one of the largest employers in the UK, with a workforce of 13,500.

The penalties will be paid to the governments of the three countries that investigated Airbus, with £1.7bn going to France and £820m going to the UK Treasury.

The settlement surpasses the previous UK record for a corporate fine for bribery – the £671m paid by Rolls-Royce, Britain’s leading multinational manufacturer, in 2017.

Under the deal, known as a deferred prosecution agreement (DPA), Airbus will pay the penalties and promise to mend its ways. In return, any prosecution of the firm as a corporation will be suspended for three years.

Clare told the court the SFO was still considering whether to prosecute individuals involved in the bribery.

Sue Hawley, the executive director of Spotlight on Corruption, said:“Airbus’s egregious bribery around the world has rightly attracted the largest corporate fine for bribery in history. But this fine will ring extremely hollow if prosecutions of those responsible from Airbus senior management at the time of the wrongdoing do not follow.”

The SFO started its investigation in 2016 after evidence emerged of “irregularities” involving Airbus’s secret agents. The French and American investigations started later.

The US settlement was approved in Washington by District Judge Thomas Hogan, who said: “It was a pervasive and pernicious bribery scheme in various divisions of Airbus SE that went on for a number of years.”

The British government has taken at least 18 months to decide whether to approve the SFO’s request to start prosecutions over the GPT allegations.

In another aspect of the alleged corruption, Airbus started an internal investigation in 2017 after the Guardian uncovered a series of questionable financial transactions in hundreds of leaked bank records and internal memos.