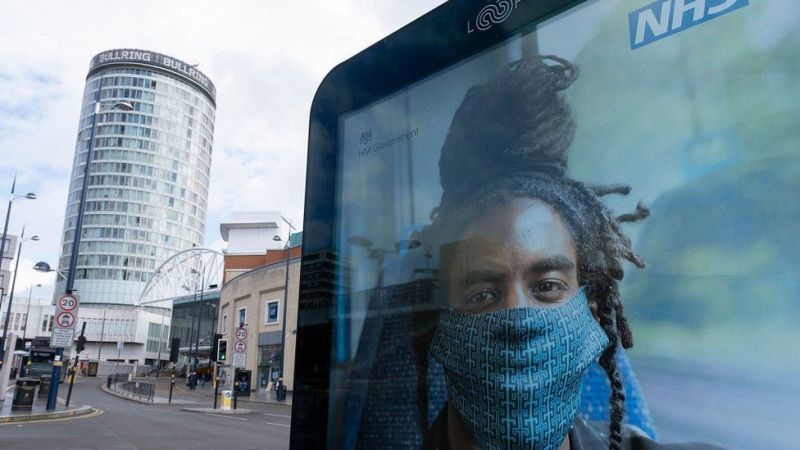 Barely a month into England's coronavirus vaccine programme, a stark inequality began to reveal itself. Black people were less likely than any other group, and half as likely as white people, to have had the jab.

By April, 64% of black over-50s had been vaccinated compared with 93% of white people of the same age.

The reasons for this are complex. Unethical medical treatment in the past, ongoing discrimination and personal experiences of insensitive treatment by the NHS are all believed to play a part.

But doctors, researchers and campaigners who spoke to the BBC said they feared black communities were being blamed.

'Look at the reasons why'

Heather Nelson, chief executive of the Black Health Initiative, said this blame had resulted in her charity receiving abusive calls and emails, some using the most offensive racial slurs targeted at black people after reports of a local outbreak of coronavirus.

"Rather than blaming the black community for not having the vaccines, let's look at the reasons why," Ms Nelson said.

She believes trust - or lack of it - is the most important thing holding back people. Actor and comedian Sir Lenny Henry, in an NHS campaign video, emphasised this point, saying he knew it was "hard to trust some institutions and authorities".

But to find out more she has teamed up with York St John University to survey people on their reasons for not having had the vaccine.

One of the most commonly cited unethical medical trials targeting black people, the Tuskegee Syphilis Study in the US which ran from 1932-1972, actually involved withholding treatment from hundreds of men, despite an effective drug - penicillin - being available. This resulted in many preventable deaths.

It was mentioned by many of the people spoken to for this article, but it's hard to say how much it has influenced people in the UK.

Instead, Dr Sandra Husbands, director of public health for the London Borough of Hackney, said black African people in her area highlighted more recent trials in African countries, which had produced a mistrust of pharmaceutical companies.

In one example from 1996, 11 children in Nigeria died and dozens were left with disabilities after having an experimental meningitis drug tested on them.
"That history doesn't disappear," said Dr Gurch Randhawa, a professor of diversity in public health at the University of Bedfordshire. He added that more recent events like the Windrush scandal had further damaged people's trust in authorities.

This is despite the fact black communities have consistently had the lowest Covid-19 vaccine coverage, and this trend was already known from previous vaccination campaigns.

It is known from other public health initiatives that take-up increases when they are delivered through local community and faith organisations.

The government teamed up with mosques and temples, but some feel connections with black churches were made more slowly.

Guidance was circulated fact-checking the false idea there was pork in the vaccine, to support Muslim and Jewish people of all races. But a belief held by some African evangelical Christians that the vaccine could be a sign of the apocalypse - based on a description of the "mark of the beast" from the Book of Revelation - went largely unnoticed.
The wording of the New Testament text suggests at the end times, no-one will be able to "buy or sell" unless they bear this mark (which people are associating with taking the vaccine and being allowed extra freedoms) - but once they accept it, they will not be able to go to heaven.

In some cases, evangelical churches preached against taking the jab, Dr Husbands said.

Dr Randhawa also suggested the NHS may not yet have strong partnerships with black African community groups - the least vaccinated of all - which are generally newer to the UK than Caribbean communities.

Fear of being used as 'guinea pigs'

When the spotlight of attention has been turned on black communities by the authorities, Ms Nelson says, it has often been negative, for example, the use of stop and search by the police.

So people are asking why they are being focused on now, she said - "they felt they were being used as guinea pigs".

Although it was discussed as one of the criteria early on, ethnicity was not in fact used to prioritise people for the vaccine. In the end, the government focused on age, occupation and health conditions.

But the conversation around it, along with the memory of historical trials where people were experimented on, may have led to a misperception that black people were being targeted with the vaccine, according to Dr Husbands.

This was fuelled by misinformation spreading online, some claiming the vaccine is a ploy to eradicate black people.

As time has gone on, the fear of being a guinea pig has lessened, said Evelyn Akoto, public health leader for the London borough of Southwark, which has one of the biggest black communities in the country. So many people in the wider population have been vaccinated, that it has become clear no single group is a target.

But that fear meant many people waited, watching to see other people be vaccinated before they felt confident it was safe - all the while risking being exposed to illness.

The York researchers described the paradox of black people being both most likely to catch and die of Covid, and least likely to have the vaccine which could protect against it.

"Fear is highly motivational to not do something - it's a powerful driver of avoidance strategies. People who have heart attacks often fear exercise afterwards even though it will help them, because they fear uncertainty," Prof Andrew Hill, of York St John, says.

While the conversation has mainly focused on people being reluctant to have the vaccine, in some cases they may simply be struggling to access it, Ms Akoto said.

Some people will be more hesitant if they have to travel outside their area to a big vaccine hub that's unfamiliar to them, especially if they are already nervous. So Southwark, like many areas around the country, is using vaccine vans and pop-up clinics in mosques and churches to reach people in a familiar location.

In one session, a number of people were vaccinated who had never been registered with a GP, and so may not have received an invitation.

As a result, she said, the borough had one of the biggest increases in take-up in London between February and March

And across England, vaccine coverage has risen from 48% to 74% in black over-80s between February and April, compared with an increase from 82% to 97% in white people of the same age.

As the country moves into the next phase of its vaccine programme, this serves as an important reminder.

The problem may be complex - but it's not incurable.