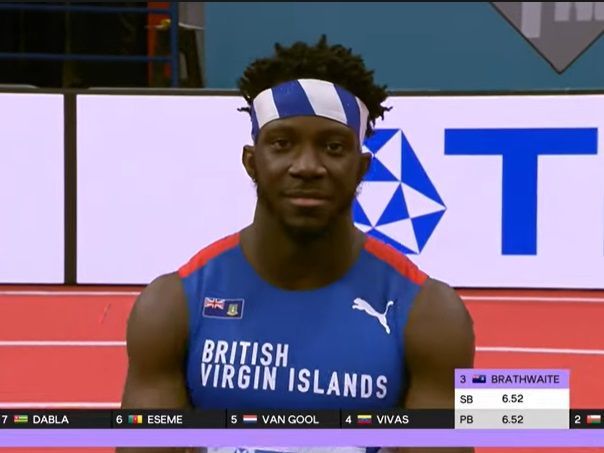 Virgin Islander and 2022 NCAA Silver Medallist in the 60M, Rikkoi A.R. Brathwaite’s appearance at the World Indoor Championships in Belgrade, Serbia came to an expected end on Saturday, March 19, 2022.

Running in Heat 6 out of Lane 2, Brathwaite placed second in 6.66 seconds, behind Guyanese Travis Collins (6.66 secs), to automatically qualify for the semi-finals.

Brathwaite’s Personal Best in the 60M is 6.52 seconds.

It would; however, be the one and only appearance for Brathwaite at the Championships, as he was missing from the semi-final races. 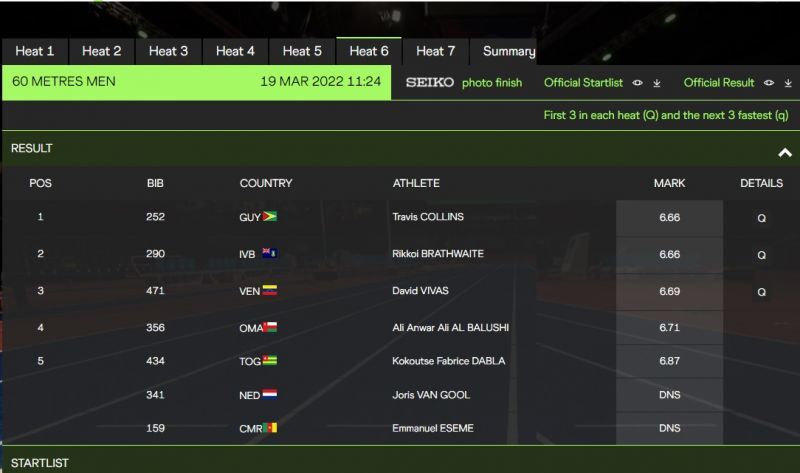 Running in Heat 6 out of Lane 2, Rikkoi A.R. Brathwaite placed second in 6.66 seconds, behind Guyanese Travis Collins (6.66 secs), to automatically qualify for the semi-finals.

Brathwaite’s mother, Ayana S. Hull later later posted on Facebook that Brathwaite had related of hamstring concerns and the decision was made to take the side of caution and have Brathwaite discontinue competing in Serbia.

“During his qualifying heat for the semifinals in the 60m this morning, Rikkoi felt some slight discomfort in his hamstring (“at about the 30 metre mark” he said). Although he finished the race and still qualified to the semifinals, a decision was made to pull him from the remainder of the competition.”

Hull added that the decision brings an end to Brathwaite’s indoor season. “Needless to say, he is heartbroken and sad but it’s for the best and to ensure he gets and remains healthy for the long outdoor season ahead.”

The 27-year-old did it in dramatic style, drawing on all of the strength, speed endurance, and killer long jumper’s stride that took him to surprise Olympic gold in Tokyo in 9.80 to catch the US pair and defending champion Christian Coleman and Marvin Bracy and snatch victory on the dip by the slenderest of margins in a European record of 6.41.