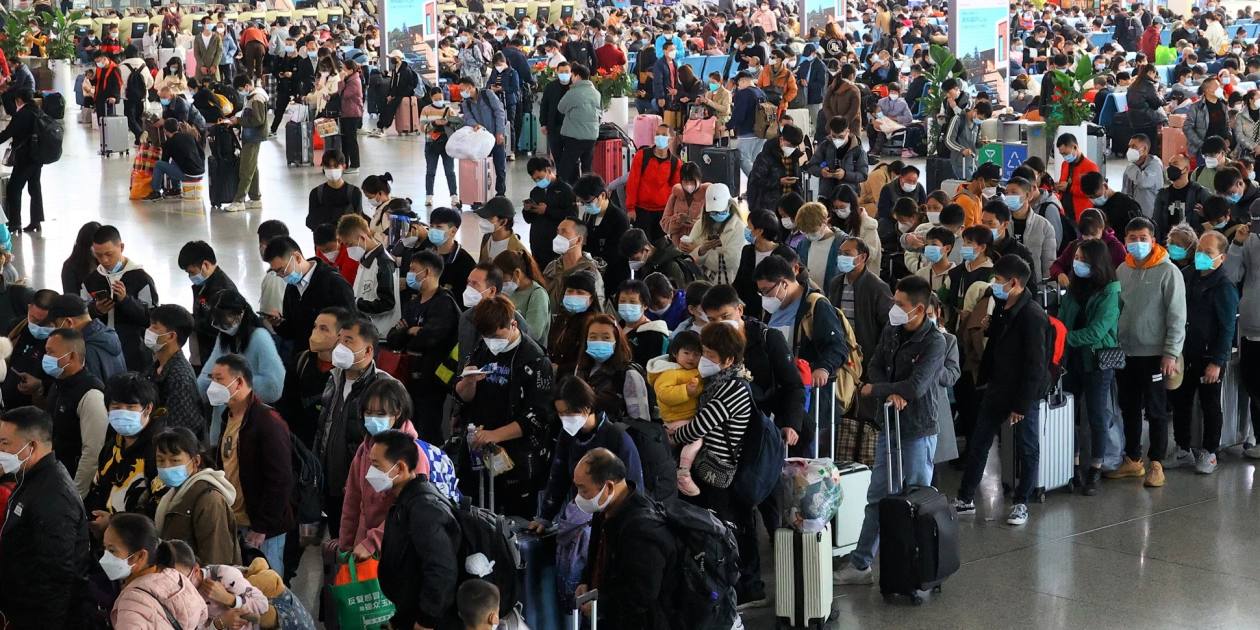 Listen to the article
0:00
0:00
Lunar New Year travel will nearly double to 2.095 billion trips this season, Chinese transportation authorities said Friday, after the country all but abolished zero-COVID restrictions last month. Nation readies for first holiday in four years without limits on movements.
This year's holiday will run for seven days through Jan. 27. Rail and other networks have prepared to serve the crush of travelers for a 40-day period starting Saturday.

The estimated number of passenger trips, released by the Ministry of Transport, would mark a recovery to 70% of the holiday traffic seen in the pre-pandemic year of 2019.

China's surge in COVID-19 cases appears to be easing in some large cities, but the outbreak is far from over. Concerns linger that the travel rush will spread the disease to smaller cities and rural areas.

Migrant workers typically use the Lunar New Year holiday to travel home for family reunions. On Friday, a train station in Guangzhou that serves long-haul trips was thronged with passengers lugging large suitcases.

"My parents at home and I have already recovered from COVID," said a man who gave his surname as Lu and was on the way to visit family in southern China's Guangxi region. "There's nothing to worry about, so we'll get together with relatives."

Overseas trips are expected to climb as well from the zero-COVID lows of last year. The number of travel reservations for the week through Jan. 27 is more than six times that of the Lunar New Year holiday of 2022, according to Chinese booking site Trip.com Group. The most popular destination is Australia, followed by Thailand and Japan.

The Chinese government pave the way for the first Lunar New Year holiday in four years without major travel restrictions when it with announced a major rollback of zero-COVID rules last month.

This reversal followed protests in November where people in Beijing, Shanghai and beyond held up blank sheets of white paper and called for an end to the restrictive measures, which included lockdowns and mass testing.

The economic fallout added to the resentment of the zero-COVID policy. Gross domestic product is believed to have grown by about 3% in real terms in 2022 -- well short of the government's target of around 5.5%. The deteriorating labor market has left a growing number of young people without work.

But as the containment policy eased, COVID-19 flared up in big cities. According to estimates by regional authorities and medical professionals, 80% of Beijing residents had a history of infection at the end of the year. The ratios are 70% for Shanghai and about 64% for the inland province of Sichuan.

U.K. health analytics firm Airfinity pegged daily infections at 2.5 million and daily deaths at 16,600 in China forecasts updated Friday, up from more than 1 million and over 5,000 in a Dec. 21 forecast.

Airfinity predicts that China's cumulative deaths from COVID-19 since Dec. 1 will reach 1.7 million by the end of April, up from more than 209,000 in Friday's numbers.

Beijing and other big cities have been seeing people move about in greater numbers since late last month. In 18 large cities, the volume of subway passengers at the end of the year had bounced back to 60% of the level seen at the same period in 2019, according to Chinese brokerage Haitong Securities.

Nearly all Seven-Eleven convenience stores in Beijing were operating normally as of Monday. In December, 60 stores, or about 20% of the total in the Chinese capital, had to close temporarily as workers called in sick. Customer traffic is recovering, too, said a representative from Seven-Eleven's parent company, Japan's Seven & i Holdings.