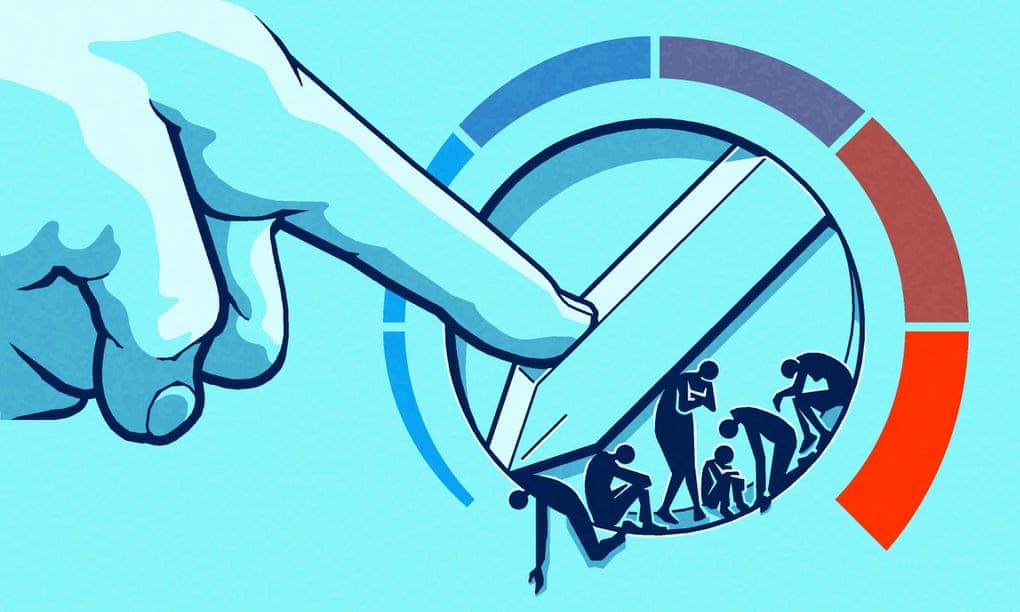 ‘Cost of living crisis’? No – this is a social emergency that will define who we are

Too many people remain outside the political conversation and vulnerable to the meanest kind of policies.
Lexie lives in rural north Wales. She is disabled, and her husband recently lost his job in the building trade. The heating and hot water in their council house is oil-fired, and the price of 500 litres of fuel has just gone up from £235 to £480. They have also just found out that their annual electricity costs are rising from £1,851.15 to £2,564.33. Their four sons are aged from eight to 18. They have not put their home’s radiators on since last November.

I first wrote about Lexie – not her real name, but the one she has used to write diary entries for a research project called Covid Realities – in January. Around 10 days ago, we had another conversation. She talked about squeezing multiple meals from the cheapest of ingredients (she had somehow managed to get five dinners out of a bag of 11 frozen chicken pieces), washing with hot water boiled on the stove, and the endless financial traps that she and her family now have to try to somehow avoid.

Lexie has a mobility vehicle provided as part of her disability benefits, but the soaring cost of diesel means it has to be mostly used for the school run. Of late, her husband has been offered a few job interviews, but found that the impossible cost of travel has ruled them out: local public transport is thin on the ground, and anyway, the nearest bus stop is two miles from their house. Visits to the supermarket have to be carefully rationed, but that means buying basic goods from the local convenience store, where everything is more expensive. Lexie worries most, she says, about her youngest child, who has asthma. His coughing fits are sometimes so bad that he vomits. “It’s because he’s cold,” she told me. “I know it is. But there’s nothing I can do. I can’t pull heat out of the air.”

The kind of want and hurt Lexie’s family are suffering may sound as if it places them on the edges of society. The truth is that there are millions of British people like them, and those numbers are increasing fast. A stark metric is the UK’s level of absolute poverty, which is defined as being a household income less than 60% of the median income level of 2010-11, adjusted for inflation – a measure that usually goes up only in times of recession. The Resolution Foundation forecasts that over the next year, the fall in real incomes means another 1.3 million people in the UK – including 500,000 children – will be pushed into this category, taking the total number to 12.5 million.

Has the scale of this social emergency sunk in yet? Last Friday was the day when the costs of some of life’s most basic elements – from gas and electricity to social housing rents – shot up, way beyond a 3.1% increase in benefits. As the cost of food continues to rise, energy bills are set to go up again in the autumn. Continuing cuts to local services, accelerated by inflation, mean that the last-ditch help so many people need – children’s social care, advice on housing and debt, and so much more – is in a more parlous state than ever. As Lexie’s experiences show, almost a third of disabled people live in poverty, an aspect of the story that gets far too little attention. Abstractions such as “the cost of living crisis” do not do enough justice to 2022’s mounting sense of dread; neither does the cliched view of people having to choose between heating and eating, when a lot of people will soon be unable to afford either.

Across the country, this weekend saw protests against yet another economic calamity being loaded on to the poorest people, and there will be more to come. The government, meanwhile, seems split between indifference and paralysed panic. Though Rishi Sunak’s spring statement offered no meaningful action at all, the backlash that followed it saw speculation about help that may belatedly arrive as things get even worse. But Conservative politics is still largely locked into that grim narrative that splits people into workers and mere claimants, even though the sheer number of lives turned upside down by rising living costs is undermining its twisted logic. Labour has unquestionably good intentions, but also tends to stick to a script centred on “working families”, presumably for fear of scaring the swing voters it sees as being judgmental about so-called welfare. That leaves too many people outside the political conversation and vulnerable to the meanest kind of policies.

One thing we rarely talk about is when and how basic hardship began to become so inescapable. In the much-maligned 1970s, when trade unions were strong and the welfare state was entering its last years as a dependable safety net, income and wealth inequality were at an all-time low – and though poverty was an issue, it had yet to be allowed to run rampant. Then came the reinvention of Conservatism under Margaret Thatcher. In 1979, about 13% of children lived in relative poverty; by 1992, the figure was 29%. It consistently declined under New Labour, before increasing again after 2010. Thanks to David Cameron and George Osborne, rhetoric about “welfare” reached a new nadir, and policy followed the same trajectory. At the same time, the kind of precarious work that locks people into poverty was allowed to hugely increase. The basic story was plain enough: the UK was once again being pulled away from any lingering affinities with European-style social democracy towards the market-driven individualism of the US, and the idea that poverty is either best ignored, or thought of as a failure of character.

But there has always been a pull in the opposite direction, towards solidarity and collectivism rooted not so much in ideology as in basic morals. Beyond Westminster, that view of things is now evident in the wider culture, thanks to such voices as the footballer Marcus Rashford and the cook and anti-poverty campaigner Jack Monroe. Public opinion seems to have shifted, thanks partly to the pandemic having acquainted more people with the benefits system and highlighted glaring inequalities. In the annual British Social Attitudes survey of 2011, 77% agreed that benefits for the unemployed were “too high and discouraged people from finding a job”, as against the idea that they were “too low and caused hardship”. But in the latest survey, that figure had dropped to 45% – the first time since 2000 that it had been the less popular of the two views. This, perhaps, highlights why Sunak’s indifference became a much bigger talking point than he had bargained for.

In the midst of yet another crisis, we are about to find out who we now are: either the mean, hard-faced country many politicians still believe in, or a society moving in a more compassionate direction. Who will decide? I wonder about Tory MPs who represent newly acquired seats in Labour’s old heartlands, whose constituency caseloads must increasingly be full of real hardship; there must also be plenty of voters who have long thought of themselves as sitting well away from poorer parts of the population, but are now seeing such distinctions fall away. Therein lies both a grim kind of hope and yet another injustice – because the people who should surely have the loudest voices are those who have been suffering for years and are now facing a level of want that is almost beyond words.
#Covid
Add Comment