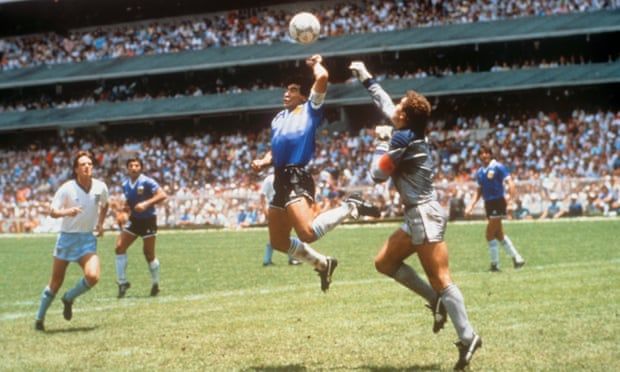 The shirt worn by Diego Maradona when he scored twice – including the “hand of God” goal – to knock England out of the 1986 World Cup has sold for a record-breaking £7.1m at auction.

The late Argentinian player described his opening goal in the quarter-final as “a little with the head of Maradona and a little with the hand of God”. He and the England goalkeeper Peter Shilton leapt to reach the ball, which touched Maradona’s left hand and bounced into the net. The referee did not have a clear view and allowed the goal to stand.

Minutes later, Maradona dribbled past a host of England players to score again, a strike that was voted goal of the century in a 2002 poll of 340,000 fans in 150 countries. Argentina went on to win the tournament.

The shirt has been owned for the past 35 years by Steve Hodge, the England midfielder who unintentionally flicked the ball to Maradona for the handball goal. The two players swapped shirts at the end of the game.

It has spent the last 20 years on loan at the National Football Museum in Manchester, and went under the hammer at Sotheby’s on Wednesday afternoon, fetching £7,142,500, a new auction record for an item of sports memorabilia. The buyer was not identified. 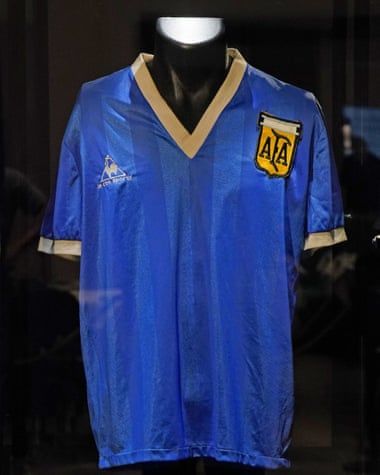 The shirt on display at Sotheby’s in London.

Sotheby’s described the blue No 10 jersey on its website as in “good overall condition consistent with heavy use, perspiration and athletic activity” with “slight de-threading on hemming on the front bottom of shirt, and minor spots throughout”.

Brahm Wachter, Sotheby’s head of streetwear and modern collectibles, said: “This historic shirt is a tangible reminder of an important moment not only in the history of sports but in the history of the 20th century.

“In the weeks since we announced the auction we have been inundated by sports fans and collectors alike, with a palpable excitement in the air for the duration of the public exhibition – and this unfiltered enthusiasm was echoed in the bidding. This is arguably the most coveted football shirt to ever come to auction, and so it is fitting that it now holds the auction record for any object of its kind.”

Hodge said the shirt had “deep cultural meaning to the football world, the people of Argentina and the people of England.” He added: “It was an absolute privilege to have played against one of the greatest and most magnificent football players of all time.”

The game came four years after the UK had defeated Argentina in the Falklands war and took on great significance for both countries as a result. In his autobiography, Maradona – who died in November 2020 at the age of 60 – said: “It was like beating a country, not a football team.”

Sotheby’s had estimated that the shirt would sell for at least £4m. The previous auction record for sports memorabilia was set by an original autographed manuscript of the Olympic manifesto from 1892, sold at Sotheby’s for $8.8m (£7.05m at today’s exchange rate) in 2019.

Ordinary but significant items sold for record amounts at auction

*  The last violin played on the Titanic was sold at auction for $1.7m in less than 10 minutes in 2013. The instrument belonged to Wallace Hartley, an English musician whose eight-piece band played as the ship sank into the frozen waters of the Atlantic in April 1912. According to reports, Hartley’s body was pulled from the water days afterwards with his violin case still strapped to his back.

*  John Lennon’s flowered porcelain toilet sold for almost $15,000 (£9,500) – about 10 times the estimate – in 2010. The toilet came from Tittenhurst Park, an English estate owned by Lennon and Yoko Ono, where the former Beatle recorded his Imagine album and film. When Lennon had the toilet replaced, he told builders to “put some flowers on it or something”. Sale organisers called it the most unusual item they had ever handled.

*  An oak chair that JK Rowling used while writing the first two books of the Harry Potter series sold for $394,000 (£278,000) in 2016. The 1930s chair was one of four mismatched chairs given free to the then little-known writer for her council flat in Edinburgh. Before she donated it for auction in aid of the NSPCC in 2002, Rowling painted on the chair: “You may not/find me pretty/but don’t judge/on what you see.”

*  Marilyn Monroe’s white halter dress that she wore in the 1955 film The Seven Year Itch sold for $4.6m in 2011. “Oh, do you feel the breeze from the subway? Isn’t it delicious?” Monroe famously says in the film as the dress is blown up by air from a New York subway grate. That image become one of the most memorable in film history. The dress was designed by William Travilla and made from rayon-acetate to give it sharp pleats.

*  A copy of the Bible used by Elvis Presley sold for £59,000 in 2012. A pair of Presley’s unwashed and soiled underpants worn underneath his famous white jumpsuit during a 1977 concert performance went unsold after bids failed to meet the £7,000 reserve price.

*  False teeth belonging to Winston Churchill were sold for £15,200 in 2010. The upper dentures, one of several sets made for the wartime prime minister, were specially constructed to preserve his natural lisp and were so important to him that he carried two pairs at all times. They were designed to be loose-fitting so that Churchill could preserve the diction famous from his radio broadcasts during the second world war.