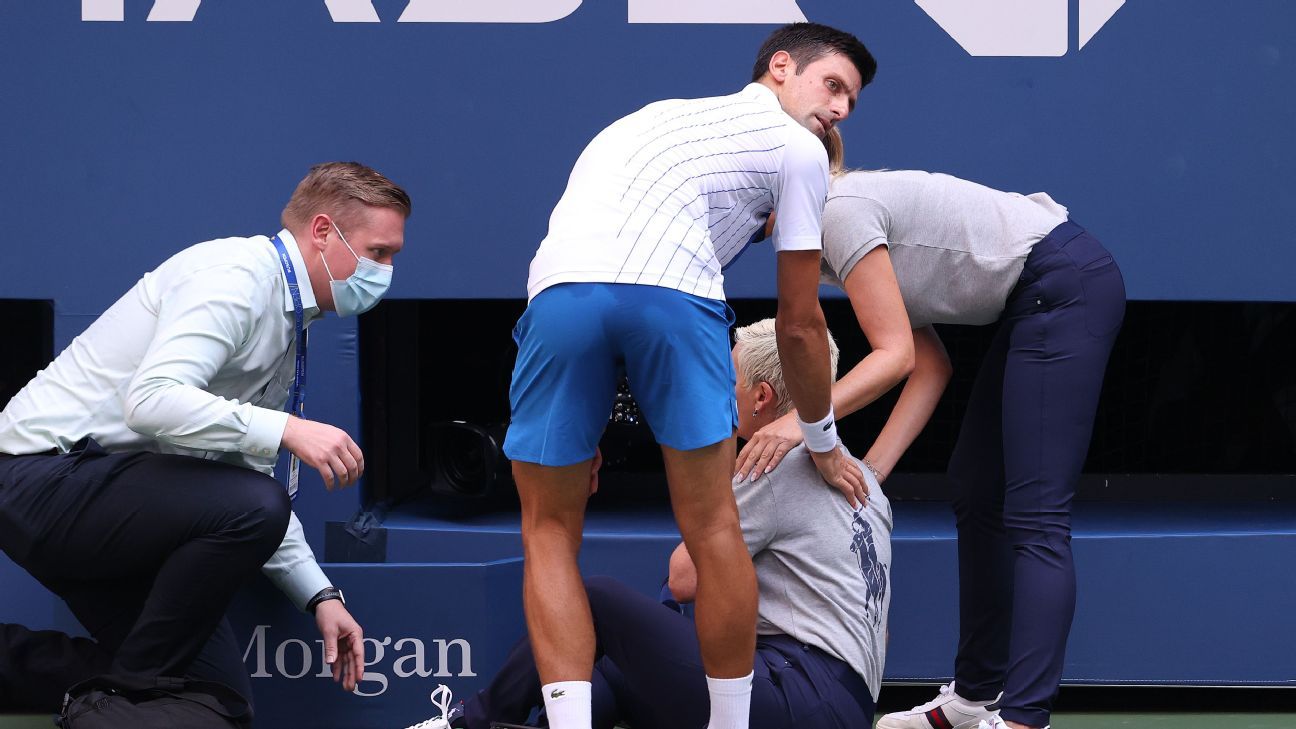 Djokovic out of US Open after hitting line judge

Top-seeded Novak Djokovic was defaulted from his fourth-round match Sunday at the US Open after a tennis ball he hit in anger struck a line judge in the neck.

As he walked to the Arthur Ashe Stadium sideline for a changeover, trailing Pablo Carreno Busta 6-5 in the first set, Djokovic -- who was seeded and ranked No. 1 and an overwhelming favorite for the championship -- angrily smacked a ball behind him. The ball flew right at the line judge, who dropped to her knees at the back of the court and reached for her neck.

During a discussion of about 10 minutes near the net involving chair umpire Aurelie Tourte, tournament referee Soeren Friemel and Grand Slam supervisor Andreas Egli, Djokovic appeared to be pleading his case. Eventually, he walked over to shake hands with Carreno Busta.

Tourte then announced that Djokovic was defaulted, the tennis equivalent of an ejection.

Djokovic left the tournament grounds without speaking to the media. In an Instagram post, he apologized to the line judge, saying that he didn't intend to hit her and is going to "turn all this into a lesson for my growth and evolution as a player and human being."

Asked whether Djokovic should have been allowed to continue to play, Carreno Busta shrugged and replied, "Well, the rules are the rules. ... The referee and the supervisor [did] the right thing, but it's not easy to do it."

Indeed, the United States Tennis Association issued a statement saying that Friemel defaulted Djokovic "in accordance with the Grand Slam rulebook, following his actions of intentionally hitting a ball dangerously or recklessly within the court or hitting a ball with negligent disregard of the consequences."

The USTA went on to say that Djokovic forfeits the ranking points and $250,000 in prize money that he earned in the tournament, "in addition to any or all fines levied with respect to the offending incident."

"Novak was angry. He hit the ball recklessly, angrily back. And taking everything into consideration, there was no discretion involved," Friemel said. "Defaulting a player at a Grand Slam is a very important, very tough decision. And for that reason, it doesn't matter if it's on Ashe, if it's No. 1, or any other player on any other court, you need to get it right.''

Friemel also confirmed that Djokovic now faces a $10,000 fine for the incident, and that Djokovic's intent was taken into consideration when it came to the fine. Had Djokovic intended to injure the line judge, the penalty would have been harsher, Friemel said.

"We would have done the same decision on any other court with any other player," he added.

Djokovic will likely face an additional fine for not attending his post-match news conference after he left the grounds of the USTA Billie Jean King National Tennis Center without taking questions.

This was the latest example of Djokovic finding himself at the center of the tennis world for a reason other than his best-in-the-game returns, can't-miss groundstrokes and body-contorting defensive prowess.

Djokovic tested positive for the coronavirus -- as did his wife, one of his coaches and other players -- after participating in a series of exhibition matches with zero social distancing that he organized in Serbia and Croatia in June. Then, on the eve of the US Open, he helped establish a new association he says will represent men's tennis players.

And, of course, there's been his dominance on the court.

Djokovic began the day 26-0 this season, with an unbeaten run that extended to his last three matches of 2019. He had won five of the past seven Grand Slam tournaments to raise his total to 17, closing in on rivals Roger Federer -- who has a men's-record 20 -- and Rafael Nadal, who has 19.

With reigning US Open champion Nadal, who cited concerns about traveling amid the coronavirus pandemic, and Federer, sidelined after two knee operations, not in the field, the 33-year-old Djokovic was expected to claim a fourth trophy in New York.

It all came apart suddenly Sunday, even if it appeared that Djokovic did not intend to hit the line judge. He wasn't looking in her direction when his racket made contact with the ball, and there was concern on his face as soon as he realized what had happened.

Players who hit a ball out of anger and make contact with an on-court official have been defaulted in the past. In 2017, for example, Denis Shapovalov -- a 21-year-old Canadian scheduled to play his fourth-round match on Sunday -- was defaulted from a Davis Cup match against Britain when he accidentally hit the chair umpire in the face with a ball.

At Wimbledon in 1995, Tim Henman hit a ball into the head of a ball girl and was defaulted from a doubles match.

"I think the supervisors and all them are just doing their job, but very unlucky for Novak," said Alexander Zverev, the No. 5 seed who reached the quarterfinals by winning Sunday. "If it would have landed anywhere else -- we're talking a few inches -- he would have been fine."

Among the many oddities about the 2020 US Open, the first Grand Slam tournament since the onset of the pandemic, is that there are no spectators.

Another is that only the two largest arenas -- Ashe and Louis Armstrong Stadium -- have full complements of line judges making calls at matches. At other courts, chair umpires are aided by an electronic line-calling system.

Djokovic's mood had soured over the preceding few minutes Sunday. In the prior game, he wasted three consecutive break points, and after the last, which Carreno Busta won with a drop shot, Djokovic whacked a ball off a courtside advertising sign.

Then, on the second point of what would become the last game at this year's US Open for Djokovic, he stumbled while chasing a shot and fell to the ground, clutching his left shoulder.

Play was delayed for a few minutes while a trainer checked on him.

That's when Djokovic got himself into trouble.

His departure means there is no man left in the field who has won a Grand Slam singles title. Whoever emerges as champion will be the first first-time major trophy winner in men's tennis since 2014, when Marin Cilic won the US Open.

Each of the past 13 Grand Slam trophies has been won by a member of the big three of Federer, Nadal and Djokovic.

Since the start of 2005, the big three have won 52 of the 61 majors. The most recent major in which no member of the Big Three was among the four semifinalists was the 2004 French Open.