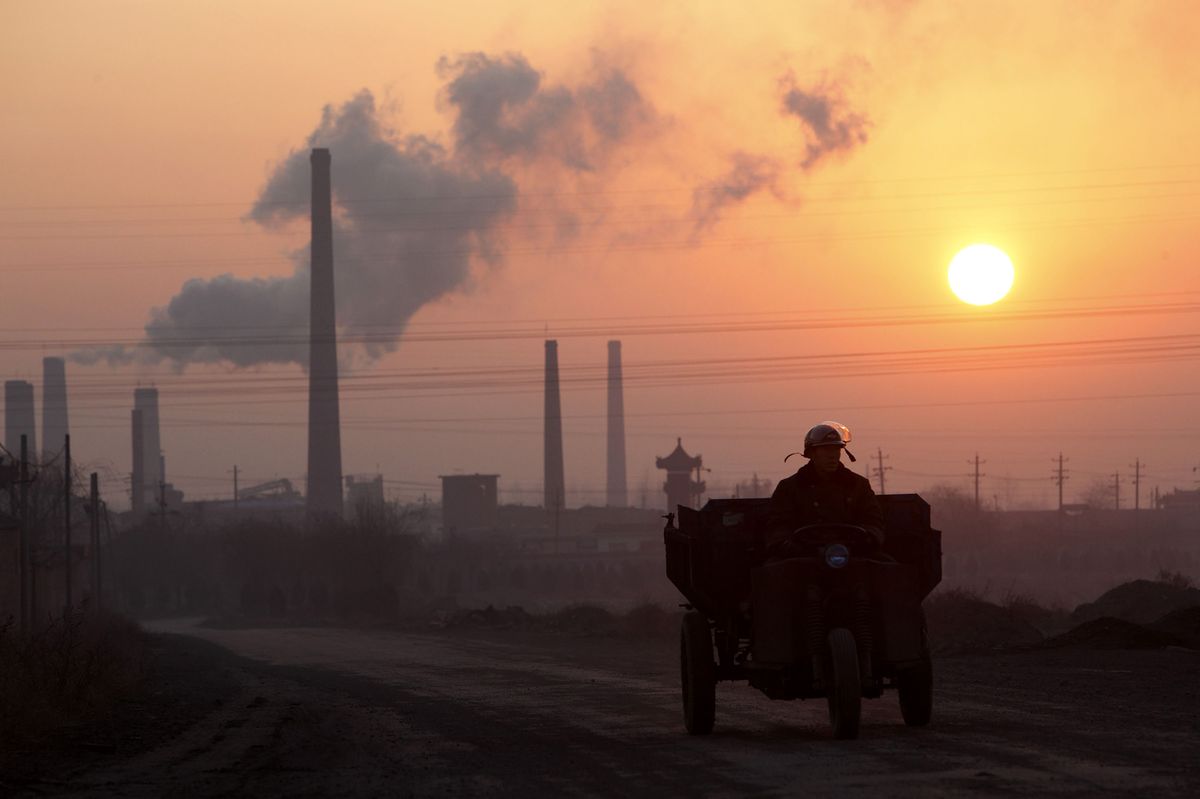 Emerging markets are heading toward the end of the third quarter with more reasons to be cautious than optimistic.

Developing-nation stocks, currencies and bonds had their worst week in the five days through Friday since the coronavirus pandemic rocked global markets in March. The gap between implied volatility in emerging-market currencies and their Group-of-Seven peers is at the widest since June amid concerns over renewed lockdown measures and delays to further U.S. fiscal stimulus.

Manufacturing reports from China, India, Brazil and South Africa that are being published this week are potentially less decisive for investors than the global sentiment toward risky assets. Investors are bracing for higher price swings around the U.S. November elections, with the first presidential debate between Donald Trump and challenger Joe Biden scheduled for Tuesday. 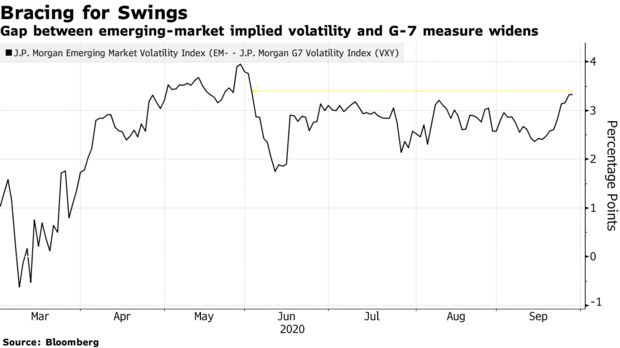 And they’re being encouraged to move to the sidelines. Deutsche Bank AG is taking a “more defensive stance” on emerging-market credit as it expects increased volatility from the U.S. election to fuel a selloff in risky assets. Never mind that the wave of central-bank stimulus and investors’ hunger for yield had lifted developing-nation dollar debt for five months.

Goldman Sachs Group Inc. is asking investors to put their money into high-yielding currencies, such as the Mexican peso, the South African rand and Russian ruble, but only “once the dust settles.” Expectations for swings in the those currencies against the greenback rose by the most among peers last week.

“With the broad dollar still volatile, and risks still in focus, it is likely too early to engage in fresh longs,” Goldman Sachs strategists, including New York-based Zach Pandl, wrote in a note.

Central banks in India and the Philippines are both forecast to keep interest rates on hold Thursday, as they balance the need for additional stimulus against a backdrop of rising market volatility. Turkey and Hungary unexpectedly increased borrowing costs last week to support their weakening currencies.

* Elevated inflationary pressures are likely to constrain the ability of the Reserve Bank of India to ease policy, according to Bernard Aw, principal economist at IHS Markit in Singapore. “We expect the central bank to continue to boost liquidity through other measures, such as cutting the cash reserve ratio,” he wrote in a research note
* The Philippine central bank may lower its benchmark by another 25 basis points, though it’s more likely to move in November or even later to have more impact as the economy reopens more fully, Citigroup Inc. economists including Johanna Chua in Hong Kong wrote in a report
* The Philippine peso is the best-performing emerging-market currency this year, gaining 4.5%, while the Indian rupee has fallen 3%
* Ghana will probably hold its key rate on Monday after the economy contracted less than forecast in the second quarter
* Kenya will also likely keep its interest rates unchanged on Tuesday, while policy makers in Angola will decide on Monday

* On Monday, Colombia’s central bank will release the minutes of its Sept. 25 meeting, when it cut the benchmark rate by a quarter point to 1.75%
* Urban unemployment figures for August, to be released on Wednesday, will probably show that after spiking earlier in the year, the jobless rate has stabilized

* China will release manufacturing numbers on Wednesday that are expected to show the nation’s economic recovery extended into September. The Caixin gauge of manufacturing is due the same day
* Profits at Chinese industrial enterprises grew for a fourth consecutive month, as the country’s factories maintained momentum following the pandemic shutdown
* The yuan has strengthened more than 3% this quarter, beating all its Asian peers
* South Korea will publish industrial production figures on Tuesday and trade data two days later. Exports are likely to see an annual gain in September, the first since the pandemic struck, but that will mainly reflect a higher number of working days rather than improving underling momentum, according to Bloomberg Economics
* The won is the top-performing EM currency after the yuan over the past month
* Malaysia will announce trade data on Monday, while Thailand will publish the same figures on Wednesday along with its current-account balance. Indonesia reports inflation data on Thursday
* Vietnam will report a slew of data on Tuesday, including gross domestic product and retail sales. The economy is one of the few in the region expected to avoid a contraction this year, according to the Asian Development Bank
* Data on Tuesday will probably show South Africa’s unemployment rate surged to a new record in the second quarter as lockdown restrictions forced many businesses to cut jobs to save costs, or close permanently
* The rand was the worst performer among peers last week after the Mexican peso
* Lebanon’s prime minister-designate stepped down on Saturday after failing to form a government, leaving the nation rudderless as it struggles to recover from a devastating explosion at its main port last month
* Saad Hariri, Lebanon’s former premier close to Saudi Arabia, said he won’t be a candidate to form a new government
* The nation’s Eurobonds gained 1.9% this month, the top performer in emerging markets after debt sold by Suriname and Malaysia, according to Bloomberg Barclays indexes
* In Argentina, investors will monitor the release of July economic activity for insight into how social distancing measures, capital controls and debt negotiations affected production. Government tax revenue data for September will be released on Friday
* Markets will continue to react to the imposition of tighter capital controls
* Chile is set to post August unemployment, retail sales and copper production figures on Wednesday as the economy starts to recover from the worst of the pandemic-driven recession. Thursday’s release of economic activity for August will complete the list of growth indicators
* Chile’s peso outperformed all of its emerging-market peers this quarter
* Brazil’s primary budget balance figures, expected on Wednesday, will probably show another month deep in the red, according to Bloomberg Economics. A positive reading of August industrial production data on Friday could help boost optimism for growth