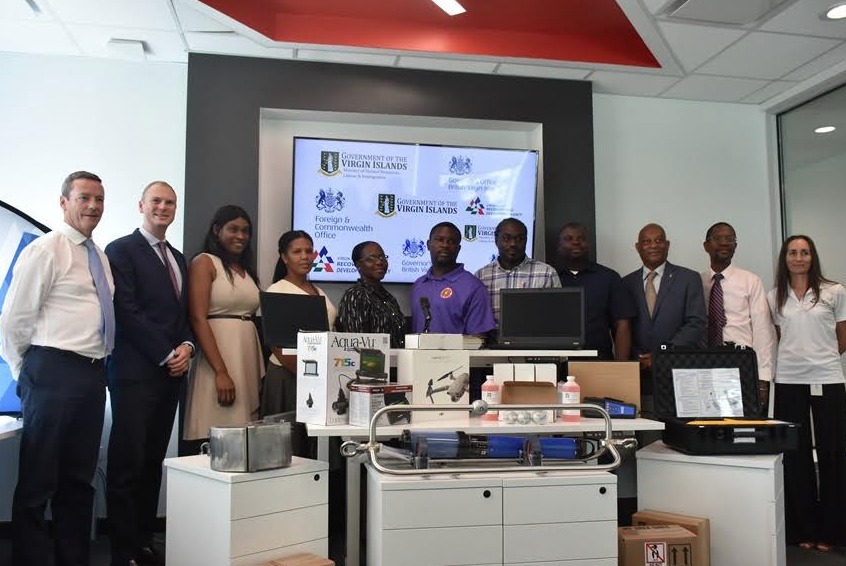 Six departments across government will now have access to maritime equipment which will be used to conduct marine surveys as the territory moves towards developing a blue (ocean resources) economy.

The equipment is part of an overall capacity building initiative which is a joint partnership between the Recovery and Development Agency (RDA), the United Kingdom’s Foreign & Commonwealth Office (FCO) and the Ministry of Natural Resource and Labour.

Speaking at the handing over ceremony at the RDA’s head office on Friday, February 7, Minister of Natural Resources & Labour, Vincent Wheatley, referred to the occasion as a ‘red-letter’ day for the BVI environment.

“This is one of the first times we have ever seen it to this scale where a company came in, they not only came in did the study and left, but they made sure they trained locals here across six departments, that these guys can now have the equipment to even go beyond what the training has taught them, to create something very different to the way it started,” Minister Wheatley stated.

“We have now moved beyond the rhetoric and we are going into action. I think this project epitomises what partnerships are really all about,” he added.

Minister Wheatley further stressed on the significance of the territory now possessing this equipment, as it aligns with his government’s goal to have the BVI the centre of marine studies in the Caribbean region.

“So, anybody that wants to do any impact studies of their development, this equipment here, lets us do that. What we are hoping to achieve in the long run, is to make the BVI a centre of excellence in marine survey studies,” Minister Wheatley further explained.

Project a gem turned into a national strategy

Meanwhile, Governor Augustus Jaspert said the project was about supporting the bigger ambition of thinking through how the BVI develops as a territory.

He added: “It is wonderful when a little gem of a project actually turns into a national strategy … Always, the Recovery and Development Agency works best when it is able to work very effectively with the ministries, and this is what we have seen in this example.”

In the meantime, RDA’s Chief Executive Officer Paul Bayly said he was thrilled to have collaborated with the agencies involved, and thanked the FCO for contributing more than half the value of the project total.

Also playing a major role in the project is Deputy Secretary in the Ministry of Natural Resources and Labour Joseph Smith-Abbot.

He said the handing over of the equipment to trained staff is phase two of a three-phase project and explained in-depth how the equipment will be put to work.

“The thematic areas that are covered under that include but are not limited to the actual determination of the bathymetry, in other words, the depth in contouring of our seafloor, the determination of water chemistry and how do you then go about characterising underwater habitats to then provide the basic layer of information,” Smith-Abbot stated.

“That will enable us to better understand the marine resource base, to understand change over time and to then harness that capacity to develop new industries and augment industries already established,” he added.

The six ministries which were trained by UK’s National Oceanography Centre during phase one of the project include the Ministry of Natural Resources & Labour’s Environment Unit, the Agriculture & Fisheries Department, the National Parks Trust, the Town & Country Planning Department, Survey Department and the Virgin Islands Shipping Registry.
Add Comment