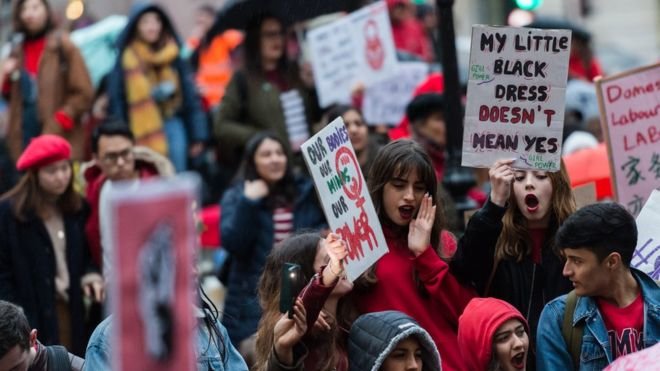 "Have confidence, come forward," the director of public prosecutions has told victims of rape, as the number of prosecutions continues to fall.

Max Hill QC, DPP for England and Wales, said it was so important they have confidence their case will be taken seriously and get personal attention.

His appeal comes as the CPS starts to publish statistics quarterly, instead of yearly, in a drive for transparency.

But concerns have been raised that such changes make it harder to scrutinise.

Kate Ellis, a solicitor at the Centre for Women's Justice, said the introduction of quarterly figures made it difficult to compare statistics against previous annual figures.

Max Hill accepted there was some complexity in the figures but insisted he wanted to make them available to people more frequently.

He said the prosecution of rape was a high priority for him and a decision to charge someone was not made because it "fitted a certain statistic".

"We don't charge cases because we are trying to hit a target of convictions," he told BBC News.

"We aim to charge the right person with the right offence every time - and we apply the same test to every case, whether it's rape or some other form of crime.

"And if the evidence is there to charge the case and it's in the public interest to charge it - we will charge it," he said.

And the newly-released quarterly statistics seem to back up the continuing fall in prosecutions.

However, these new figures did show a slight increase in the number of suspects being charged - up from 1,758 to 1,783 over the same period.

The increase in the amount of evidence involved, from phones and social media, has made rape cases more difficult for police, prosecutors and, potentially, victims.

Kate Ellis said she had heard complainants and police officers say they were reluctant to refer often compelling cases to the CPS because it was "so reluctant to bring charges".

She said the police were thinking "what's the point?" or seeking early advice from the CPS and then not referring the case.

Dame Vera Baird, the Victims Commissioner for England and Wales, has written to the attorney general calling for an independent inquiry into the falling charge and prosecution rates over the past two years.

She writes that a key issue would be examining the role the CPS has played in the drop.

Dame Vera said in her travels around the country talking to victims and care professionals, she has commonly heard that prosecutors has become risk averse and is critical of a report by the CPS Inspectorate, published in December, which found it was not.

In response, the Attorney General's Office said the attorney general would meet victims' groups to discuss their concerns.

Deputy Chief Constable Sarah Crew, the National Police Chiefs' Council lead for rape, said the current outcomes were not good enough and everyone involved in investigating and prosecuting rape knew there was more to be done.

She said an ongoing cross-government review was looking at why victims did not feel able to engage with police, why referrals to the CPS from police were down, and why the number of CPS charges had fallen.

Once the reasons were understood, real and lasting improvements could be made, she added.

FRONTLINE
An inside look at how Amazon CEO Jeff Bezos built one of the largest and most influential economic forces in the world - and the cost of Amazon’s convenience.
British Virgin Islands
BVI
Caribbeans
World
Business
Tourism
Add Your News
×