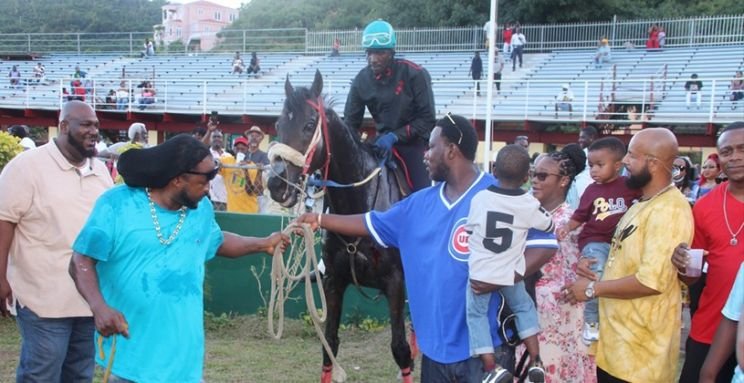 Hundreds of fans, decked in their Sunday’s best, flocked to the Ellis Thomas Downs on Sunday, December 27 2020, to witness the resurgence of the beloved horse racing sport.
The sport, which, like many others, had been affected by the COVID-19 pandemic, got underway for the first time officially, under the ambit of the VI Horse Owners Association, with Moonlight Bandit bagging the feature race.

Moonlight Bandit ran against One Way to Fame from Mission House Racing Stables in the Hon. Julian Fraser Classic.

“We raced before and he lost and all that, but through the pandemic, he get a good rest and then the guys decide let we just keep a little race. I tell them I’m going to beat them this time,” said Dion Stevens, the beaming owner of Moonlight Bandit.

Meanwhile, in the first race, which was called the Bob and Letty Hodge Sprint Classic, Nadiaes Image from Top Priority Racing Stables won.

It competed against Uncle Mace from Mission House Racing Stables.

The second race of the day, which was dubbed the K & J Trucking Classic was scratched.

VI Horse Owners Association Lesmore Smith stated that the day was a good one, and was pleased that the fans turned up to support the sport. He is hoping that 2021 will be a better year for the association with more races.

When asked when fans can expect another event, Smith said: “I would say for Easter, we are going to probably going to have something before our Easter, which is our next celebration.”

He also said he hopes to have more local horses take part as the pandemic is keeping the US Virgin Islands horses at bay.

Fans were also given an unexpected treat, with two donkeys, nearly stealing the show.

Smith said, due to the low number of horses participating in the races, they opted to include the donkeys as an ‘added attraction to make people feel free, to laugh and enjoy the moment.”

The donkeys had their owners playing catch up when they dumped their riders to the ground and ran away, to the enjoyment of spectators.

The event was held under the theme: “Keeping hope, culture and faith for 2021 in the BVI alive.”

According to Smith, because of financial constraints, there were no purses for the races. He said the horse owners would receive some form of compensation, from proceeds from the gate.
#COVID-19  #Covid
Add Comment