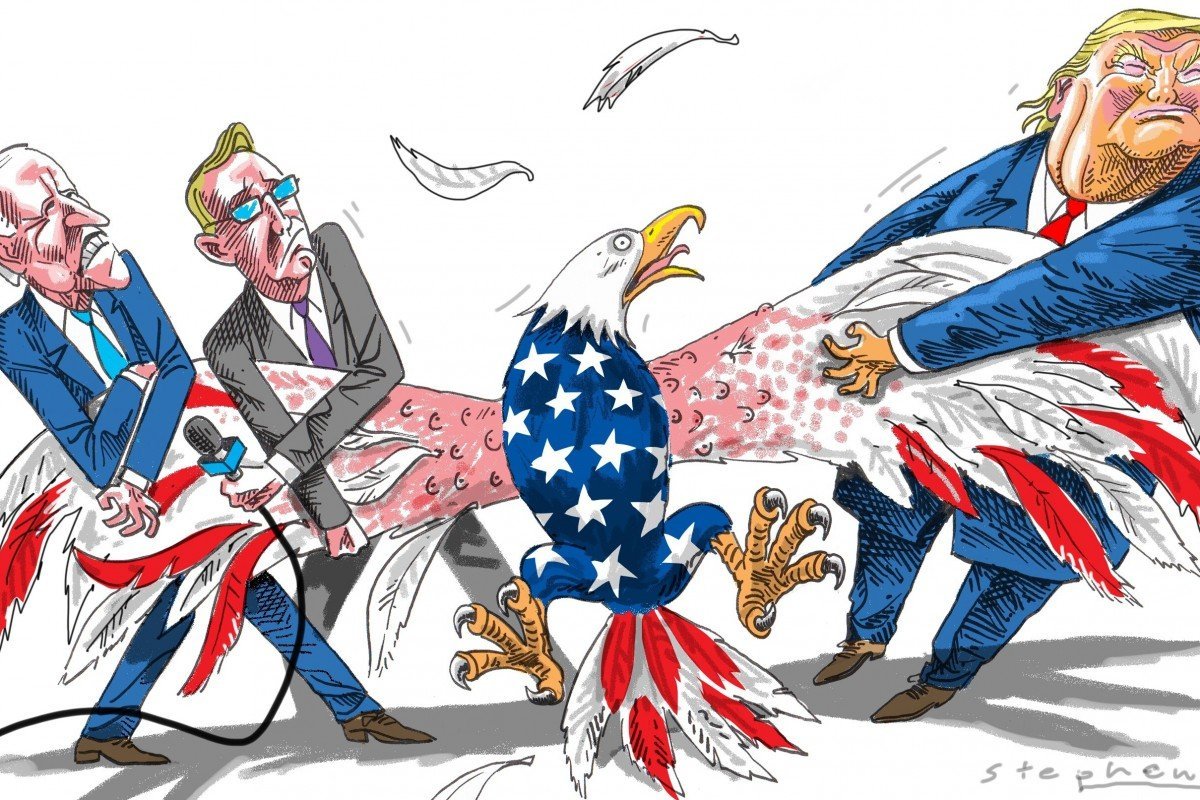 In 2016, we thought US democracy couldn’t sink any lower. How wrong we were

Four years on, US democracy is plumbing new depths and divisions are more entrenched. How will it end? Media bias has gone from bad to worse, as both sides fight to attract a bigger audience. Meanwhile, the US president can’t stop his trash talk and unite the country against a virus that has killed 200,000 Americans
Four years ago, we all saw the lows that American democracy was plumbing as we approached the 2016 presidential election. We had two candidates on offer, “in a battle to finish second-to-last in two centuries of presidential candidates”. Even worse, the US news media was self-destructing, giving up something money can’t buy – its integrity – to help their chosen one win. I concluded that “we look ridiculous, and America’s rivals in Beijing hope we keep it up”.

We did a lot more than keep it up. What politicians and the media on both sides have done to American institutions for the past four years has been much worse for the country – and for democracy everywhere – than the candidates they foisted on voters in 2016.

After Donald Trump was elected president, cries were heard from apoplectic Democrats to “resist”, conjuring up images of gallant French freedom fighters trying to rid themselves of the Nazis. This was an early indication that nothing would be off-limits in running Trump out of office.

Most of the US media fight the Democrats’ corner, and have done so with the zeal of suicide bombers. That’s not an inapt analogy, given the damage they’ve done to the fourth estate by frequently abandoning facts and fairness on all things Trump. For four years, Americans have been fed a steady diet of “news” and “analysis” about how Trump is an illegitimate president and other unpleasant things. It’s ongoing.

Meanwhile, the Democrats are threatening (or promising, depending on your point of view) to wage all-out war on institutions that keep the US government in check if they take power. They talk of abolishing the Electoral College, stacking the Supreme Court, eliminating the filibuster, giving automatic citizenship to millions of illegal immigrants and giving statehood to Washington DC and Puerto Rico. The effect of the latter two changes would probably add millions more Democrats and four more Senate seats to cement the overhaul. Because of Trump.

The Republicans and the media in their corner aren’t much better, though as more of what transpired in 2016 and 2017 comes to light, a significant claim they’ve been making seems to be gaining merit.

There is a fair body of evidence gathering that the Obama administration set the FBI on Trump during his 2016 campaign, then kicked things into desperate overdrive during the interregnum. A Federal Bureau of Investigation attorney who worked on the Trump-Russia investigation pleaded guilty last month to a federal charge of making a false statement to support an FBI application to secure a surveillance warrant against a Trump campaign adviser.

The lawyer’s instant messages seemed to indicate a lack of impartiality among the FBI team investigating Trump, including one he wrote that read: “Viva le resistance.” A criminal investigation into the origins of the Trump-Russia investigation is ongoing.

If this is news to you, it could be because the Democratic-leaning media doesn’t care much for the story. The bias on both sides went from bad to worse over the past four years, as the media discovered that selling bias and divisiveness attracts more readers and revenue than selling boring old news.

Intelligent Americans often swallow whole what they’re fed by the media, especially those favoured by the so-called elite. Newspapers like The New York Times gained the public’s trust through mostly factual reporting for 150 years. And Trump is so loathed that “news” which confirms Trump haters’ beliefs – no matter how extreme – doesn’t trigger the scepticism that might otherwise make smart people stop and think about whether he’s really, say, on the payroll of the Kremlin.

Who knows, maybe he is. But the entirety of the Republican Party would have to be in on it for not a single one to stand up and do his or her patriotic duty.
Four years after an election that the Democrats and their media still say was rigged, the news is once again filled with stories about how the “Russians!” (or the “Chinese!”) are going to hack the election . The Democrats have essentially announced that if Trump wins, it will be because he stole the election (again!).

The Democrats are already preparing to contest this year’s election results. They have gone so far as to war-game a scenario in which Trump bars the doors of the White House after he loses.

This may be a better strategy than traditional campaigning, because the sight of Joe Biden trying to get through a speech makes you want to avert your eyes. If he were running for president of your local Pinochle club, you might consider giving him a sympathy vote.

But he’s running for president of the United States – leader of the free world, and all that – and it’s horrifying for half the country to think that enough people might pull the lever or mail in their votes to send him to the White House. The other half feel the same about Trump.

I’d like to say it’s astonishing that the Democrats, with four years to prepare, ended up with a candidate who is more flawed than the one they had in 2016. But nothing really astonishes me any more. Depressing is more like it.

As if the world weren’t in enough turmoil, the one country that kept order globally for 70 years can’t even keep order at home right now. Cities burn while their mayors kneel to “peaceful” protesters and talk about defunding the police. The president can’t bring himself to stop his trash talk and unite the country in a fight against a disease that has killed 200,000
.
A Supreme Court justice’s reported dying wish was that the Republican president and Senate would ignore the constitution; if Republicans instead follow the constitution, a former CNN host tweeted that “we burn the entire f***ing thing down” and a New York Times columnist tweeted that “people gotta take to the streets”.

So, here we go again. Pretty much every American friend I have agrees that what’s happening is a bad thing for the country, but they’re split right down the ugly middle about whose fault it is. It’s hard to see how that will end.
#Donald Trump  #Joe Biden