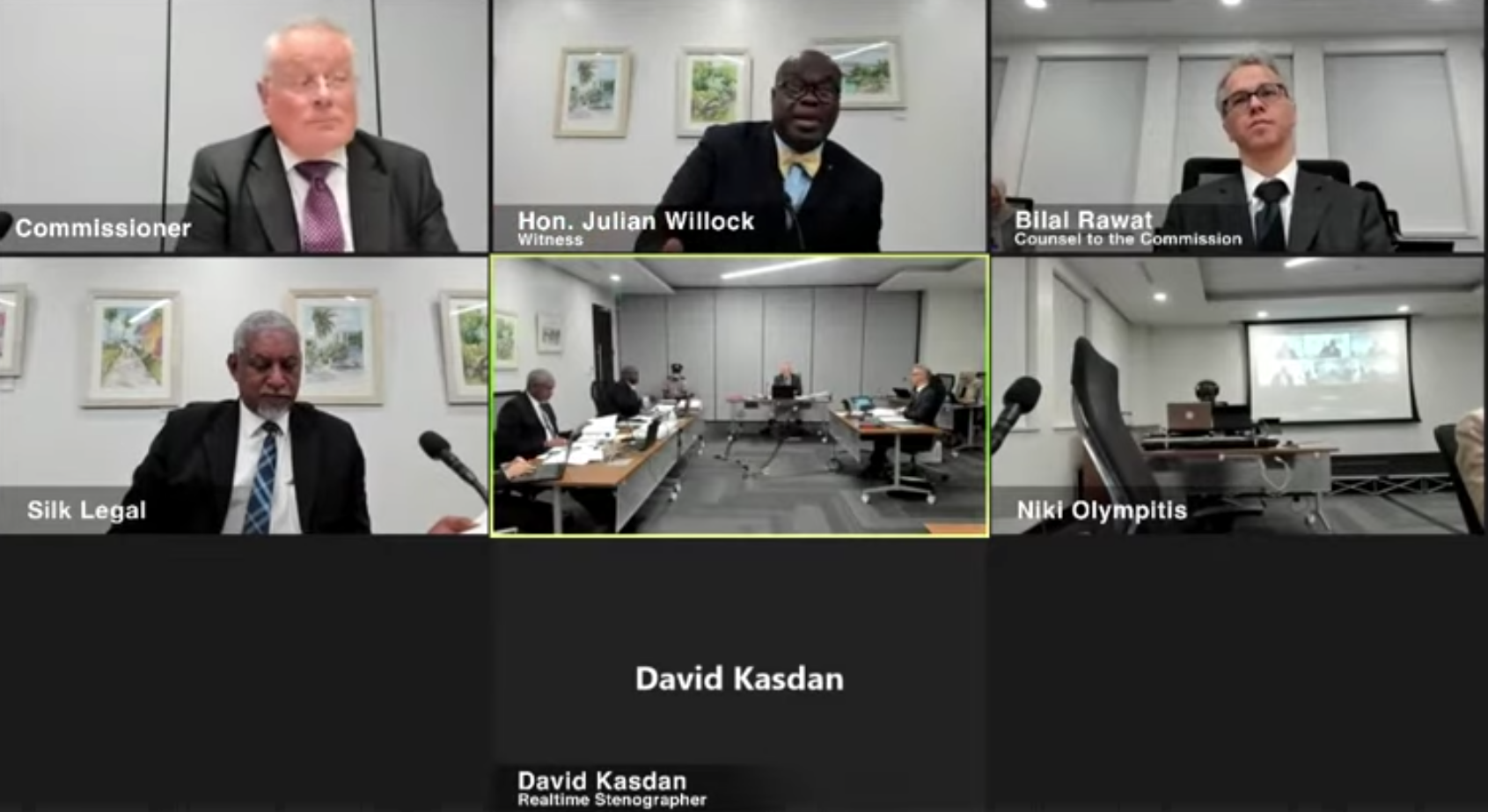 Lone Commissioner, British Queens Counsel Sir Gary Hickinbottom, turned red in the face during the 12 October, 2021 hearing in the Commission of Inquiry (COI) into Governance in the British Virgin Islands (BVI), as the Territory’s Premier, Honourable Andrew A. Fahie, listed the alleged transgressions of the current Boris Johnson-led Conservative Government in their management of COVID-19 procurement and high priority status given to contractors linked to UK Government officials.

The session focused on the processes and implementation of a package of BVI Government programmes valued US$22.5 million to small businesses, farmers, fishermen, schools, churches and other sectors, for economic stimulation during the pandemic.

Calling for equity and parity, the Premier raised the UK Government’s track record, which is documented in the February 2021 42nd Report of Session 2019–21 of the House of Commons (HOC) Public Accounts Committee Report (PAC) entitled, “COVID-19: Government procurement and supply of Personal Protective Equipment”, asking whether this was the benchmark of performance that should guide or be expected of a BVI Government, and whether this was the standard by which the BVI would be judged in the COI.

According to the report, Fahie stated, the UK Government, in July 2020, issued 8,000 contracts for goods and services worth £18 billion. Some 6,900 of those contracts, totalling £12 billion, were for building a four-month stockpile of Personal Protective Equipment (PPE). It included supporting new UK manufacturers that had not previously made PPE.

However, there was a major transparency issue as more than half of the contracts awarded before the end of July 2020 with a value over £25,000 were not published by 10 November, 2020 as required under the UK policies, and only 25 percent were published on Contracts Finder within the government’s target of 90 days, the report noted.

Further, even though the UK Government’s buying team received over 15,000 offers to supply PPE, it set up a parallel supply chain with a “high-priority lane”, which “did not include organisations with expertise in the health and social care sector that had existing relationships with suppliers through their members or directly and were well-placed to assess the credibility of potential PPE suppliers.”

The UK PAC report went on to cite apparent nepotism, as Fahie highlighted, “The Cabinet Office confirmed that of the 47 suppliers which came through the high-priority lane and were awarded contracts, 12 were introduced from MPs, seven from Peers and 18 from officials. In five cases, the source of the referral was not known and one referral was put in the lane in error.”

Fahie said there was an apparent “feeding frenzy” in the so-called VIP Lane, as the UK department ordered 32 billion items of PPE, which, based on the rate of usage between March and July 2020, could last five years, 15 times in excess of the needs for a four-month stockpile as targeted in the UK Government’s policy.

Making matters worse, the HOC PAC found, based on the evidence, that 195 million items of PPE was “potentially unsuitable for their intended purpose”, resulting in the wastage of hundreds of millions of pounds of UK taxpayers’ money.

The Committee alleged abuse of emergency procurement regulations by the UK Government “to very quickly make direct awards of contracts” to the tune of more than £10 billion without competition, and this “opened up significant procurement risks, including increased risks of unequal treatment of suppliers and poor procurement processes.”

*Racial Discrimination*
Equally concerning was the hint of racial discrimination, Fahie said, as the report found: “Black, Asian and minority ethnic (BAME) staff were more likely to report experiencing PPE shortages, feeling pressured to work without adequate protection, and not being fit tested for respirator masks. A third of BAME doctors reported experiencing PPE shortages compared with 14 percent of white doctors. Similarly, almost half of BAME nurses said that they had not been fit tested for respirator masks compared with 74 percent of white nurses.”

“This is the standard that we in the Virgin Islands are supposed to look up to as role models. This is the standard that is looking to keep us in check,” the BVI Premier queried, as he noted that senior UK Government officials went to the HOC and triggered a media blitz claiming extreme concern about the state of Good Governance in the BVI. The statements, Fahie said, had unjustly tarnished the BVI’s reputation.

Foreign Secretary, Mr Dominic Raab was one such senior UK Minister, who, in announcing the COI to the HOC on 18 January, 2020, made “allegations that funds set aside for struggling families during the pandemic may have been reallocated to political allies,” and expressed “concerns around spending on Government contracts [in the BVI] without any proper procurement process.”

Noting that it was against the backdrop of what was exposed by the HOC PAC report PM Johnson was called upon to issue a COI into the UK Government performance during the COVID-19, but Johnson refused, telling the UK Parliament on 12 May, 2021, that the time was not appropriate for a COI, because the UK Government needed to focus on the pandemic, the impact of COVID-19 on the UK economy and job loss, and that people were dying and loved ones were in grief.

Just like in the UK, the Premier said, the BVI Government faced challenges due to COVID-19 pressures and had to employ extraordinary and innovative measures to quickly address the situation on the ground. As with the UK Government, “certain administrative steps which would normally have been done at the front end [had to be left] to be dealt with in the back end.”

“But was there blatant corruption in the BVI’s COVID-19 economic stimulus programme as we have seen revealed occurring in the UK with the Conservative Government’s VIP Lane/Fast Track where party supporters and financiers have gotten preferred access to billions of dollars in Government contracts in areas where they have zero background or experience? The answer is No.” Fahie declared, as he called for equity of treatment with the UK for the BVI.

“Of whom is the BVI supposed to pattern and set our Good Governance Benchmarks and Standards? And against whose standards and benchmarks is the BVI’s Governance going to be measured? If it is the UK’s, then I can tell you that we have no VIP Lane/Fast Track for party supporters in our Governance system as any official policy. So therefore, if it is the UK standard, then the BVI would have exceeded those standards by several thousand percentage points,” he said.

The Premier also highlighted the UK’s bounce back loan programme where “the UK Government understood that speed was a priority and exceptional measures posed risks that had to be borne to serve the greater good,” as departments had relaxed the normal controls and checks to get the funds into the hands of the public quickly. This “materially increased the risk of fraud and error.”

The scheme has been described as a “giant bonfire of public money”, and the UK Office for Budget Responsibility in the UK has predicted losses to fraud and defaulting loans in the range of £22 billion to £40 billion, Fahie stated.

Further, the Premier pointed out, the Chancellor of the Exchequer had advised the HOC that the Government would deliberately relinquish ordinary controls, and, “There will be no forward-looking tests of business viability; no complex eligibility criteria; just a simple, quick, standard form for businesses to fill in.”

Referring to the UK Government, Fahie stated: “But they call a COI in the BVI – the same entities, and they send your learned fine self and your high-powered team, Commissioner with due respect, to grill, perceived as embarrass in some quarters, deflate and distract our humble, hard working public officers whose deficiencies, to the extent there are any, emanate from the UK’s failure to help with their professional development and that of the BVI Public Service, as they agreed to do in 2012.”

Fahie added that when the pandemic began, he wrote several letters to the then Governor Augustus Jaspert, some copied to the then Minister of the Overseas Territories Baroness Liz Sugg and PM Johnson, appealing for various forms of assistance for the BVI people. The response, he said, in his own paraphrase was that “the UK’s money is for UK taxpayers and the Virgin Islands people must fend for themselves.”

Now that the BVI Government have successfully taken care of the people’s needs and protected the economy with their own limited resources, “and we have seen for ourselves the strength, ability and resilience of the Virgin Islands people to take care of themselves,” he said, “the UK comes to undermine the self-confidence of Virgin Islands people in their own by poking holes in what we have done through a couple of small projects that have helped to keep our people out of destitution, while turning a blind eye to the UK’s own rampant, institutionalized and systemic corruption.”
Notwithstanding this, the Premier said he and his Government would continue to cooperate with the COI because they believe a transparent COI with a just outcome could benefit the Territory.

Hickenbottom dismissed Fahie’s points as political rhetoric, which the Commissioner deemed irrelevant and of no use to his terms of reference as COI Commissioner.