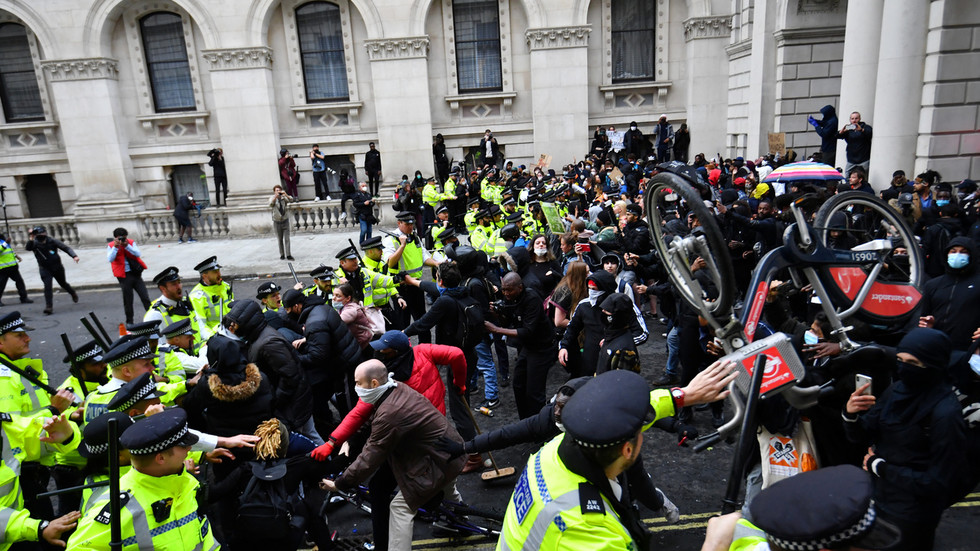 The UK government reportedly ordered courts to treat unruly protesters, rioters, and vandals to “24-hour justice,” calling on magistrates to “fast-track” their legal proceedings amid ongoing demonstrations over police brutality.

Justice Secretary Robert Buckland instructed the courts to extend their working hours and expedite cases linked to the protests, according to the Times newspaper. Buckland urged court officials to model their approach on the response to the 2011 London riots, which also saw fast-tracked proceedings and heavier sentences.

THE TIMES: violent protesters to be jailed within 24 hours #TomorrowsPapersToday pic.twitter.com/kmI8qr8LhY

Under the plan, coordinated with Interior Minister Priti Patel, those committing acts of vandalism, arson, or assaults on police will be jailed within 24 hours of their arrest to “diffuse disorder.”

The move comes amid warnings of further unrest, with the chairman of the UK’s National Police Chiefs’ Council, Martin Hewitt, saying both the protests and the fallout from Covid-19 could produce a “challenging period in relation to violence and disorder.”

Widespread demonstrations were kicked off in late May by the death of George Floyd, an unarmed black man killed in police custody. Though the protests began in Minneapolis, Minnesota, they have since spread to all 50 US states and beyond, sparking similar anti-racism and police brutality actions in more than a dozen other countries. To date, a number of demonstrations in the UK have boiled over into violence, seeing protesters clash with riot police, pelting officers with bottles and fireworks.