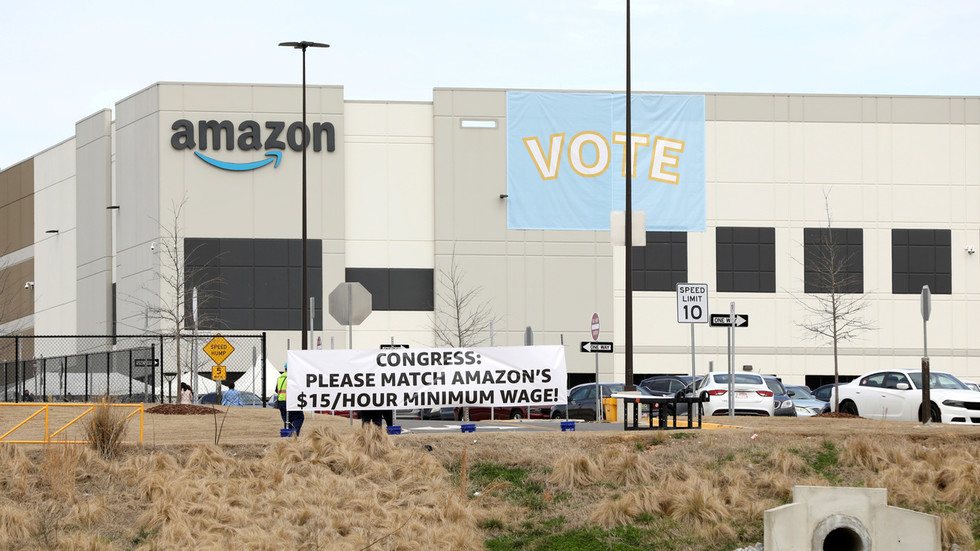 Amazon is in the lead amid a push to unionize one of its Alabama warehouses, with around 1,100 workers voting ‘No’ on the proposal so far, more than double those backing it, as the union claims the company used “illegal” tactics.

Some 463 ‘Yes’ votes were recorded after ballot-counting ended on Thursday evening, far outpaced by the 1,100 in opposition, according to local media. While the count is set to resume on Friday morning, the organization at the center of the battle, the Retail, Wholesale & Department Store Union (RWDSU), has already voiced pessimism in the outcome, with its president all but acknowledging defeat while accusing the e-retail giant of misconduct.

“Our system is broken, Amazon took full advantage of that, and we will be calling on the labor board to hold Amazon accountable for its illegal and egregious behavior during the campaign. But make no mistake about it; this still represents an important moment for working people and their voices will be heard,” RWDSU head Stuart Appelbaum said in a statement.

The union has repeatedly condemned Amazon’s conduct during the voting process. It alleged that by placing a mailbox on-site at the Bessemer warehouse, the company gave the impression it would review the ballots itself and may have swayed workers’ votes. Amazon has denied pressuring the US Postal Service (USPS) to put the box there, and maintains it was meant to provide a “convenient, safe, and private [way] for our employees to vote on their way to and from work if they choose to.”

However, emails obtained by the Washington Post on Thursday indicate that Amazon did press the postal service to place a mailbox at the facility after all, with a USPS manager telling a colleague in January that the company wanted “to move quickly on this.” Another missive sent by the same manager six days later also notes that an unnamed employee at “Amazon HQ” wanted to be “kept in the loop” on the progress of the mailbox.

Appelbaum castigated the company over the revelation, saying that “Amazon felt it was above the law and worked with the postal service anyway” to install the mailbox, even after the National Labor Relations Board shot down a previous request to place a dropbox on location.

"They did this because it provided a clear ability to intimidate workers."

Overseen by the National Labor Relations Board, the vote to unionize Amazon’s Bessemer, Alabama fulfillment center is the first major drive of its kind since 2014, when workers overwhelmingly voted against unionizing a company warehouse in Delaware. Thursday marked the first day of ballot-counting in the current initiative, following mail-in voting that began in February.

Of nearly 6,000 employees at the Bessemer facility, only about 55% of the workers cast ballots, all by mail. A simple majority is needed to carry the day.

As the union fight drags on into a second day of vote-counting, Amazon has also come under fire for its efforts to block a shareholder proposal to audit the company’s handling of Covid-19 and measures it took to keep workers safe. Employees have alleged unsafe working conditions and lax policies amid the pandemic, with one worker fired after staging a protest over the issue last April. Nonetheless, the Securities and Exchange Commission has reportedly sided with Amazon on barring the safety audit, though a separate review of its civil rights and ‘racial equity’ practices was recently given the green light.