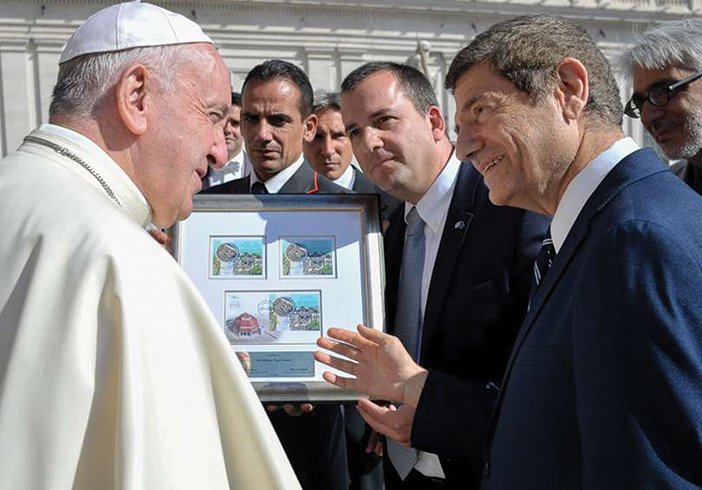 POPE FRANCIS is pictured here while receiving the joint stamp issue celebrating the 25th anniversary of Vatican – Israel diplomatic relations from Israel’s Ambassador to the Holy See, His Excellency Oren David who invited the Pontiff to visit Capernaum on the northern shore of the See of Galilee.

The Biblical fishermen village and Capernaum’ Synagogue (where Jesus preached and performed miracles) as well as St. Peter’s dwelling (on which later a Catholic church was built)  are depicted on the miniature sheet issued jointly by both nations. Except for Jerusalem, Capernaum is the place most mentioned in the Gospel. The Ambassador was accompanied by the Director of Israel’s Philatelic Service, Mr. Elhanan Shapira, while the Vatican’ Philatelic & Numismatic Bureau  was represented by its Chief Supervisor Mr. Mauro Olivieri and Bureau’s official Ms. Marica Fabris.