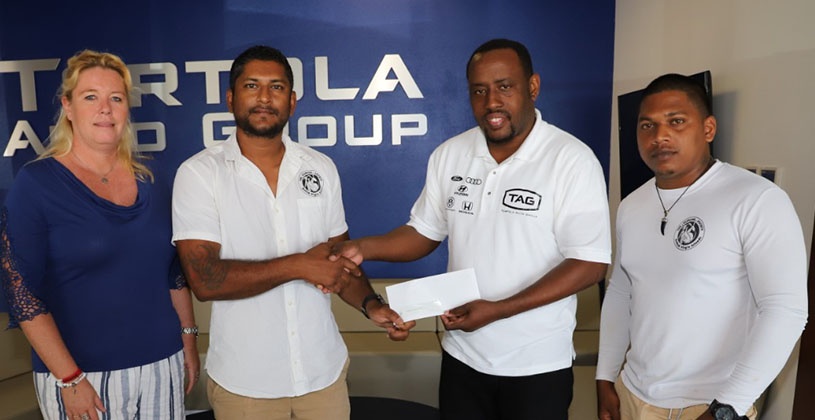 Tortola Auto Group, home of CarQuest Auto Parts, has presented the Humane Society of the BVI with proceeds from the company's winetasting event held in support of the construction of a new animal shelter on Tortola.
On Friday, January 24, TAG’s Senior Executive of Marketing and Sales, Gordon French presented a donation of $2,000 to Vijay Bissoondutt, Shelter Manager, during a ceremony at the company’s showroom.

Bissoondutt was accompanied by Els Kraakman, a member of the Humane Society's Board and Kemo Persaud, Shelter Assistant.

“Tortola Auto Group is today happy to present a cheque of $2,000 to the Humane Society of the BVI, which represents the proceeds from our winetasting event which was held on December 6 at our indoor showroom at Slaney Point,” French stated.

According to French, when information surfaced that the animal shelter was being evicted from its current location in the Johnson’s Ghut area and needed to find a new home, TAG immediately wanted to assist because of the important services offered at the shelter.

“We are happy that we received support for the winetasting from TICO and Caribbean Cellars, both of whom immediately jumped on board to offer their super amazing wines. We are also pleased that the community supported the event. We had in excess of 100 persons in our showroom. TAG also appreciates the support received from FLOW, NAGICO Insurances, Riteway Food Markets and ROMASCO,” French stated.

Bissoondutt thanked TAG for their unwavering support for the protection of animals in the Territory.

“On behalf of the BVI Humane Society and myself, I would like to say thank you very much to TAG and all the sponsors that made the 2019 winetasting event a great success,” Bissoondutt stated.

He added, “Thank you very much for your generous donation which will go straight towards the funding for the new shelter which will be located in Josiah’s Bay. We have been evicted from our present premises and we are trying to raise as much money as possible to start building the new shelter in Josiah’s bay.”

According to Bissoondutt, the Humane Society has set a target of $500,000 and has since raised $100,000 for the construction of the new shelter.

French said that since TAG opened in November, 2015, the Directors have made it their mission that the company will be deeply involved in the community, supporting initiatives that will assist in the overall development of the Virgin Islands.

“We are more than simply selling cars, providing auto parts and services, we are a community partner. TAG has worked with the Rotary clubs, BVI Cancer Society and other organisations in the community. Our affiliation with the Humane Society started over a year ago with support for their Gaming Night and then their popular annual dog show,” French stated
#the Virgin Islands
Add Comment