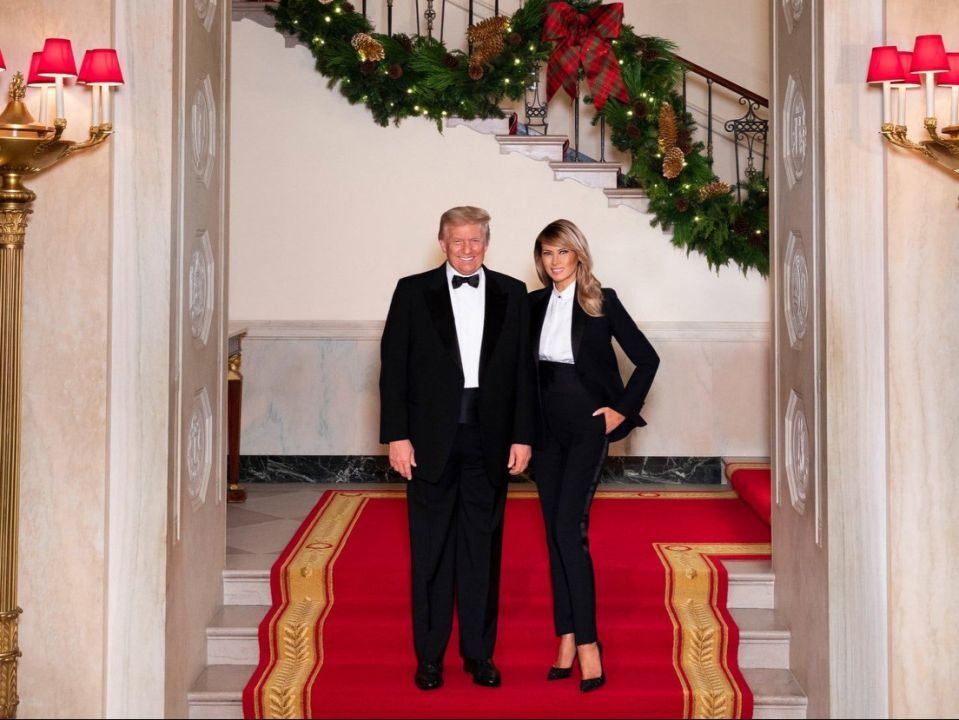 Was the Trump Christmas card photoshopped?

US first lady Melania Trump has been “accused” of photoshopping her and President Donald Trump’s official Christmas portrait. What’s wrong with photoshop? Every smart phone camera has filters to legitimately polish, sharpen and smooth pictures... Obama and his family using it, the queen of England and all her royals using it, and nothing wrong with that.

The photo is the couple’s last Christmas portrait as US president and first lady, as they are due to leave the White House on 20 January when President-elect Joe Biden is inaugurated, following Mr Trump’s loss in 3 November’s national election.

On Friday, Ms Trump shared the portrait on her Twitter account, which showed the couple wearing matching tuxedos in front of festive decorations.

“@realDonaldTrump & @FLOTUS are seen December 10, in their official 2020 Christmas portrait,on the Grand staircase of the White House in Washington, DC (Official White House Photo by Andrea Hanks),” she added.

However, soon after Ms Trump posted the portrait to Twitter, social media users began to question the authenticity of the photo, according to InStyle.

“What a lovely photo (shop). Was Donald lifted out of a photo from this same meeting?” Twitter user @FrankVerderosa replied, referencing a photo of Mr Trump at a dinner hosted for Prince Charles and Camilla, Duchess of Cornwall at Winfield House, UK, in 2019.

“They even lie ON A CHRISTMAS CARD,” user @RiteOnAngiePike added, also referencing the photo from the couple’s state visit to the UK last June.

In the photo from 2019, President Trump is seen wearing what looks like an identical tuxedo, while posing with the same stiff pose and smile as in the official portrait.

Other Twitter users felt that the image just did not look right, with @brethunter9 writing: “Weirdest cut and paste job ever seen.

“They both look two dimensional cut outs/ anime, superimposed onto a screen. DT’s face is from a prior photo. Bizarre until the very end.”

While user @Boucher30032337 pointed to the shadows behind the couple to claim that they did not match, and @sjlstwit said that President Trump was not “looking at the camera.”

The picture is not the first time the couple have been accused of photoshopping their official Christmas portrait, as social media users claimed their 2018 picture had been modified.

At the time, photographer David Arnold told Vogue that the picture looked like it had been blurred, “to reinforce an illusion of reality”.

He added: “If I were editing and I were ever to do a bad job and it looked fake, I would blur the whole thing.”

Rachel 108 days ago
Everything about them is fake.

Oh ya 112 days ago
Not the same photo. Look at his hands but that does not stop the libtards from trying hoping you do not notice
View all comments (2)Add comment