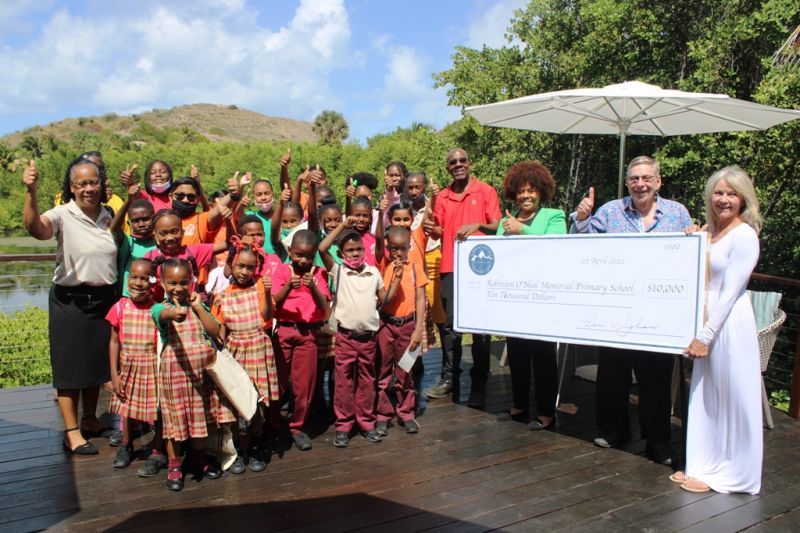 The Robinson O’Neal Memorial Primary School on Virgin Gorda has received yet another generous donation from the North Sound Foundation, which was founded by developer David V. Johnson and wife Pamela of Oil Nut Bay.

A large cheque of $10,000 was donated to the school on Friday, April 22, 2022, in the presence of a group of students and the principal of the school, who were at Oil Nut Bay as part of a tour and the opening of a Nature Centre that coincided with Earth Day.

$$ is for purchase of smart boards

The handover of the cheque was made by Mr and Mrs Johnson, along with Director of Governmental and Community Affairs and Human Resources at Oil Nut Bay, Mr Clyde Lettsome.

There was much delight when Mr Johnson disclosed that the cheque is intended for the purchase of smart boards for the classrooms at Robinson O’Neal Memorial Primary School.

Mr Johnson, the Chairman of Oil Nut Bay, clarified that the North Sound Foundation isn’t just him and his wife. “It is all of our [home] owners that participate generously and we couldn’t do it without all of them.”

‘Never ever give up’- David V. Johnson

Turning to the children, Mr Johnson told them to develop a ‘never ever give up’ attitude, adding that they must always persevere, whether it be hurricanes or pandemics.

“You are only limited in life to the extent of your imagination and whatever you dream you can do, you just have to work hard for it every day.”

The Principal of Robinson O’Neal Memorial Primary School, Norma Creque, could not resist expressing some words of gratitude.

Also present for the cheque handover and opening of the Nature Centre was Junior Minister for Trade and Economic Development Hon Shereen D. Flax-Charles (AL), who said the beautiful edifice of the Robinson O’Neal Memorial Primary School is a testament to Mr Johnson’s keenness for developing not just property, but also local capacity.

North Sound Foundation had reconstructed the school after it was damaged by Hurricane Irma in September 2017.

“Today, as we have many times before and will gratefully do many more times over, we are receiving yet another investment into our youth from the Oil Nut Bay family. Led by the charming and generous David Johnson, this property and its visionary, have been leaders in corporate social responsibility for as long as even I can remember.”

Hon Flax-Charles said fostering community goodwill and development is about more than just altruism, rather it is about creating an economic and social context from which business can be done more productively.

“Affording young people, especially, opportunities is an investment into reducing crime, improving on domestically available human resources, increasing the capacity of the public sector and so much more. Business is bettered when the community is stable, happy and ambitious!

“Mr Johnson, my immense gratitude to you as a representative and more deeply as a Virgin Gordian is followed by my sincere prayer that each generation ushers in more community-minded and generously spirited entrepreneurs like yourself.”

The At Large Representative also told the students to remember the generosity of those who have given to them and even more importantly, “be inspired by it.”

According to the Oil Nut Bay website, Mr David V. Johnson and his wife Pamela have committed to contributing $100,000 to the Virgin Gorda community, with a goal to raise one million dollars through the generosity of Oil Nut Bay homeowners and members of the community alike.

Created by Johnson and his wife, the North Sound Foundation exists to assist local nonprofit cultural, educational, environmental, health and human service organizations throughout the North Sound and Virgin Gorda.

Through a series of grants that empower the community, other organizations, such as the Robinson O’Neal Memorial Primary School, St. Mary’s Schools, KATS, Special Olympics BVI and the BVI Fishing Clubs, have benefited from the North Sound Foundation over the years.

The website added, the North Sound Foundation is especially keen to sponsor children and youth affairs, as it has done repeatedly in the past. 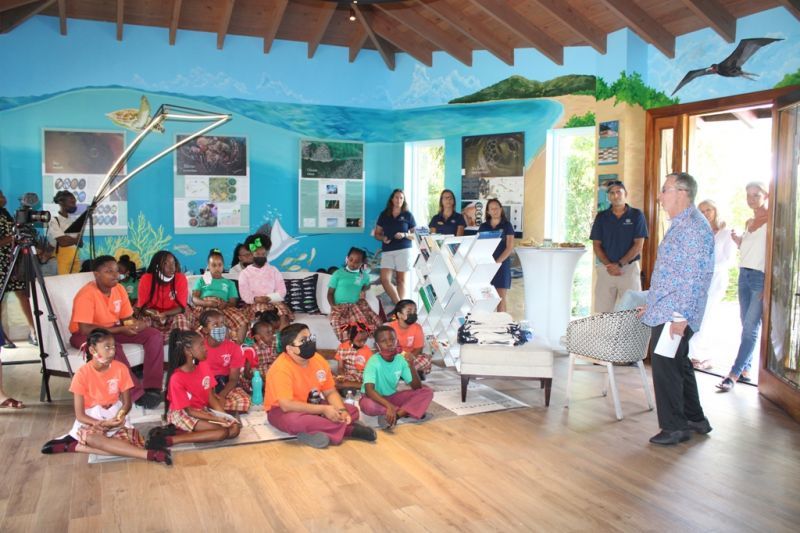 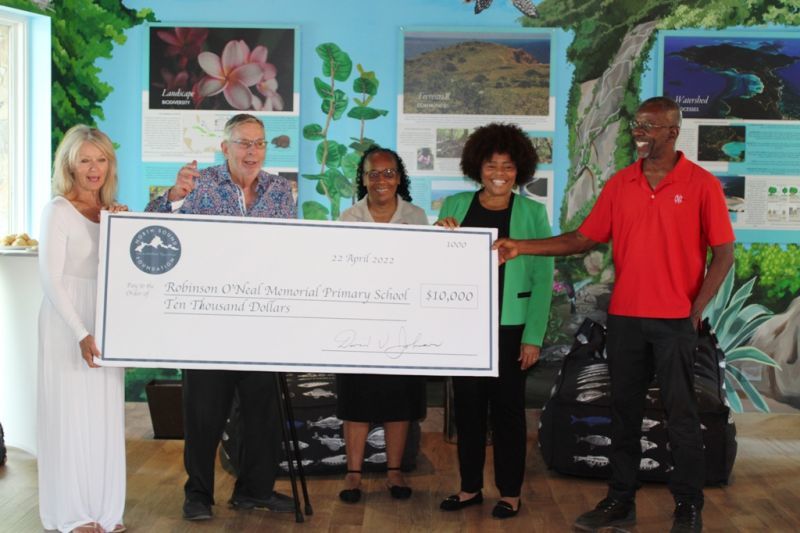